Elsewhere I’ve written about many myths and outdated grammar that people routinely think are correct, and they’re driven crazy by authors who are “wrong.” In some cases the authors are wrong, in many cases they are right and the reader is wrong, and in many other cases, either way of saying it is fine.

Having received such letters, as all writers do, I’m the last person who wants to be picky about either grammar or punctuation. But let me choose an example that may be the single most often misstated term in punctuation. That’s the backslash versus the slash, which is now often called the forward slash. At least 90% of the time these terms are used, it’s incorrect. For instance, people in radio and on TV habitually say “backslash” when referring to website addresses.

Suppose someone wanted to link people to my different books on Heaven. They could write http://www.epm.org/heaven. That is correct as written (even though in most cases you don’t need the http:// or the www, but there are exceptions).

What is incorrect is when it is spoken like this, as it’s often done in radio interviews: “See http colon backslash backslash www dot epm dot org backslash heaven.” Though it’s nearly always stated this way it’s exactly wrong—those punctuation marks, “/,” that are referred to as backslashes, are actually not. They are forward slashes.

This illustration may help to get it straight:

Assume a person is walking the same direction we write in English and most (though certainly not all) languages, from left to right.

The reason for this common error is probably that in handwriting, most people making a true forward slash begin at the top, which is to the right, and move to the bottom which is to the left. Hence, since in English we write left to right, they are moving backwards to make a forward slash! And they usually move forward to make a backslash. The confusion is understandable, but if you think in terms of the person walking to the right, as above, it should always be clear.

Anyway, it makes no difference what we call slashes if it’s written correctly. But when web addresses are given audibly, it can get confusing. When someone is telling me on the phone to enter a backslash, I usually guess they probably really mean a regular slash (forward slash), but then, maybe they don’t… Trial and error gets it right, but a correct use of terminology would help. 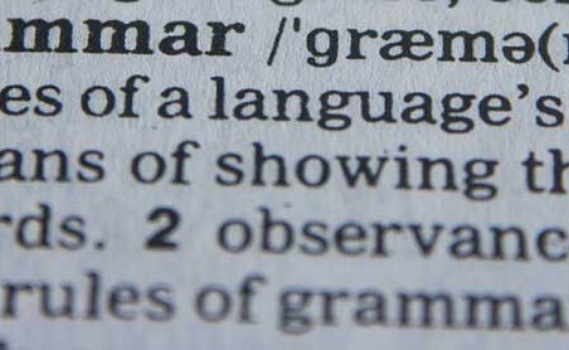 Some Thoughts on Grammar and Word Usage

article March 18, 2010
Like most authors, I receive a fair number of letters dealing with fine points of grammar, and whether a word I’ve used actually qualifies as a word.
Invest in Eternity