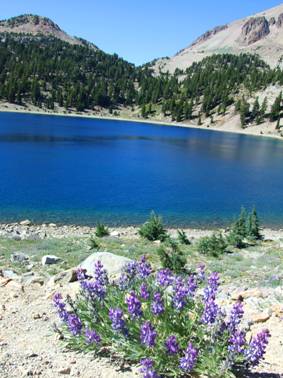 Here’s a photo I took Saturday on Mount Lassen, at about 7,000 feet. The lake, the flowers, the sky—beauty popping up out of barrenness, all declaring God’s glory.

Many thanks to Sarah Anne Sumpolec and Ann Tatlock, whose thoughtful guest blogs on Harry Potter were the perfect follow-up to my blog about HP. We’re moving on now, so no one thinks Harry’s our main issue, which he’s not. But if you didn’t catch Ann’s blog, after Sarah’s, be sure you flip back and read it, as it was excellent.

Speaking of vacations, which I’m about to, my daughter Angela Stump wrote a wonderful and entertaining reflection (she’s a marvelous writer) on the vacation she and Dan just returned from. She compares Maui to Wood Village, Oregon, where she and her family live. Check it out at http://dastump.blogspot.com/2007/08/maui-ha-or-wood-village-or.html

Nanci and I are VERY grateful for the last eight days of our lives. We just arrived home Monday night. On the drive home, we listened to the Focus on the Family-produced radio dramas Billy Budd and Les Miserables, which were wonderful. (We LOVE those Radio Theatre dramas; see www.radiotheatre.org and poke around the site to see all the productions; everything from Bonhoeffer to Narnia to the Secret Garden and Christmas Carol and everything else we’ve heard is just great.) 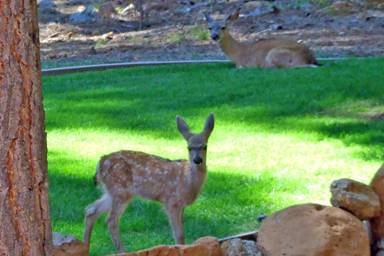 Okay, so Nan and I had a great time vacationing at the home of great friends in California. These deer were in their back yard. Cool.

We ate lots of good food, took bike rides, saw the movie “The Bourne Ultimatum” (we loved it), and enjoyed several divine appointments, including one with a sixty-six year old Down Syndrome man who is nearly blind and has cancer. Nanci watched “Pirates of the Caribbean” with our friends’ kids, and won their hearts with her fun-loving spirit and contagious laughter.

I videoed Nanci passing me by on a four wheeler. This is her. No stunt double:

Three days in the middle of our vacation were hard work for me, but fun nonetheless. We went over every line of the first draft of a screenplay based on my novel Deadline. The creative juices were flowing and with the synergy in the room, we came up with some new scenes and strengthened scenes that we were all excited about. We really feel good about what will become the second draft.

Last year I requested that my good friend James Scott Bell (www.jamesscottbell.com) be hired as screenwriter for Deadline. Jim’s a fine novelist and writes a regular column for Writer’s Digest Magazine. He’s working right now on the second draft, based on our input. JSB took copious notes as we (including Jim) kept coming up with ideas. While the second draft will be a lot of work, Jim’s up to the task.

One of the great joys last week was those three days of working side by side in the living room with two brothers who truly love Jesus: Jim Bell, screenwriter, and Chuck Norris, whose background in film and television has included hundreds of occasions of reading through scripts start to finish. Chuck, who was touched by Deadline years ago and has long wanted to make it into a movie, read aloud every page and every line of the Deadline script, which we then analyzed and edited.

I believe creativity is part of being made in God’s image, and the interchange was often exhilarating. But the greatest highlights to me were when we’d stop and pray together and ask God for insight, and then later thank God for a scene He’d just given us. Working two nights until 10:00 PM, we stopped periodically to rededicate ourselves to our Lord and give the Deadline movie over to Him.

Scripture says, “As iron sharpens iron, so one man sharpens another.” We had differences in our approach to what should and shouldn’t be included in various scenes, but those differences worked together for good in our collaboration. (If we didn’t have those differences, two of us would have been unnecessary!) There was a creative synergy, but it’s more than that. There was a deep-seated sense of spiritual oneness and dependence on Christ, and the Holy Spirit’s direction.

Before Jim left, and Nanci and I resumed our vacation, Chuck and Jim and I got on our knees and grabbed each others’ hands and thanked God for His faithful direction. We really felt His presence those three days. He was so good to us, answering prayer in immediately measurable ways.

This meant a lot to me because I’ve heard horror stories related to movie scripts and people who “don’t get it” when it comes to holding to standards of morality, worldview and language. The unequal yoke has killed many projects. We want a powerful story with a strong message. We also want quality film-making. While we know that won’t be easy, the three of us were and are all on the same page. We desire to honor God by making a movie that will not glorify sin and bring shame to Him, but instead glorify Jesus. The nature of the subject matter (conversion and pro-life) will guarantee some negative reviews (that’s an understatement), but Jesus is the one Reviewer whose opinion ultimately matters. If hearts and lives are touched for eternity through an entertaining movie, we’d rejoice.

I have no illusions, and don’t presume upon the final product, knowing most “future movies” never get made and most that are fail to live up to expectations. But after years of roadblocks, I am filled with gratitude to God that we’ve gotten this far staying focused on Christ. I’m especially grateful that I believe God has been glorified in the process, which, based on the many stories I’ve been told, is often not the case in the moviemaking process. No matter what happens or doesn’t from this point, God’s hand has been in this, and I’m grateful.

If you feel so led, I would deeply appreciate your prayers for the Deadline movie, and for Chuck and myself and the others who will be involved. (Next steps include finding the right financial backers and production team). And please pray right now for Jim Bell as he does the screenplay rewrite. We are asking God to do something powerful and life-changing, not for our glory, but for His.

Meanwhile we’re looking forward to the imminent arrival of our daughter Karina’s second son, Jack. In fact, five hours after we arrived home, we got to see Karina and Dan and Matthew in the middle of the night, since she was experiencing contractions! They dropped off Matthew, groggy and wearing his Dodgers cap, at 2:00 AM.

The contractions subsided, but not before Karina went to the hospital, only to find working in the emergency room her sister, our other daughter, Angela! What a blessing. And the bonus is we got Matthew for the day and the night. In the morning I read him the same Curious George books I read to his mom and auntie when they were his size. (We also read a Veggie Tales book, which wasn’t around 25 years ago, but they’re everywhere now, aren’t they? Matt and I learned, alongside Junior Asparagus, to overcome fear.) 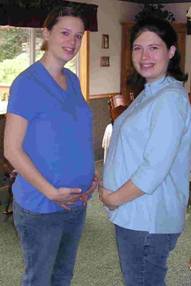 Next week, maybe Wednesday or Thursday, I’ll be back with something I’d originally planned for this week. I think you’ll like it: the blessing of gratitude and the curse of complaining.

And speaking of gratitude, I thank God for our wonderful daughters. Here they are three years ago, both pregnant with their firsts, Jake and Matthew. Thank You, Lord, for your incredible kindness. May all four of these boys love you with all their hearts, and may You use their parents, and grandparents, to show them the grace and truth of Jesus. And may Your hand especially be on Karina and little Jack, yet unborn, but already appointed for your eternal purposes.

We will tell the next generation
the praiseworthy deeds of the LORD,
his power, and the wonders he has done.

He decreed statutes for Jacob
and established the law in Israel,
which he commanded our forefathers
to teach their children,

so the next generation would know them,
even the children yet to be born,
and they in turn would tell their children.

Then they would put their trust in God
and would not forget his deeds
but would keep his commands. (Psalm 78).

Are any of Randy's Books Going to Be Made into a Movie?

article January 18, 2010
There has been much interest in making Randy's book Deadline into a movie. In fact, the screenplay has already been written.
Invest in Eternity