Bonhoeffer Resources and Lessons for Today 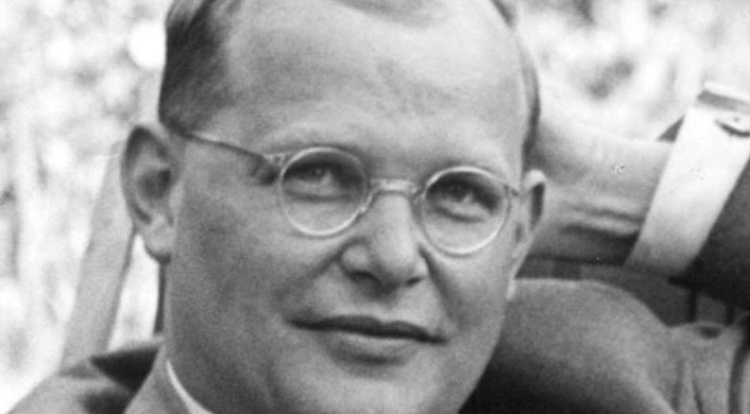 This photo is of Dietrich Bonhoeffer in Tegel prison, prior to his move to the notorious concentration camp of Buchenwald. Though visits weren’t frequent or long, at Tegel his parents and his fiancé Maria were sometimes allowed to bring him books, such as the one in his hand.

One of the great joys of Christmas for Nanci and me, and many of you, is being with family. Dietrich knew that most of his family and his Maria were gathering for Christmas, while he couldn’t. He wrote from prison this thought about Christmas:

A prison cell, in which one waits, hopes… and is completely dependent on the fact that the door of freedom has to be opened from the outside, is not a bad picture of Advent.

The analogy is good because for the moment we are all confined to a place where freedom is restricted, sin is rampant and injustice and suffering surround us. But Christ came into this world, from the outside, unlocking a gate to freedom we could never have unlocked ourselves.

In my previous blog I recommended that 1048 page biography of Bonhoeffer by his best friend Eberhard Bethge, who devoted his life to compiling Bonhoeffer’s writings and history. It’s not only a fascinating book; you can use it for strength workouts or self-defense.

I have two documentaries, a dramatic stage presentation and a movie about Bonhoeffer. All four are quite good in their own way, but if I were to choose only one of them it would be the 2003 documentary, available on DVD. It’s called simply Bonhoeffer: Pastor, Pacifist, Nazi Resister on DVD.

Directed by Martin Doblmeier, this documentary deals with Bonhoeffer’s life, times, writings and death. It contains much fascinating old footage, both black and white, and color. Bonhoeffer’s biographer Eberhard Bethge and Bethge’s wife Renate, Bonhoeffer’s niece, are among those interviewed. It also includes some of Dietrich’s students. Hearing these personal reflections and anecdotes puts you right there. 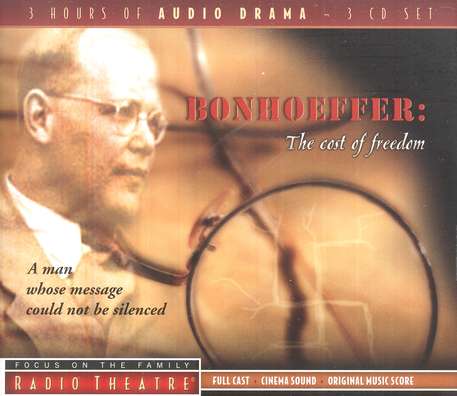 Last month Nanci and I listened to something we highly recommend: Focus on the Family’s radio theatre production called Bonhoeffer: The Cost of Freedom - Focus on the Family Radio Theatre audiodrama on CD. It’s three hours of drama on three CDs. You can click on the Real Audio or Windows Media buttons at this link to hear a three minute excerpt.

This drama is really excellent, as are nearly all the many Focus on the Family Radio theatre productions. They’re a great way to experience some non-television entertainment that’s educational and profoundly moving, and generally superior to anything you’ll see on TV. Radio theatre engages the whole family’s imagination in ways videos usually don’t.

In the previous blog I spoke of The Cost of Discipleship and Bonhoeffer’s reflections on cheap grace. Here’s more of what he wrote:

Bonhoeffer rebukes the church for dispensing cheap grace: “In such a Church the world finds a cheap covering for its sins; no contrition is required, still less any real desire to be delivered from sin.”

I don’t always agree with Bonhoeffer, but I certainly do here. God tells us, “He who conceals his sins does not prosper, but whoever confesses and renounces them finds mercy” (Proverbs 28:13). Renounces is a decisive word, indicating the utter unacceptability of sin among God’s children. We must learn to offer grace without minimizing sin.

The story illustrates the difference between confession and repentance. Confession is not genuine when we plan to repeat the same sin, or when we make provision to commit it (e.g. going back to the computer where you viewed pornography, with no new restraints in place). True repentance is measured by change, and change always involves taking decisive action to prevent the sin from recurring (e.g. having an accountability partner lock you out of the computer so you can’t use it except in the presence of someone else who has the password, or getting rid of the internet connection altogether.)

Real grace doesn’t let us rationalize and continue in sin. Rather, it empowers us to forsake sin. “The grace of God that brings salvation…teaches us to say "No" to ungodliness and worldly passions, and to live self-controlled, upright and godly lives” (Titus 2:11-12).

Contrary to this passage, countless contemporary Christians, priding themselves on not being legalists, imagine grace says yes to everything. They proudly sin and joke about sin, and are entertained by sin, all in the name of Christian freedom. They turn their back on the life of discipleship, becoming sin’s slaves. I’m not talking about violating the arbitrary taboo checklists of traditional churches or modern day Pharisees. I’m talking about dishonoring the very commands of Scripture itself (see Ephesians 5:3-21, for instance).

In Germany cheap grace was bestowed on people for showing up at church and getting baptized, going through confirmation and taking communion. Many people, including Bonhoeffer’s parents, rarely attended church, but considered themselves Christians. They baptized and confirmed their children, as their parents had done to them.

Some Americans boast of our heritage in such godly men as George Washington. Germany boasted in its spiritual heritage in Martin Luther, the great reformer. Germany was, after all, a Christian nation. (Never mind that Luther’s anti-semitism was shared by many in the German church.)

Some thought themselves worthy of God’s grace because they were born German. Their country was God’s country. To be German was to be proud and entitled and persecuted by inferiors and determined to rise up and show the world that Germany would not tolerate the humiliation laid upon it through the treaty of Versailles, after losing World War I. 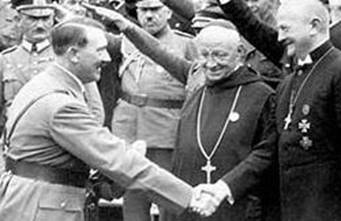 In the Germany of 1937, state churches embraced false doctrines that endeared religious leaders to the Nazis. Christ was reduced to a tribal deity. In the Bonhoeffer documentary I recommended, to me the most chilling picture was of Hitler publicly shaking hands with charmed and smiling church leaders. (One of these men is Reich’s bishop Mueller, who Bonhoeffer speaks of, with skepticism, in that three minute excerpt from the radio drama mentioned above.)

Instead of correcting Germany’s proud nationalism with a spirit of Christ-centered humility and boldness, the church became Germany-centered. Consequently, the church could not stand apart from Germany, in Christ, to challenge or rebuke or change Germany.

Acting like politicians rather than prophets, most church leaders refused to stand against the nationalism, militarism and bigotry of the Nazis. Instead, they were Nazified, becoming like the world instead of becoming like Christ and confronting the world. Instead of declaring war on evil, the church became an instrument of evil.

In my third and final Bonhoeffer blog next week, I’ll make more applications to the American church, and why we must be careful not to be America-centered, but Christ-centered. We dare not let our identity as Americans eclipse or confuse our identities as Christ’s followers. I’ll also talk a little about Bonhoeffer’s remarkable fiancé Maria van Wedemeyer, and contrast two deaths that happened exactly three weeks apart: Dietrich Bonhoeffer’s and Adolf Hitler’s. 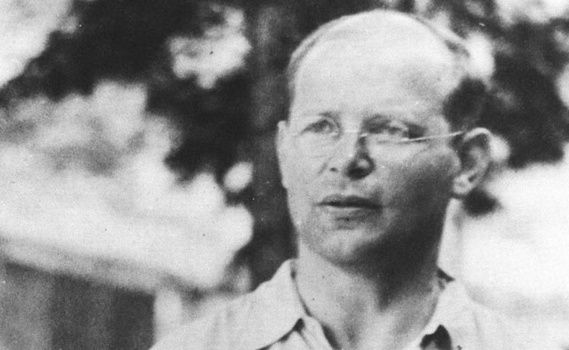 Dietrich Bonhoeffer: Final Thoughts on His Life and Death

article December 18, 2007
Before we get to Bonhoeffer, I want to make some observations. If you want to shorten your read and move to the Bonhoeffer part, skip these first nine paragraphs.
Invest in Eternity