Okay, here's a non-Tuesday post. I hadn't planned on it, but I'll throw it in because of some things God graciously did. Then next blog I'll go back to finish up some things that happened in Atlanta at booksellers' convention.

Yesterday was one of the most exhausting days of my life. I stood in front of a video camera nearly the whole day, answering questions about Heaven, covering nearly all the major subject areas addressed in my books.

Tyndale House Publishers hired a film company to produce a DVD to accompany my Heaven book; it’ll be a resource both for group and personal study. It’s being made in light of all the churches and small groups who are now studying the book. I think it may be released in January.

For the video shoot the last few days, I was on camera in my office, in our neighborhood, on the Columbia Gorge, in front of bridges and waterfalls. I even had to answer questions the majority of the time I was driving, on I-84 and the old Columbia Gorge Highway. (I did bring my camera, and got some quick shots in while they were setting up; no grandchildren in this blog, but I'm going to throw in a gratuitous dog, a Vizsla, who was hanging out at a waterfall.)

We traveled in three vehicles, a grip “truck,” the crew van, and our old Subaru wagon. In my car were the sound guy and director in the back seat, and cameraman in the passenger seat. He also climbed into the back seat, while I was driving, to film over my shoulder. (“Okay, adjust the rear-view mirror so you can see the camera lens, then turn your head slowly from the left and look at it in the mirror when I give the cue.”)

Since the film crew was from California, they were depending on me to get them to particular beautiful places on the Gorge. I was trying not only to compose answers to the questions, but to avoid taking wrong turns. While periodically looking at the camera lens in the rear-view mirror while driving windy roads, I was also trying not to make the evening news with “California film crew perishes in Columbia Gorge.” Given some of the cliffs as we wound our way up to Crown Point, the final footage as we plunged into eternity might have been impressive, but not worth it. 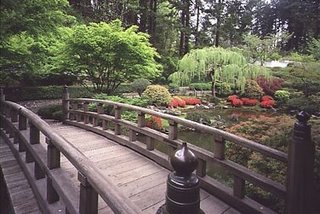 The day before, the film crew had been to the Japanese Gardens in Portland, especially to film the bridge that’s on the cover of the Heaven book. This photo is that bridge from a different angle than seen on the cover. Of all pictures in the world that could have been placed on the front page of the Heaven book, it was from Portland and neither the publisher nor I knew that until a reader pointed it out to us after the book had been out for a year.

This makes three days of filming we’ve done on this project, and hopefully it was the last of it. Now all the big work is theirs, in the editing. We started the filming with a day in June, which involved a lot of “B roll” of me with Nanci and Karina and Angela, and our grandsons, and with our dog Moses, with my friends Stu and Steve, me playing tennis with some guys I coach, etcetera. It was all these “act naturally” situations where we were instructed how to act naturally in highly specific ways.

It was uncomfortable for me because I felt like everybody was being inconvenienced, kids were taken past nap time, etc. The challenge was all the starting and stopping when you're outside. Filming and refilming is time-consuming. The sun comes out from behind a cloud, a dog barks, a horn honks and it’s “cut,” then start over. But everybody had good attitudes, or at least managed to keep any bad attitudes unnoticed. I thanked everyone and gave Moses a bacon flavored doggie treat, which is coincidentally what Ollie gives his dog Mulch in my novel Deception.

I’ve learned that though I’m glad to answer a question once, repeating an answer or starting over when I was just one line from finishing the answer—hour after hour—is just plain exhausting. It’s much easier to go on to a new question than to try to repeat an answer. By the end of the day whenever they would say “it’s take three; repeat what you just said,” I would respond, “Okay….so what did I just say?” I couldn’t remember. 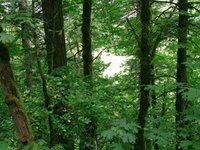 Maybe the best thing about the last two days of filming was the divine appointments. It reminded me of the time two years ago the History Channel interviewed me for almost three hours, to get ten minutes for use in a program on Heaven and how to get there (no kidding). There were three guys in the crew, and maybe the primary purpose wasn’t those reached by the end product, but the three nonbelievers I connected with in the filming process.

Similar situation the last two days. It was a crew of six: director, first camera guy, second camera guy, sound man, the grip and a guy who did light control and whatever else needed to be done (maybe there’s a name for it in the biz, but I don’t know it). The two believers were the director and myself. They’re all professionals, guys I really liked, and all respectful, but definitely not on the same page when it comes to Jesus, God’s Word and the afterlife. We joked a lot and bonded so it made the controversy civil.

A couple of them acknowledged they didn't believe in one God or objective truth or moral absolutes. I tried to respectfully point out they were kidding themselves, pressing them on whether they thought genocide, for instance, was a moral evil. When they hesitated to admit it, I suggested that deep inside they knew it was; they just didn't want to acknowledge there are any moral absolutes, partly because it would suggest a standard outside themselves, namely God, and might have implications for the way of life they've chosen. But relationships remained good, and by the time the day was done we hugged and back-slapped like old friends. 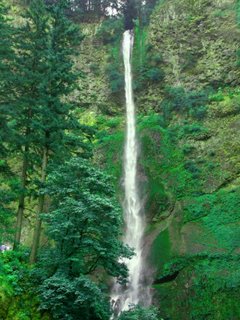 As for the setting….here we are in the beauty of God’s creation in Oregon, with greens so green and forests so deep and waterfalls so majestic you can’t believe it’s real, and I get to talk about God the master artist and how this world under the curse hints at what the original was, and is a shadow of the redeemed beauty of the coming New Earth. The crew was blown away by the beauty of the place. One of the guys was seriously asking about cost of living in Oregon, because he’s thinking of moving here.

I spoke of Romans 1:20 which says, “For since the creation of the world God's invisible qualities—his eternal power and divine nature—have been clearly seen, being understood from what has been made, so that men are without excuse.” I talked about how we would respond to someone who claimed that a gorgeous painting of all this formed itself on the canvas over millions of years.

I asked how we could imagine then that such a thing could account for the original art work of creation itself, which is far more complex and intricate, and far greater art than any rendition. I took the picture of this dog—but God actually created the dog. And human beings were involved in developing the breed. The point is, from God to the human beings, without intelligent design that beautiful dog just wouldn't exist. No way. (Okay, so the Vizsla wasn't gratuitous after all. Cool.)

The fact that I had this captive audience of the film crew reminded me again of Acts 17:24-28, especially the part about God appointing our times and places (as he appointed the times and places for me and this—in my opinion—film crew that was hand chosen by God):

"The God who made the world and everything in it is the Lord of heaven and earth and does not live in temples built by hands. And he is not served by human hands, as if he needed anything, because he himself gives all men life and breath and everything else. From one man he made every nation of men, that they should inhabit the whole earth; and he determined the times set for them and the exact places where they should live. God did this so that men would seek him and perhaps reach out for him and find him, though he is not far from each one of us. 'For in him we live and move and have our being.'” 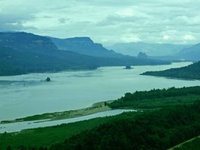 So for a day and a half, these guys getting paid was dependent on them having to listen to me talk about Heaven and how to get there. And thanks to the array of questions from one of them who's an outspoken skeptic (and a guy I love), I got to share the gospel and address the claims of Christ yesterday over chicken salad croissants at Multnomah Falls!

We wound up the day at dusk on the Gorge, a beautiful sight. For the last picture of the filming they suggested everyone spontaneously point the direction of their choice. As it turned out, we all pointed different directions. I don’t think the cameraman who suggested this realized how fittingly symbolic it was of our conversations concerning the truth, and where we can find the answers…and how contradictory and confused we really are! 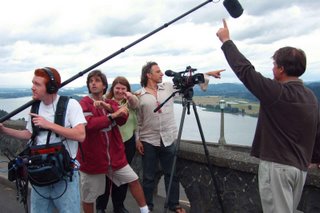 One of the crew said to me that he found the filming fascinating, and was very interested in the subject matter of Heaven and the New Earth. I gave him, and the others, several copies of my books, and am praying for works of God’s grace in their lives.

I can’t vouch yet for the finished video product, though I hope it will be strategic for the kingdom. But I can vouch for some of God’s purpose in those two draining days.

And I’m praying that one day I’ll walk on the New Earth with one or more of these guys in the film crew. I pray that we’ll stand together and see the risen Jesus, in that place He’s prepared for us. I know that if we do, on seeing Him and His new creation, we'll give Him full credit as the Headwaters of Joy, and the Primary Source of all the lesser streams of beauty, in this world and the next. 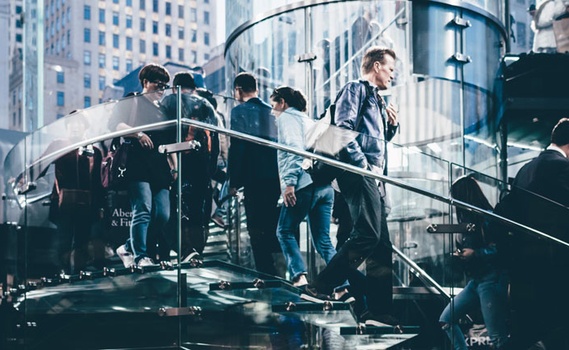 video August 4, 2010
Check out this video produced by a company I really respect, Chick-fil-A. I think it’s very moving. It reminds me of the divine appointments God gives us daily.
Invest in Eternity