I'm interrupting my new series of blogs on longing. Why? Partly because today, January 22, is the 35th anniversary of Roe v. Wade, the most tragic judicial decision in American history. It’s also the annual March for Life, which I’ve participated in, and where my heart has been today.

Here is coverage of the event from today’s Washington Post online. Note that the Post entitles the article, “A Youthful Throng Marches Against Abortion,” reporting a large percentage of the participants were teenagers. I find that very encouraging.

Smaller events happened today throughout the country. Just a moment ago I checked email and found this comment submitted to our website, which brought tears to my eyes:

I marched in the Stand For Life today in downtown Macon, GA.
I am now volunteering at Covenant Care Services, which is a Christian
adoption agency and is active in the pro-life movement. You were a large
part of my inspiration to become involved. Thank you for your ministry.

Thank you, Amanda. I can’t tell you how much that means to me. And speaking of being brought to tears, Nanci and my precious friend Diane Meyer wrote a powerful story today on her blog. Diane will always be to us something between a daughter and a little sister. Our daughters were two (Karina) and about-to-be-born/just-born (Angela) when she lived with us.

Diane’s blog reminded me that our EPM website has a wealth of resources to inform and equip concerning the sanctity of human life.

Now I need to answer some reader questions. While most of you have been understanding and supportive of my need to moderate comments, some have gotten pretty upset that I’m no longer posting their comments. They feel this is wrong, and want an explanation.

To be honest, I hate moderating. In fact, I’ve just delegated this task, so I will no longer be making the call on what’s posted and what isn’t. I detest being in the position to have to say yes to someone complimenting my books, for instance. But the alternative is rejecting their post, and that doesn’t seem right either. I liked it much better when everything was automatically posted.

But we were receiving a barrage of inappropriate and repetitious comments, some theological, but most political or personal. I have received countless political attacks against Mike Huckabee. Most of these are from people who have no interest in the Eternal Perspectives blog, but who use Google Alerts to find any mention of Mike Huckabee, and go to those blogs to register their opinions, which are often cut and pasted from websites dedicated to electing one of Huckabee’s opponents.

Here’s my suggestion. If you support a particular candidate, start your own blog and talk about him. Say whatever you want. And if you support Ron Paul, Rudy Giuliani or Mitt Romney, or one of the Democratic candidates, I promise I’m not going to come over and flood your blog with arguments against your candidate. (Notice I didn’t mention Fred Thompson. That’s because he withdrew from the race today. Maybe the pro-life vote, which in my opinion shouldn’t have been split in the first place, will be less split now.)

You can say whatever you want to on your blog. I will be the first to defend your right not to post any and all comments I might want to make on it. Why? Because it’s your blog. I have no rights whatsoever concerning it, any more than I have rights concerning your house, car, lawn mower or dog.

Suppose you’re supporting Mitt Romney or Ron Paul. On your front lawn you place their signs. What would you do if you got up in the morning and found a dozen Mike Huckabee signs planted across your yard? I’ll bet you’d pull them out, wouldn’t you? And what would you say to any Huckabee supporter who argued “you have no right to remove the signs I put up!” You’d say, “Hey, it’s my front yard, not yours.” And you would wonder, “Why don’t those Huckabee people put signs on their own front lawn, and leave mine alone?”

My blog isn’t the world’s greatest. But it is my blog. It is not a public sidewalk. It's someone's front yard. I welcome people here to pull up a chair and sit and talk on the lawn, and to feel free to engage in spirited conversation and raise points of disagreement. What I don’t welcome is people coming to tear up the front yard by repeatedly placing multiple signs promoting their candidates, and essentially attempting to remove the signs I’ve put up.

Many gripes against Mike Huckabee have been posted before in this blog’s comments. I’m just not going to do it anymore. It’s not that I don’t think the accusations can be answered. I’m convinced they can be, and have been. I just don’t have time to respond to them all, and no response implies there aren't good answers. 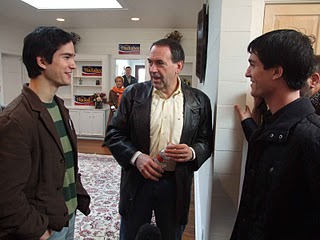 Several weeks ago, I accepted two lengthy comments criticizing Huckabee, then posted my responses. Not only did it not accomplish much, it was time-consuming. If you want to see Mike Huckabee’s actual positions, and answers to the popular attacks against him, go to Huck’s Army, a website formed by Alex and Brett Harris, two nineteen year old brothers who are good friends of our family (we flew home from Texas with them last night; I took this picture of them Sunday with Governor Huckabee in the media room at the Norris ranch).

I’ve posted lots of comments I disagree with, and which disagree with me, and I will continue to. But here’s what we are no longer publishing:

1) the same political hit pieces which anyone can easily find elsewhere.
2) Accusations against people, including other commenters, that are harsh, abusive or unfair.
3) Comments which advocate bad theology, untrue to God’s Word. 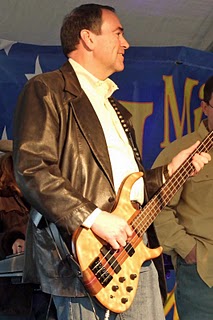 I so much don’t want to discourage comments, and the majority of you have been great, including most who’ve disagreed. I really don’t mind disagreement, in fact I often appreciate it. What I’m weary of is the over-the-top accusations that I see Christians believing and passing on without appearing to ask about whether the source of their information has vested interests in the particular candidate’s defeat. Just because stuff is being said by conservative talk show hosts and is posted on the internet doesn’t mean it’s true. Listen to the critics, but listen to the candidates and evaluate their responses. Do it for Ron Paul, Rudy Giuliani, Mike Huckabee and everybody else. People tend to be cynical toward candidates and gullible toward their critics, when we need to be as discerning about the critics as the candidates.

Nanci and I met Mike Huckabee in Texas this weekend at the Norris ranch. No, I was not star struck by Mike or any of his supporters, including Chuck Norris. who we have long known and appreciated. (BTW, I made the decision to support Mike H. last August before he’d received any celebrity endorsements.) Prior to the event, before the media gathering, I talked in a private living room with Mike and two others. Three of the four of us there, including Mike, were former pastors. It was a very warm and meaningful time.

I read Colossians 3:23-24, “Whatever you do, work at it with all your heart, as working for the Lord, not for men, since you know that you will receive an inheritance from the Lord as a reward. It is the Lord Christ you are serving.” 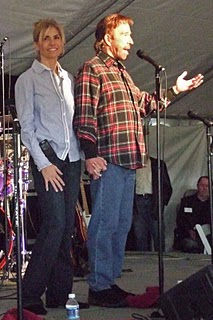 I thanked Mike for standing boldly for the sanctity of human life. I told him that while people endorse him for lots of good reasons, for me abortion is the defining issue, because God condemns the shedding of innocent blood. As I’ve said, I believe God will hold our country accountable for it, and we have no hope of his blessing unless we stop killing children. I won’t quote what Mike said, because of everything people do with quotes. But I couldn’t have asked for a more compassionate, biblical and heartfelt response. He has been unapologetic in his defense of innocent children, and frankly he is the only candidate I trust to truly defend them.

Mike Huckabee struck me as a genuine, intelligent, upbeat, good-humored brother in Christ. He has a quick wit and a quick smile. I believed he was a man of principle before we met, and I believe it even more now. I’ve met many people who look good from a distance, and don’t look so good after you spend time with them. I’ve been disillusioned by what I’ve seen when actually sitting down with well known people. But sometimes it’s the opposite, and that’s how it was with Mike—I became more appreciative, not less. (And no, I didn’t ask for his autograph. I’m not a fan, I’m a supporter; this country doesn’t need a celebrity, we need a servant-leader.) 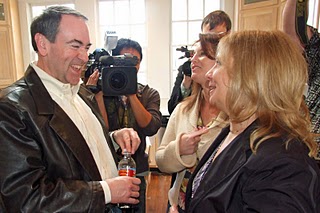 Nanci and I got a kick out of the fact that when his rock group “Capitol Offense” played (they were very good, by the way), Mike kept wanting to play one more song even though his staff was wanting to wind up the event. Mike was just having a good time…you know, like real people do. (Note the picture in which Nanci is cracking Mike up. She does that to me too.) 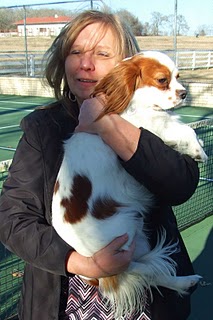 We also enjoyed the fact that they brought their three dogs to the ranch, because Mike and Janet missed them so much after being on the road so long. They (the dogs) stayed on the tennis court during the event. As I told Mike later, it wasn’t meeting him and Janet that Nanci was most excited about, it was meeting their dogs.

Well, in the next blog, hopefully by this weekend, I’ll return to the subject of longing. And maybe this will be my segue: politics as we know it, in this fallen world, are necessary, but they are NOT what the human heart longs for!

Looking forward to thinking more about longing, especially the longing to see our only ultimate and flawless Leader, who will sit on the throne of the New Jerusalem: Jesus Christ, King of Kings and Lord of Lords. 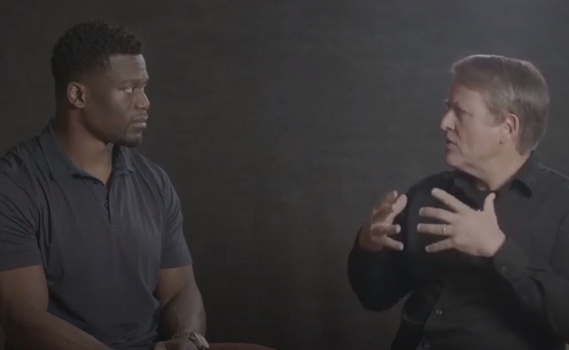 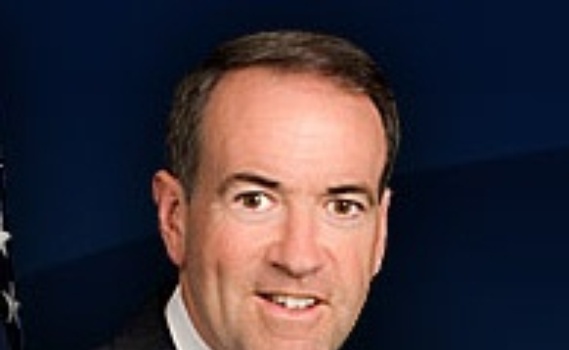 Why I Support Mike Huckabee for President

article November 6, 2007
First, some background, so you know where I’m coming from—and not. In fact, most of this blog will be background, and the following blog will deal more with Mike Huckabee and his opposing candidates.
Invest in Eternity