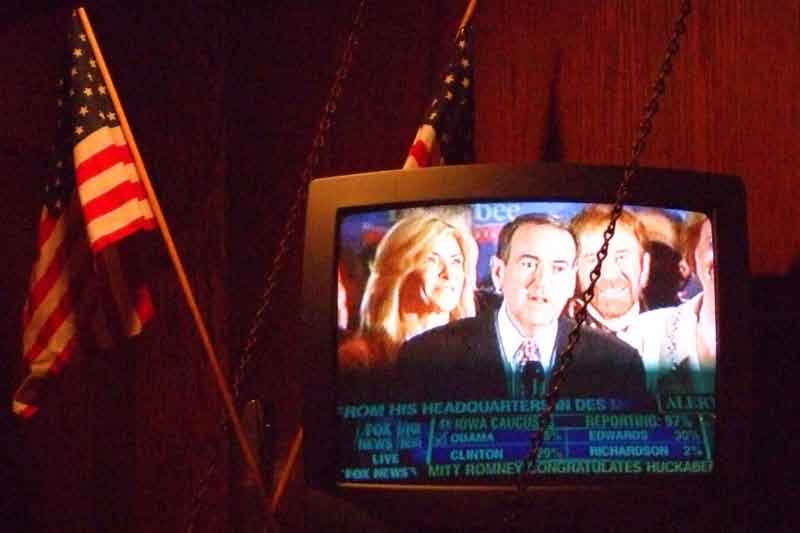 I've assembled some holiday family pics and was about to post them, but will wait a few days in light of current events.

I haven't said anything about politics since the three November blogs about the prolife issue and the candidates. But last night's Iowa caucus is worth mentioning.

Last night we were with a group of folks here in Oregon, at Heidi's restaurant in Gresham, watching the election coverage. The gathering was hosted by nineteen year old brothers Alex and Brett Harris, who run therebelution.com website, which is in my opinion the best place your teenagers can go online. 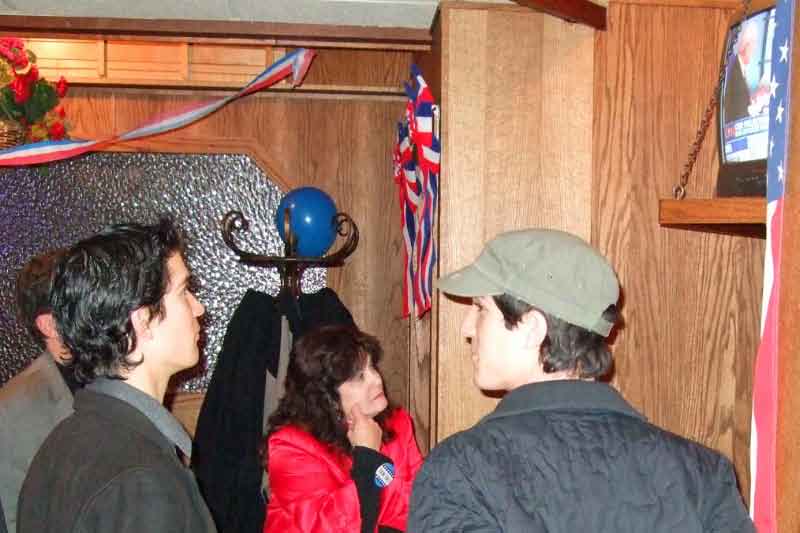 That's Brett and Alex (with the hat), standing together in front of the TV. Below is their mother Sono with my wife Nanci.

Two local news stations came in to interview Alex and Brett, and they're being interviewed today on MSNBC. They're the ones who first told me about Mike Huckabee, and they've invested a lot of time mobilizing young people to support him. 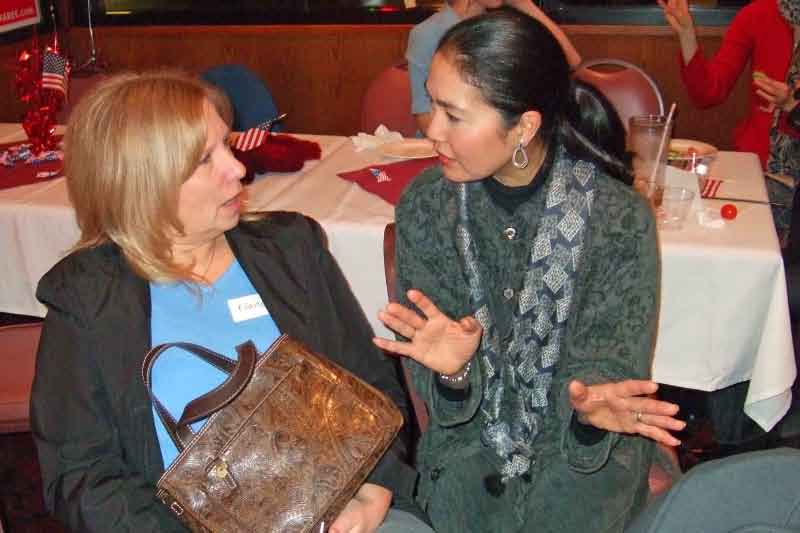 Despite what was touted as a neck and neck race at the end, in which the surging Mike Huckabee appeared to have lost ground to Mitt Romney, Huckabee won significantly.

Yes, this was only Iowa. And no, I don't think there's reason to boast. One of the things I hate about politics is the boasting. Consider Scripture: "They pour out arrogant words; all the evildoers are full of boasting" (Psalm 94:4). The Bible says, "In God we make our boast all day long, and we will praise your name forever" (Psalm 44:8).

I felt Governor Huckabee's address reflected more humility and perspective than a typical victory speech. And of course, there's a long way to go, but last night made a statement that many people are drawn to a man with integrity and grace and a servant's heart, and the ability not to take himself too seriously. (I know, I'll get comments to the contrary, but that's okay.)

So, this isn't about conquest or bragging over victories, which tend to be empty and short-lived. No man is perfect. Mike Huckabee is flawed, as am I and as are you. Our trust should not be in man, but in the only God-man. Here's one of the greatest understatements of Scripture (right up there with "He made the stars also"): "It is better to take refuge in the LORD than to trust in man" (Psalm 118:8).

Isaiah 33:22 says, "For the LORD is our judge, the LORD is our lawgiver, the LORD is our king; it is he who will save us." That about covers it, doesn't it? God is the judicial, legislative and executive branches of the government of the entire universe. Men are not saviors. Only God is. Put yourself first under God's government, and only second under man's.

Yet God delegates to men governmental authority, as Romans 13 makes clear. And in any country He honors leaders who bow their knee to Him and are willing to say and do what is right regardless of its popularity. 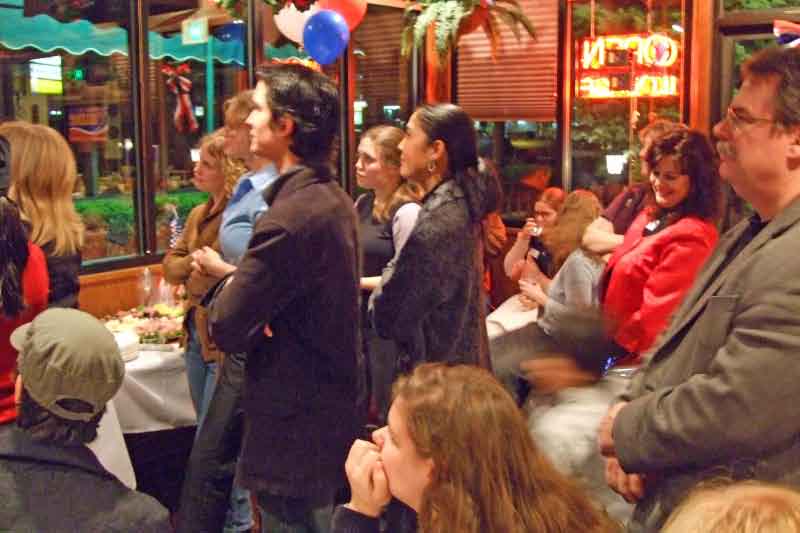 To reiterate, my faith is in God, not Mike Huckabee. But the reason I'm serving on Mike Huckabee's Faith and Family Values Coalition (which doesn't take much time, just phone conferences every couple of weeks) is because I think I should do my small part to shine some light and not just curse the darkness.

So I'm personally thankful for the results of the Iowa Caucus, and I continue to pray for God's purposes to be accomplished.

This morning I got the following email from Alex Harris. I'm reproducing it as is, without editing. The links and suggestions are Alex's, not mine, but if I didn't think this had value I wouldn't be posting it:

What an incredible night. Today, history was made.

Huckabee was up against a Romney campaign stacked with the best consultants, staffers, and media teams money can buy. He was outspent almost 20-to-1 in the state. He was assailed relentlessly by attack ads and mailers over the past month, even though he refused to run negative ads of his own.

It was more than just his opponents. The pundits, the politicos, and the news media all attacked. It seems that the establishment always lashes out at the outsider who brings a message of changing the way things are being done in Washington -- and Mike Huckabee is that man.

Tonight, Huckabee didn't just turn the political landscape upside down, but he's beginning to turn it right-side up. He won convincingly, 34 percent to 25 percent for Romney, despite a near-consensus among the media that Romney's organization would eke out a several point victory.

It was a perfect case of volunteer-driven passion beating out consultant-driven organization. And I believe it's just a start for the man who has more executive experience than any candidate on either side of the race -- with a proven track record of bring Americans together on a wide array of issues.

The mainstream media still refuses to take Huckabee seriously, dismissing his support as limited to "homeschoolers" and "serious religious people." And yet entrance polls in Iowa showed Huckabee with dominating victories, not only among religious voters and social conservatives but also among low-income and middle class voters, women, and young voters — as well as among voters whose top concerns are the war in Iraq, the economy, and immigration.

Now it is time for us to act. No matter where you live, you can play an important role in this election by making a contribution to Huckabee's campaign and spreading the word about him and his victory to your family and friends. No endorsement is more weighty than the one from somebody you know.

Well, that was Alex, and now this is Randy again. Next blog will be holiday pics with the fam. Hope you had some great family times and even if you didn't, that you will experience in this new year the tender love of God your father, and the friendship of brothers and sisters in Christ. 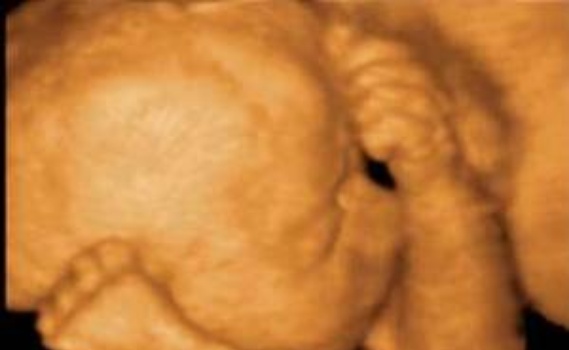