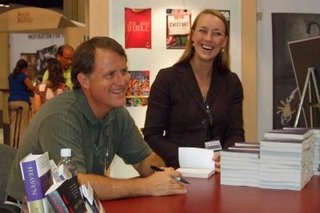 Every July I leave Oregon at one of its most beautiful times of the year, to spend a week of my life in a very hot place, such as Atlanta, or this year, Orlando.

I'm glad to do it, just wish it was in January!

First, I go to a retreat for Christian novelists. There are about two hundred of us in an online group, and about sixty of us enjoy seeing each other face to face once a year before the Christian booksellers convention.

Here's my friend Jim Bell standing up front, with a few other writers in view, including our sister Robin Lee Hatcher. Jim wrote the screenplay for Deadline, and we had fun working through the script together, with Chuck Norris, last summer. Don't know whether the Deadline movie will ever materialize, but we're glad to trust God for whatever He wants. (I'd much rather have no movie than the wrong movie.) 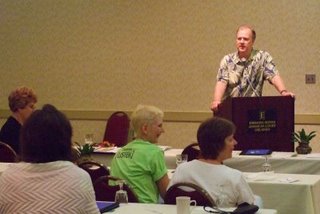 One of the highlights of the novelists' retreat is the "Rotten Review Contest." Tammy Alexander, third from left, won the award this year with a scathing reader review that contained the now famous statement, "Something is terribly wrong." (Words we kept repeating the whole weekend.) Tammy received vindication the next day when the same book won its category in the Christy Awards. 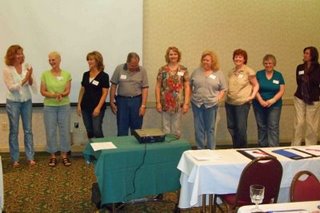 Speaking of the Christy Awards, my companions for that event were Creston Mapes and Mark Mynheir, both skillful fiction writers, and good friends. (Creston's on your left, Mark on right.) 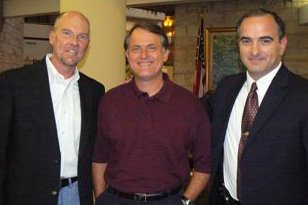 Creston wrote an intriguing book called Nobody, and Mark, a veteran homicide detective, has a new release named The Void. If you ever meet Mark, ask him to tell you about the rogue circus elephant he and other cops had to take down. An amazing and entertaining story, and Mark tells it well. (I asked him to tell it to Alex and Brett Harris, who it was great to see, along with their mom Sono.)

Here are two of our favorite people, Rick and Francine Rivers. They are committed followers of Jesus, and a delight. (Nanci and I stayed in their home several years ago.) Frani may kill me for posting this photo, but when Tyndale House publishers bussed us to an author event at Epcot, it was raining, so we all got these rain panchos. I thought the Rivers were particularly adorable. (Okay, Rick was manly, but Frani was adorable.) 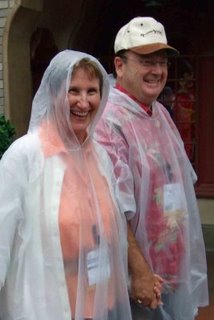 While most of you are familiar with Francine Rivers, her books are exceptionally powerful, well-written, and always Christ-honoring. Redeeming Love is probably her best known, but my own favorite is The Atonement Child.

That same night at Epcot we ate in a Chinese restaurant and watched some amazing teen acrobats. At my table were Mark Mittelberg, Gary Chapman, Mark's wife Heidi, Gary's wife Karolyn, and Maria Eriksen, with Tyndale. 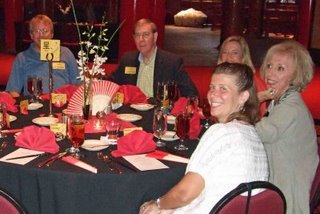 Meanwhile the rain stopped and we were ushered outside to watch powerful fireworks over the water. Here's one of my photos. 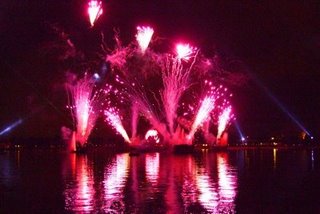 Ron DiCianni and I were grateful to win the Retailers' Choice award for our book Tell Me About Heaven. I'm holding the award but without Ron's beautiful paintings, the story wouldn't have been enough to win it. 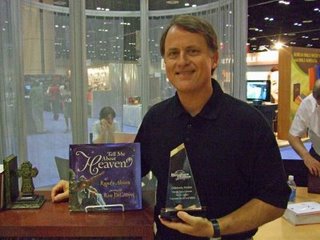 I didn't find out until I got home that Deception had also won the Retailers Choice award. Also, both Deception and Wait Until Then [now out of print] were finalists for the ECPA book awards. They didn't win, but it was an honor again to have finalists in two categories.

Many television and radio programs come to ICRS each year to do interviews. On this one we were discussing my Heaven books, as well as Wait Until Then [now out of print]. 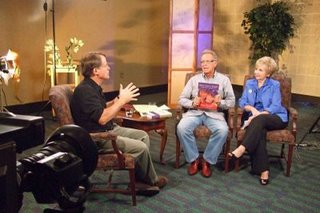 There are lots of book signings at ICRS. It's fun to walk along and see different friends I've made over the years, both the booksellers standing in line at book signings, and the authors. Here's Kirk Cameron, a good brother with a real heart for God. Kirk has spiritual substance to his life, which is always encouraging. 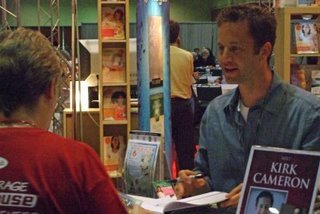 I did a booksigning on a new little book called TouchPoints of Heaven. We'll get more information on it when it releases next month, but it's a compact small format 200 page book that fits easily in a pocket. It's sort of a Heaven-book lite. (Which sounds a lot better than Heaven for Dummies, which it isn't.)

One lighthearted occasion was the twice daily march of the ducks in the Peabody Hotel. (If you've stayed at a Peabody you know about this.)

Here are Julee, Janet, Robin Jones Gunn, Ken and Tiffany, and in the background is Neta Jackson. I have never seen anyone more excited about marching ducks than Robin, and anyone less excited about them than Ken. It truly takes all kinds to make up the body of Christ. Aren't you glad? 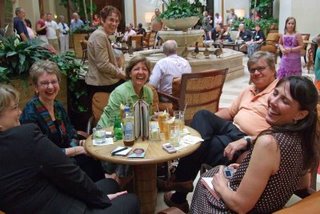 Okay, in terms of my highlight of who I got to spend time with at ICRS, it was John Perkins. At the ECPA book awards event, John was granted the lifetime achievement award. I can't think of anyone who deserves it more. 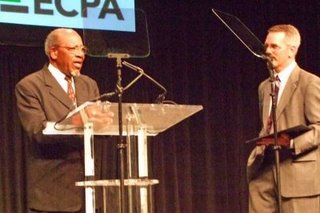 John Perkins is a sharecropper’s son who grew up poverty-stricken in Mississippi. Fleeing to California at 17 after his older brother’s murder at the hands of a town marshal, he vowed never to return. But after coming to Christ in 1960 he did return to Mendenhall, Mississippi to share the gospel of Christ.

John's leadership in civil rights demonstrations resulted in repeated harassment, beatings and imprisonment. He's the author of many good books, but his book Let Justice Roll Down, first released thirty years ago, tells about the shaping events of his life. Reading of the torture he experienced at the hands of Mississippi police, in the early 1970's, I wept through that book, as God spoke to me.

I have never been more deeply touched than in my first conversation with John at lunch in 1989 in Minnesota, at a writer's conference we were both speaking at. I saw in him a spirit of forgiveness and reconciliation that gave me great hope. John dropped out of school in third grade, but he is one of the wisest and sweetest men I have ever known. 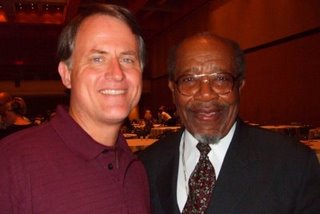 I'll never forget John taking me into a ministry thrift shop in Jackson, Mississippi in 1994, when I was researching my novel Dominion. John found an old hat he liked, on sale for 25 cents. The girl at the counter, seeing the founder of the ministry that owns all the thrift shops, said he didn't have to pay, but John insisted on it. Smiling broadly, he handed her the quarter and proudly put on his hat.

When I chose to be involved nine times in civil disobedience in 1989, it was men like John Perkins who reminded me how small the price was compared to what others have paid. Thank you, Dr. Perkins, for your faithfulness. Let me recommend John's ministry, one of those we support with our book royalties.

I'm grateful to God that ICRS and the Christian book industry is not just about empty celebrities, but also about those who are humble servants of Jesus.

For even the Son of Man did not come to be served, but to serve, and to give his life as a ransom for many. Mark 10:45 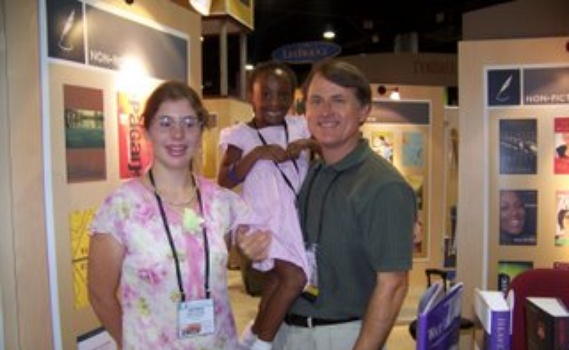 article July 24, 2007
Okay, back to ICRS, the booksellers’ convention earlier this month in Atlanta. Yesterday, someone sent me a picture from a book signing there. That’s Jasmine I’m holding. Precious.
Invest in Eternity