Abortion Reduction by The Freedom Of Choice Act? 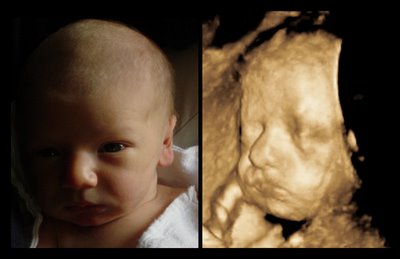 My blog on Barack Obama's proabortion stance, and the fact that various evangelical Christians are supporting and campaigning for him, has been getting lots of comments, some of them heated.

At the end of this current blog I've included a video of Obama speaking at a Planned Parenthood gathering. But first I want to build up to it. And just to remind us that we are talking about real human beings, I'll throw in some intrauterine photography and ultrasounds along the way. This first one is a born child and that same child months earlier in the womb. Note that the born child is exactly the same human being, just a little older, as the child in the womb. Exactly in the same way that a toddler is the same as an infant, a child as a toddler, a teenager as a child, an adult as a teenager. Age and size and location have no effect on human value and should have no effect on human rights.

In what I've been hearing and reading, there seems to be some confusion about what a president does that makes his position on abortion matter. He can’t pass laws; the legislative branch does that. He can sign bills or veto them, but that's it. He can’t interpret laws and determine legal precedents; the judicial branch does that.

So what does the president do that matters? He appoints judges. Lots of federal judges. And in this term of office, almost certainly one or two, possibly three Supreme Court justices. And what will these judges do? They will determine whether to review cases that call into question the legality of abortion established through Roe v. Wade. And the judges will decide according to their beliefs about the constitutionality of abortion. 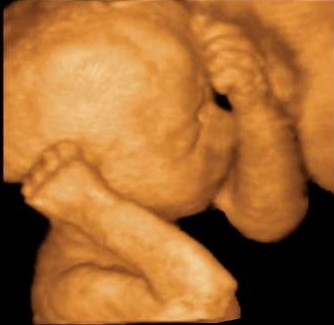 Now, my question to those prolife Christians who claim there will ultimately be fewer abortions if Obama is elected than if McCain is elected is this: what do you know that those most dedicated to defending abortion rights AND those most committed to fighting abortion do not know?

Why are all of us who haven't just casually said "I'm prolife" but have been dedicated to the prolife cause for decades, and yes I am one of them, saying that we should vote for a prolife presidential candidate and not the most proabortion candidate in our history? Why is every proabortion group, without exception, campaigning fiercely for Barack Obama? Is it possible that all of us who have given our lives to the abortion issue, both for it AND against it, know something you don't know?

Planned Parenthood knows. You'll see it in the video at the end, and the wording of the question to Obama about appointing judges.

In that earlier blog, I linked to an interview with my friend and brother Don Miller, about why he supports Barack Obama. If you haven't read that interview, you probably should before you read the following response to it, written by Douglas Johnson, legislative director of National Right to Life.

Douglas gave us his permission to cite in its entirety his response, which he posted as a comment on the interview website. Take it away, Mr. Johnson:

In this interview, Mr. Miller said, "He [Obama] is also standing up to his own party on the [abortion] issue and moving the party forward to elevate the issue of the sanctity of life within the Democratic Party. . . . I support Obama's plan to make actual headway on this issue."

I suppose these are references to Obama's very recent (post-nomination) talk about promoting "abortion reduction." But anyone who has been paying attention knows that this is nothing more than a short-term public relations "messaging" strategy, cooked up at liberal think tanks, especially Third Way, where veteran pro-abortion activists specialize in developing strategies to help hard-core pro-abortion politicians camouflage their positions.

The problem is that the real Barack Obama has a long and consistent record, and he is firmly committed to an agenda of policies that, if implemented, would greatly increase the numbers of abortions performed.

Here is an example how the real Obama has been "moving the party forward to elevate the issue of the sanctity of life. . ." On July 17, 2007, Obama stood in front of the Planned Parenthood Action Fund, the lobbying-political arm of the nation's largest abortion provider, and pledged, "The first thing I'd do as president is sign the Freedom of Choice Act. That's the first thing that I'd do."

Obama is a cosponsor of this so-called "Freedom of Choice Act" (FOCA) (S. 1173). It is a bill that would invalidate virtually every federal and state limitation on abortion, including all parental notification and consent laws, waiting periods, and limitations on public funding of abortion. Or, as the National Organization for Women put it, it would "sweep away hundreds of anti-abortion laws [and] policies." These laws in the aggregate have saved—are saving—countless lives.

Cardinal Justin Rigali, in a September 19, 2008, letter to members of Congress, explained with great clarity the sweeping power of the language contained in the FOCA:

"First it [the FOCA] creates a 'fundamental right' to abortion throughout the nine months of pregnancy, including a right to abort a fully developed child in the final weeks for undefined 'health' reasons. No government body at any level would be able to 'deny or interfere with' this newly created federal right. Second, it forbids government at all levels to 'discriminate' against the exercise of this right 'in the regulation or provision of benefits, facilities, services, or information.' For the first time, abortion on demand would be a national entitlement that government must condone and promote in all public programs affecting pregnant women." 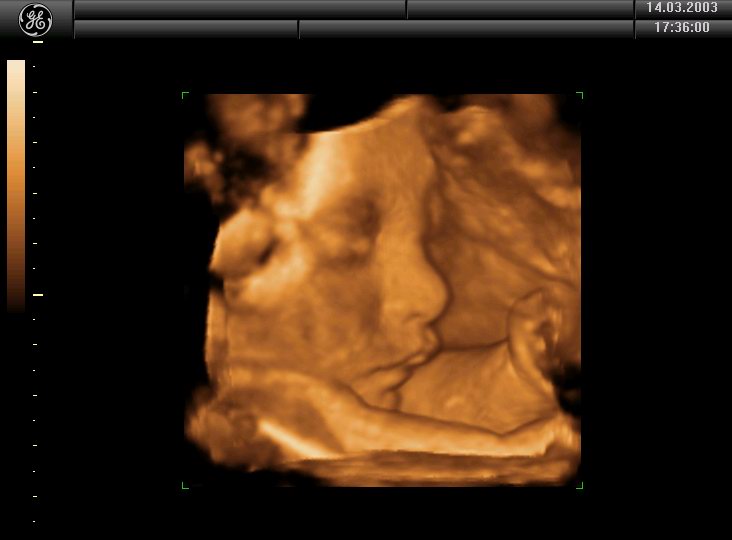 But, you need not take his word for it, or mine. Read what Planned Parenthood said about the FOCA, here. Obama also advocates repeal of the Hyde Amendment, the law that since 1976 has blocked almost all federal funding of abortion. This has been one of the most successful "abortion reduction" policies ever adopted. By even the most conservative estimate, there are more than one million Americans alive today because of the Hyde Amendment—some of them are probably turning out for the Obama campaign's "Faith, Family, Values Tour" meetings.

Even the Alan Guttmacher Institute (linked to Planned Parenthood) and NARAL admit that the Hyde Amendment (and the similar policies adopted by many states) have resulted in many, many babies being born who otherwise would have been aborted—indeed, the pro-abortion groups periodically put out papers complaining about this effect. Obama has also pledged to make abortion coverage part of his proposed national health insurance plan. 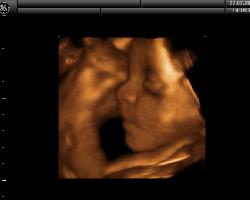 In this connection, it is important to understand that the Hyde Amendment must be renewed every year, because it is a "limitation amendment" on the annual Health and Human Services appropriations bill. During some years, the Hyde Amendment was preserved only because Republican presidents threatened to veto, or did veto, HHS funding bills that did not contain the language to continue the ban. But renewal of the Hyde Amendment would be difficult if a president insisted that any funding bill that contained it would be face a veto. 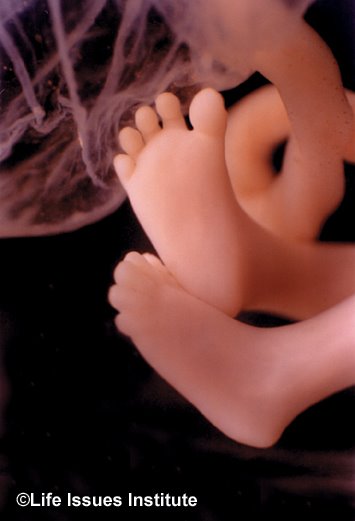 Mr. Miller refers in passing to a "Human Life Amendment" to the Constitution. It should be noted that the Constitution does not give a president any formal role whatever in the constitutional amendment process. (An amendment requires a two-thirds vote in each house of Congress, and ratification by at least 38 state legislatures, but not the president's signature.) With respect to regular bills, however, such as the "Freedom of Choice Act," the president's hand holds great power: to veto the bill—thereby protecting hundreds of pro-life laws and saving countless human lives, which is what a President John McCain would do if the "Freedom of Choice Act" reaches his desk—or to sign, as Obama has pledged to do.

Let me close with just one more example of how Obama would "make actual headway on this issue." Across the nation, crisis pregnancy centers (CPCs) provide all manner of assistance to women who are experiencing crisis pregnancies, and they save the lives of many children. Late last year, RHrealitycheck.org, a prominent pro-abortion advocacy website, submitted in writing the following question to the Obama campaign (as part of a candidate questionnaire): "Does Sen. Obama support continuing federal funding for crisis pregnancy centers?"

The Obama campaign response was short, but it speaks volumes: "No."

Okay, this is Randy again. Let me remind you that when I first heard him speak I wanted to vote for Obama. I have no hatred or disdain for him. I think he's likable, sharp, and has some good ideas. What I am feeling is profound sadness that he would sacrifice children on the altar of choice. And, yes, I admit to being grieved that many Christians are following him, as if the legalized killing of children created in God's image were just one more secondary political issue (some issues, including slavery and Jew-killing and child-killing, are bigger than that). I totally understand disenchantment with the Republican party; what I don't understand is why innocent children deserve to be punished by your vote.

Some have suggested these claims about Barack Obama aren't accurate. In case you're wondering whether Obama really promised at a Planned Parenthood gathering that he would sign the Freedom of Choice Act, check out the video below, or see it at http://www.youtube.com/watch?v=pf0XIRZSTt8. And please note the reference in the question to the nomination of supreme court justices, which both the prochoice and prolife advocates know to be the most important role of a president when it comes to abortions in this country. Note also the emphatic promise as he locks arms with the largest abortion provider in human history: "On this fundamental issue I will not yield and Planned Parenthood will not yield." (You heard it straight from Obama, so don't be surprised if he keeps his promise.)

"Do this so that innocent blood will not be shed in your land, which the LORD your God is giving you as your inheritance, and so that you will not be guilty of bloodshed." Deuteronomy 19:10

"You must purge from Israel the guilt of shedding innocent blood, so that it may go well with you." Deuteronomy 19:13

Not Cool: Obama's Pro-abortion Stance, and Christians Enabling Him

article October 16, 2008
I knew from the first time I heard him speak that Obama was cool. And if the candidate I supported, for reasons of substance, also happened to be cool, that would be a nice plus. Then the sad day came. I checked out Obama's actual position on abortion and I was demoralized.
Invest in Eternity