While on a recent family vacation I pulled out an advance DVD of the first episodes of Phil Vischer’s “What’s in the Bible” (whatsinthebible.com). I asked my five-year-old grandson Matthew Franklin if he wanted to watch something by the guy who created VeggieTales. Of course he did. So we watched it together, and watched it again the next day and the next, bonus features and all, until the day we had to leave. Matthew is now a devoted fan of Buck Denver and the other characters who are part of this new series which I believe has great potential.

I was impressed with the depth of biblical background and commentary on God’s great drama of redemption. Yet it’s so engaging to children and adults (namely me) that it remained fun and entertaining throughout. My grandson Matt retained a great deal of the material, bringing it up days later. What a remarkable combination of entertainment and biblical substance. I envision parents learning God’s Word right alongside their children, leading to spiritually significant conversations, and heightened interest in Bible study, something we desperately need. I applaud Phil Vischer’s efforts, and eagerly look forward to watching more of “What’s in the Bible” with my grandchildren…and when they’re not available, maybe by myself!

Check out the theme song from the video:


(Click here if you're unable to view the video.)

I was asked to endorse this project and was glad to do so. When I sent him my endorsement, Phil Vischer, the creator of "What's in the Bible", wrote me back, "We're headed into uncharted waters here with this type of project, both because it isn't the sort of narrative storytelling that kids are used to, and also because we can't (and won't) shy away from the tricky issues of the Bible that most kids products completely ignore."

DVDs 1 and 2, "In the Beginning" and "Let My People Go," are now available at your local Christian bookstore, or online at Christianbook.com. 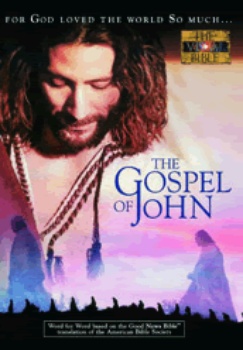 I Can Do Nothing on My Own: An Excerpt from The Gospel of John Movie

The Gospel of John is one of my favorite movies on the life and words of Jesus. Most movies draw predominantly from Matthew, Mark and Luke, while this one comes across differently because of the unique content of John’s Gospel.
Invest in Eternity