In honor of the Courageous movie being released in theaters, this weekend we're giving away six signed copies of the #1 CBA bestselling Courageous novel, which includes photos from the movie. Will you be going to see the movie this weekend? If so, please leave a comment below on this post and let us know who is joining you! Our staff (along with our spouses) will be going together along with Randy and Nanci to see the movie this Saturday. We’ll be sharing some pictures and thoughts on the EPM Facebook page.

Check out the opening scene from the movie:

To enter the novel giveaway, please fill out the form below by 9 p.m. PT (12 a.m. ET) on Sunday, October 2. We'll announce the winners in a blog post on Monday, October 3.

This weekend EPM is also offering free shipping on your entire order from our online store when you purchase at least one Courageous novel (EPM price $8.84, retail $14.99) or The Resolution for Men book (EPM price $8.84, retail $14.99). Enter the promotion code openingweekend during checkout to receive free shipping. Offer good through Monday, October 3.

Excited to see the movie, 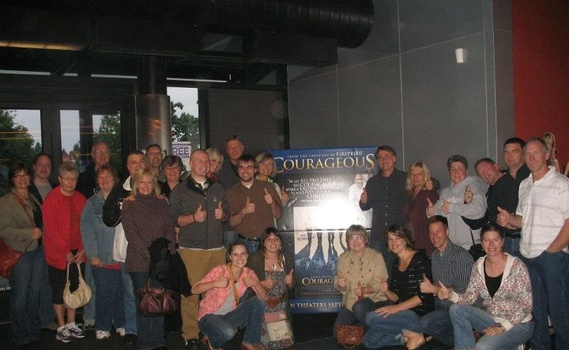 Winners of the Courageous Novel Giveaway

article October 3, 2011
Thanks to everyone who entered the Courageous novel giveaway.

article September 12, 2011
Last year I said yes to writing a novel based on the screenplay of the new movie Courageous, which is being released in theaters on September 30. The movie was done by the Kendrick brothers, Stephen and Alex, who produced Facing the Giants and Fireproof. As Fireproof centered on fire fighters and marriage, Courageous centers on police officers and fatherhood and, not surprisingly, COURAGE for men in their homes and personal lives.
Invest in Eternity