My Friend Greg Coffey, One of the First Faces I’ll Look for in Heaven 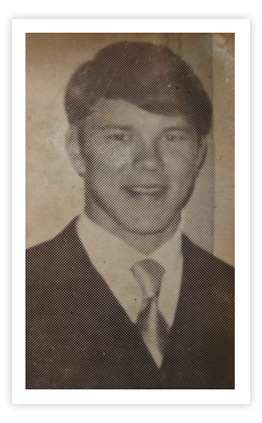 In The Goodness of God, I tell the story about my high school friend Greg Coffey, who died in a horrible accident in 1971, shortly after he and I both became Christ-followers. Though Greg was two years ahead of me in school, we were in a Spanish class together and got to know each other. He came to Christ his senior year, seven months after I did as a sophomore. Greg and I were both utterly transformed, and we enjoyed radical “first love” discussions of what it meant to follow Jesus. Our whole lives were before us and we dreamed great dreams of serving our King.

Not long ago, my friend Jim Swanson (now a Hebrew scholar, author of various reference works and editor of the much-heralded KJV401) wrote to say he had just found out that I had known Greg Coffey. Jim gave me a fresh perspective on Greg, who Jim knew before either of them were believers.

What I love most about Jim’s letter is the testimony to what Scripture says, something that we sometimes underestimate: the sheer transforming power of a trust in Jesus Christ as Savior. As Paul put it, “Therefore, if anyone is in Christ, he is a new creation. The old has passed away; behold, the new has come” (2 Corinthians 5:17).

Jim writes, “Greg Coffey was my enemy when he went to Gresham High School—he was a bully, and not a pleasant person to be around. Of course you know that class split off into Barlow, and I never saw him again. That is until I was in the music section of Mount Hood CC [our local community college] and ran into him. I was genuinely stunned at how he had changed. To me he was a total jerk before, but now he was a decent guy. As a non-Christian I had no thought of needing to forgive Greg for time in high school. But when I saw him again, whatever I had against him just melted away.”

Jim continues, “Greg hung out with some pretty tough kids in high school; I bet that senior year was a real trip for all his old friends when they saw the change! When he died, I was no Christian but I went to his funeral and was impressed with the views and testimonials from his Christian buddies.”

I was one of those buddies who shared at Greg’s packed funeral. Our beloved pastor of Powell Valley Covenant Church, Marden Wickman, shared from Hebrews 11, “Though being dead, yet he still speaks…” 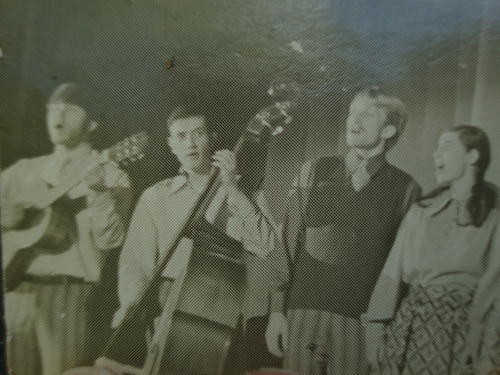 Going back to his story, after Greg graduated from Barlow High School in 1970, he and his girlfriend Sherel Trenholm, also sold out to Christ, went to Canada to attend Briercrest College. While he was home on Christmas break we spent a lot of time together in the Word. Greg had kind of a Keith Green persona and intensity. He meant business with Christ, and because I did too I was drawn to him, two young believers feeding each other books and writing letters to each other when he was in Canada. (In the photo, Greg is on the far left with the guitar, performing with “Plus One” from Mt. Hood Community College in 1970.)

Then it was three months later, during spring break, that Greg had his horrible accident. Smart, athletic, on fire for Christ, and with an incredibly promising future, Greg was swinging on a big tree branch, over a fence. The branch broke, and he was impaled upon a metal fence post.

The day of his accident, I spent the night in the hallway outside the downtown Gresham hospital emergency room, sitting on the floor except when I’d go back out to the waiting room and pray with others, including his precious Sherel, who Nanci and I loved deeply. Sometimes the nurses would kindly tell me how he was doing. I begged the Lord to heal Greg and was absolutely certain he would. No doubts.

When a nurse took pity on me and let me into ICU, I saw my friend fighting for his life. I was still convinced it could not be God’s will for him to die. He was growing closer to God every day, studying God’s Word, sharing his faith. Greg had a bright future in God’s service. Greg and Sherel were shining lights. Surely God wanted them to be married and serve Him together wholeheartedly. I knew God would heal him. I couldn’t have been more certain; I’ve never had greater faith.

Greg was transferred to Providence Hospital in Portland. We had a spring break Powell Valley Covenant Church retreat at Grace Haven Lodge at Tolovana, where a year earlier Greg had come to faith in Christ. Nanci and I really needed to be there, and I stayed in touch by phone about Greg’s condition. Then one night at the retreat, I got the call informing me that Greg had died.

A vivid memory in my mind’s eye is when I was outside the ICU on Tuesday at Providence. The gathered family members were told that Greg was fighting for his life. Greg had whispered to me through dry, cracked lips that he wasn’t going to make it, but that he was going home. Like you, Randy, I insisted that the Lord was going to heal him, that He had work for us to do together. I kissed him, said, “I love you.”  He said, “I love you.”

My folks had rushed back home and arrived just before the doctor came out and announced to us that Greg was gone.  It was so surreal—my dad enveloped me in his arms, and me and my future melted into the Lord’s mercy and grace. (That weekend was supposed to have been our engagement weekend.)

Then from across the waiting room lobby one family member screamed at the top of her lungs, “I hate you, God!” There it was—the two choices—curse God or run to Him. Since that time, in grace upon grace, in my life conversation with my Lord come the words first recorded by our brother John (in John 6:68-69), when Simon Peter responded to Jesus’s question, “Do you also want to depart from me?”  He answered, “My Adonai, to whom shall we go?  You have words of eternal life and we have believed and come to know that You are the Holy One of God.”

Like so many others, I was devastated when I heard Greg had died, learning my first lesson that God is not captive either to my will or my faith. I had all the faith in the world God would heal Greg, but God had different plans, and I’ve never forgotten that lesson. Now I pray with my faith in God instead of my faith in my faith. I tell God what I want to happen, what seems best to me, and I ask Him for it. But I trust God not to do everything I think is best, but to do everything He knows is best.

That night, the Holy Spirit descended on the retreat center and numbers of teenagers came to faith in Christ. I had the privilege of leading seven kids to the Lord. Which of those is walking with Jesus today, I don’t know. But I do know that one of the first faces I will look for in Heaven is Greg’s. I always think of him as one of those people for whom conversion to Christ was what it’s supposed to be—utterly transforming, a testimony to the grace and power of God.

My old buddy Larry Gadbaugh was also a friend of Greg’s. He wrote this to Sherel and me:

I remember God using Greg’s death awakening so many people to Christ’s sacrifice for our sins, the hope of eternal life through faith in Christ.  Sherel’s radiant faith, countenance, her example of grieving with confident hope through her tears, and continuing to point to Christ, were such strong witnesses throughout that time.

I remember that all of us seemed to be carried along as God was working from so many directions, to draw us further into the knowledge of Christ and His working in, among, through and around us.

I’ll close with a song Greg wrote, titled “Am I Worthy?”, that we sang at his memorial service. (Thanks to Larry, who was also a member of the Plus One singing group, for sharing the handwritten copy).

Am I Worthy by Greg Coffey 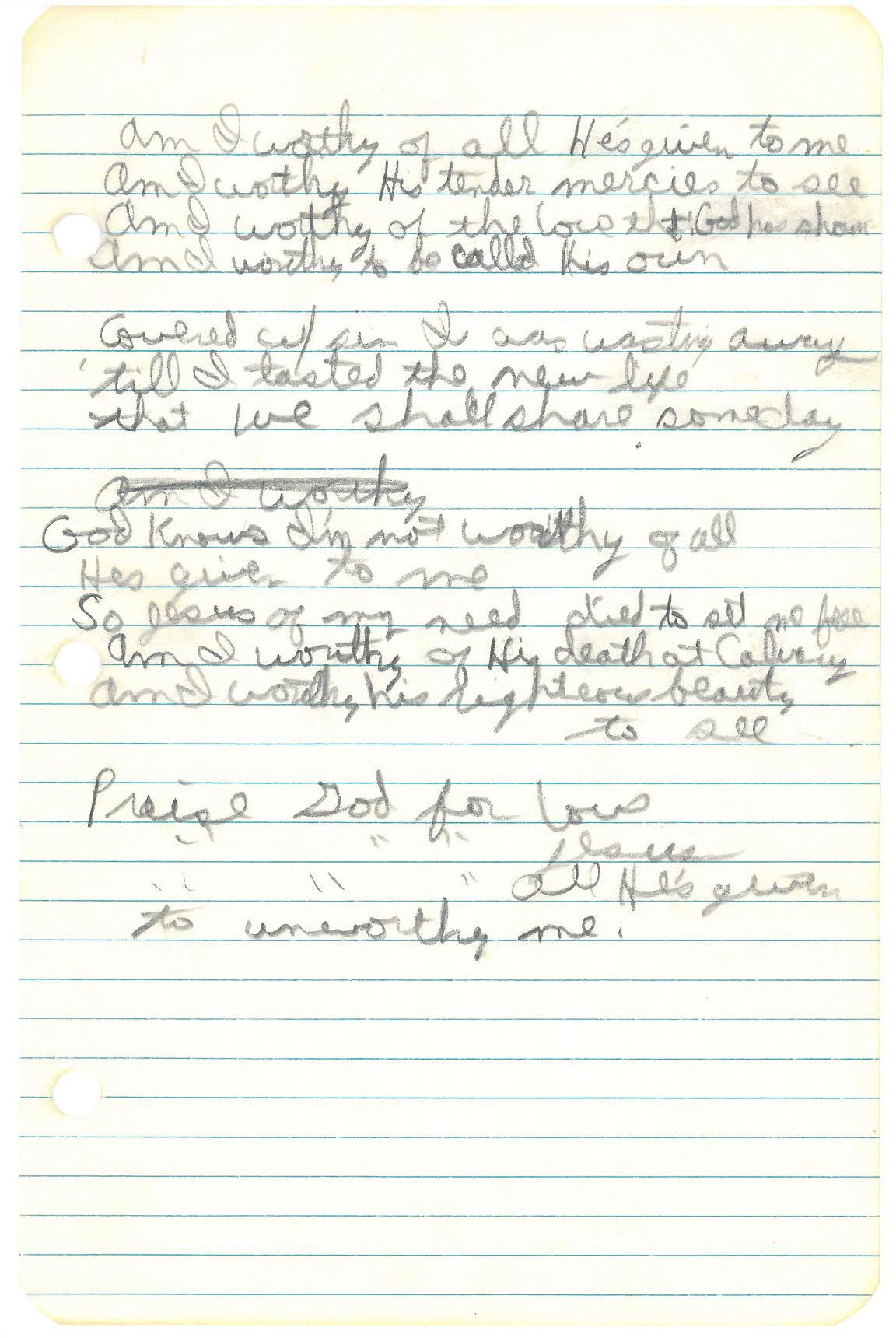 Am I worthy of all He’s given to me

Am I worthy His tender mercies to see

Am I worthy of the love that God has shown

Am I worthy to be called His own

Covered with sin I was wasting away

‘Till I tasted the new life that we shall share someday

So Jesus of my need died to set me free

Am I worthy of His death at Calvary

Am I worthy His righteous beauty to see

Praise God for all He’s given

Thanks for the great memories, King Jesus. And see you soon, Greg. 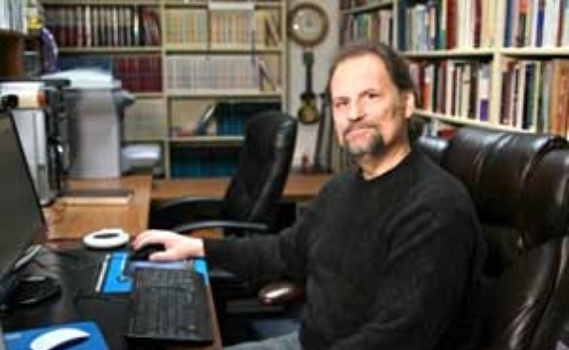 A Tribute to My Friend, John Kohlenberger

article October 7, 2015
On September 29, 2015 John R Kohlenberger III went home to be with Jesus, after a thirteen-year battle with cancer. John, a gifted scholar, wrote many biblical language reference works. 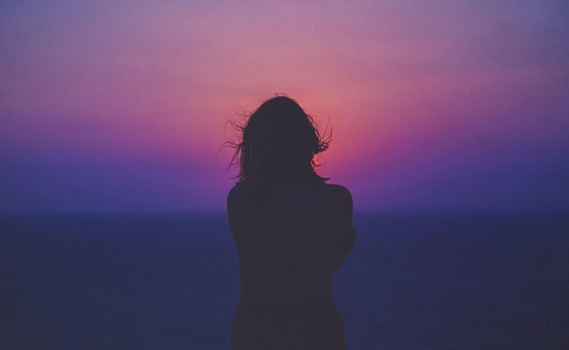 As a Single Person, Will I Be Second Class in Heaven?

article October 5, 2015
This question came from a reader: "As a middle aged, never-married, Christian single with no kids, life is lonely. ...How will I fare in Heaven when surrounded by mostly large families where people have their kids, grandkids, many friends, a spouse, etc., and I'm alone?" 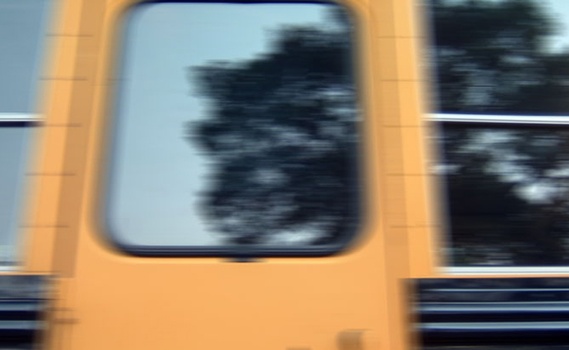 article October 5, 2012
When I was seventeen years old and had known Christ for less than two years, I experienced what I believe was a mir­acle.
Invest in Eternity