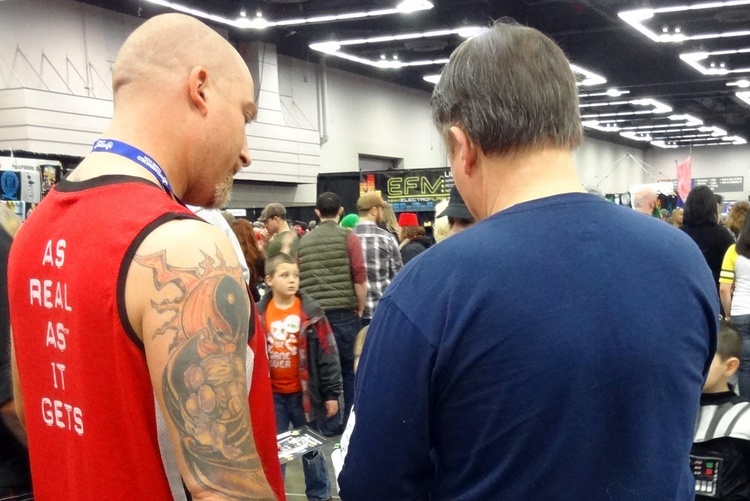 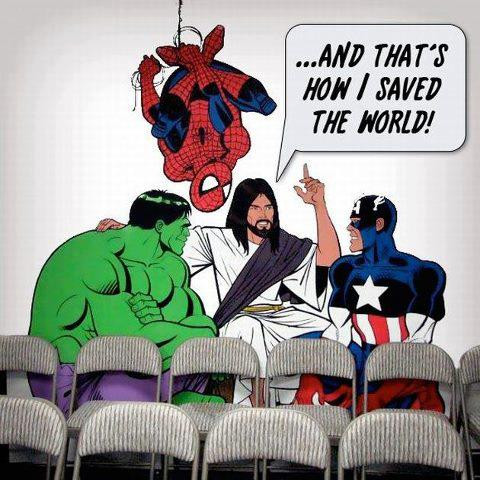 I had nine hours of exhausting but fun interaction Saturday at the Portland Wizard Comic Con, where EPM had a booth. We sold some Eternity graphic novels but gave away a lot more, and handed out Heaven and If God Is Good booklets.

Wonderful (former) EPM staffer Julia Stager was there Friday and Sunday, and we had some great volunteers—Amy, Erin and Dave. Thanks to all of them. (Be sure to read Julia’s great comments that follow mine; they’re better.) 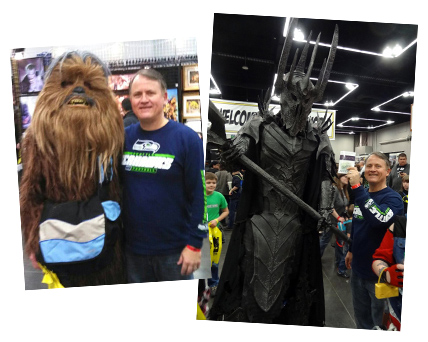 Throughout the weekend we met a lot of people and had some great conversations with unbelievers and believers. I wanted to get the Heaven booklet to the tall entity in the photo, but Sauron a.k.a. the Necromancer a.k.a. Lord of the Rings, did NOT seem spiritually open. I sensed a spirit of darkness. (My Seahawks shirt didn’t help, as he appears to be a Raiders fan.) I don’t want to be judgmental, and we all need the gospel, but the folks from Mordor have some pretty deep issues. Hoping for a changed heart, but I also suggested to Sauron that he give the orcs a lunch room, coffee breaks and at least pay them minimum wage. He stared at me but said nothing. If you have a fantasy prayer list, you might want to add him.

The weirdness of the Comic Con environment seems to actually work in favor of the gospel. I’ve found people to be more open to new ideas, including the gospel. It’s a place where Christ-followers are not singled out as weird, as we sometimes are in Portland. :) This is largely because so many OTHER weird people are there. So we fit right in. :)

Volunteer Dave McAllister took lots of photos, which you can see in this 2.5 minute slide show:

EPM Staffer Julia Stager shared some thoughtful reflections after being at our booth: 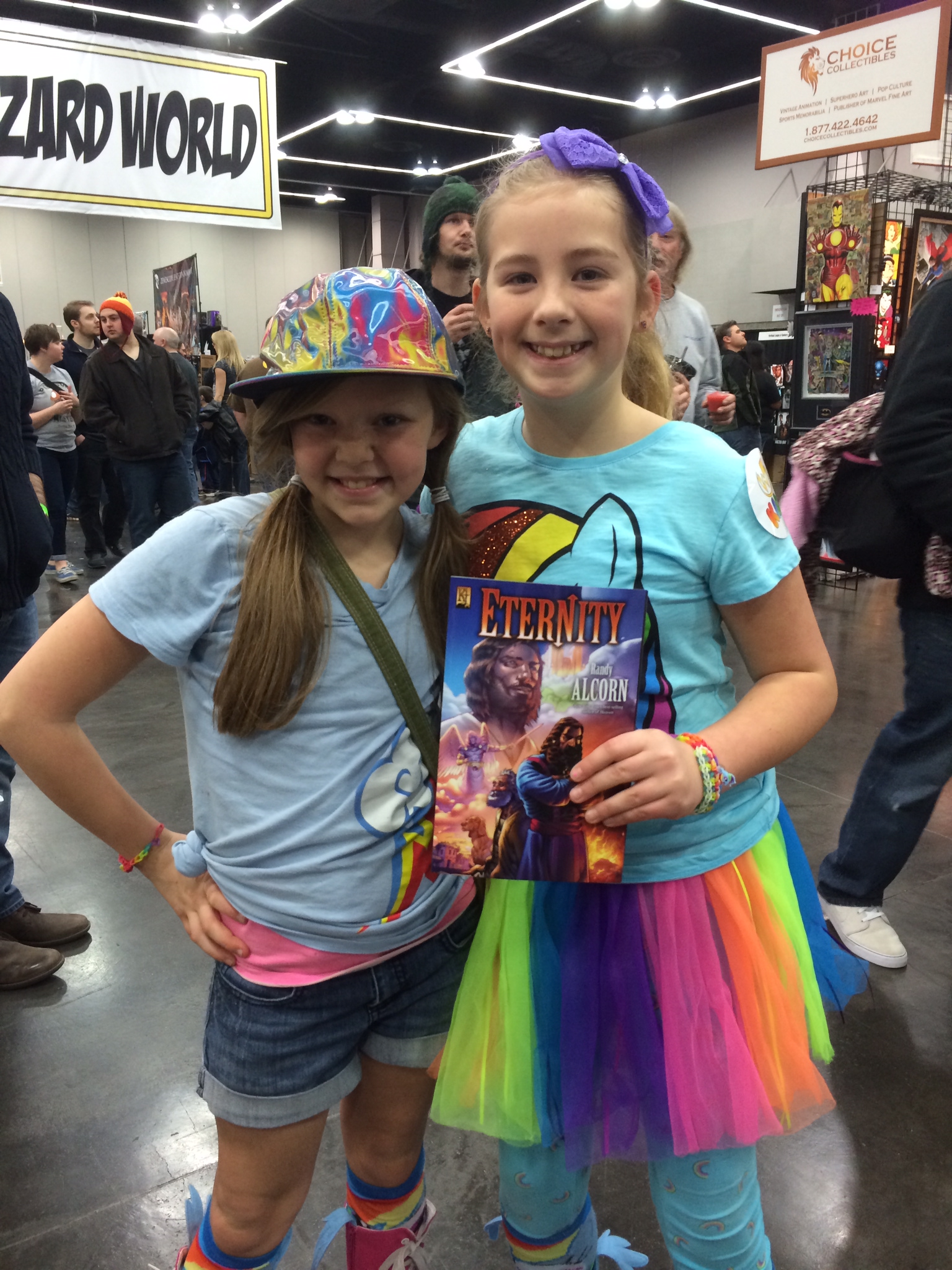 Being at Comic Con was a great experience. The people I interacted with were kind, welcoming, considerate and genuinely interested in having a good time and wanting others to enjoy the convention too. (Here are some darling girls who got a copy of Eternity!)

Although there was a lot of fun at comic con, it seemed like many of the people there were living without hope. It almost felt they were desperate to be a part of something bigger, part of a real adventure. It’s like there was a craving for something beyond this world to knock us out of our mundane routine of eating, sleeping and working. We’re wired to enjoy excitement, to participate in cosmic struggles between good and evil, and to long for our own life to make a difference.

The truth, of course, is that these are all supremely found in Christianity. What many of the participants were looking for in these stories can only truly be found in Christ. Every comic book series, TV show and movie comes to an end, but we’re invited to be a part of the eternal adventure story.

Jesus is the real-life God-man who defeated the powers of darkness and death and through whom the whole universe will be renewed. We’re each given the opportunity to play an integral role in this story of struggle, love and redemption, or to cut ourselves off from the story and become eternally inconsequential and less than a shadow.

After the show, I was left with a deep sense of thankfulness that I know the gospel and have a role of eternal significance in the struggle against evil. And that this story isn’t just for me; it’s for everyone who wants to join it.

Julia is right—people long for stories that give their lives meaning. You couldn’t make up a better story than the true story of God’s unfolding drama of redemption. I was an avid reader of comics as a kid, long before I first heard the gospel as a teenager. When I read the gospels they had the ring of truth. I knew Jesus was the real deal, the One I had longed for. He did for me what no other hero could ever do.

Of course He’s far more than a “superhero,” but you can’t find a greater hero than Jesus. The climax will be the return of the King and the establishing of His kingdom. With the Lord we love and with the friends we cherish, the King’s followers will embark together on the ultimate adventure, in a spectacular new universe awaiting our exploration and dominion. What a privilege to share this exciting and life-changing message with others!

Thanks so much to those who joined us in this unusual ministry through your prayers. Please continue to pray with us that the seeds that were planted would bear much fruit and that many would come to know and trust in Christ.

By the way, if you’re interested in a great children’s Bible that’s a big graphic novel, see The Action Bible, which I gave to my grandkids and have often read to them.

And for quality comics with a biblical message see Kingstone Comics, the publisher of Eternity and my upcoming graphic novel on the Apostle Paul. Kingstone is a high quality company and its leaders have great integrity and vision. Check them out! 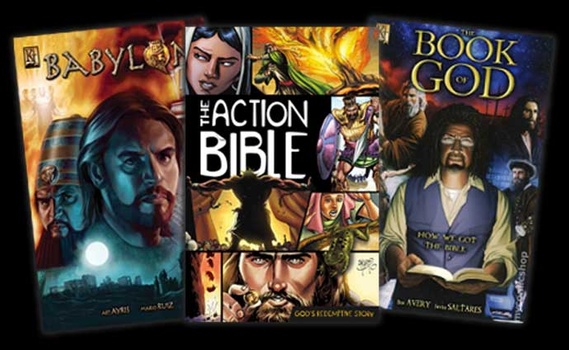 article July 12, 2013
I’ve found there’s a common stereotype among believers that a graphic novel is inherently immoral, theologically unsound, and undermines rather than uplifts God’s Word, Christ, and the gospel.
Invest in Eternity