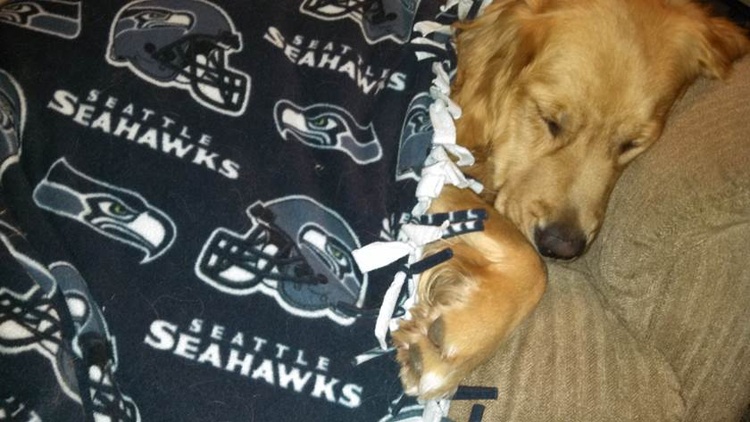 If every player on one team were an atheist and everyone on the other loved Jesus, I would never assume that the team with the believers would win! :)

It’s funny, because that should be a given, but I think many people actually feel the opposite. And others assume that I think that way. For instance, last week I posted a video on Facebook of some of the Seahawks players talking about Jesus, one that I highly recommend. Several comments came back like this: “Well, I guess the Broncos may as well stay home.” 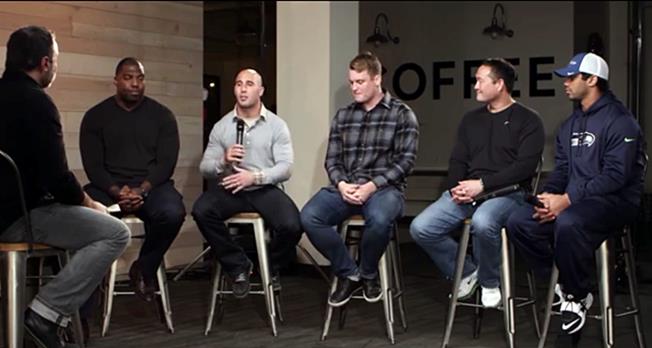 At first I didn’t understand, then I realized they assumed I was thinking the Seahawks would win because they have the favor of God! The truth is that just as every team has predominantly unbelievers (some well-behaved, some poorly), virtually every team also has believers, some stronger than others. I have no idea how many believers currently play for the Broncos. I have met and I like the guys in the video and in the photo who play for the Seahawks: Wilson, Okung, Maragos and Gresham. But I’ve never thought that a Christian will win a game or the Olympics or the presidency or anything else just because he knows God! That’s prosperity theology, and it’s not true to Scripture. (Left to right in the photo: Seahawks players Russell Okung, Chris Maragos, Clint Gresham, Assistant Coach Rocky Seto, and Russell Wilson, during an interview.) 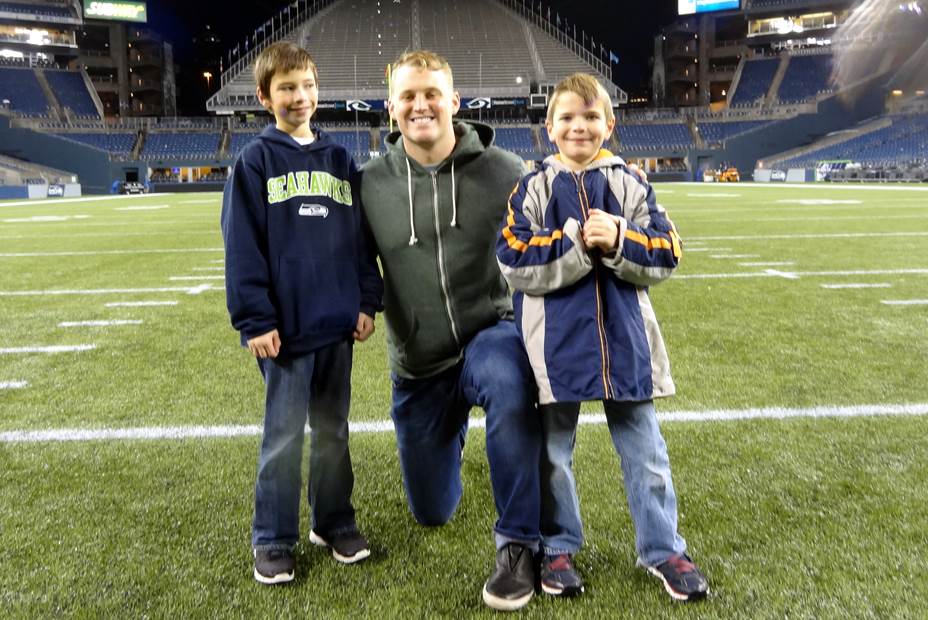 God values humility, not self-exaltation (which is why I didn’t appreciate one of the Seahawks interviews after the last game). The main reason I was grateful the Seahawks won the NFC championship was simple: we’ve been Seahawks fans since their first year, 1976. (Go Zorn and Largent!) Also, this fall I met the brothers in the photo, and I like them. Another reason was that going to the Super Bowl meant two weeks of focus on the team that would result in many people seeing that excellent evangelistic video. I applaud Clint Gresham (in the photo with our grandsons Jake and Ty after a game, on Century Link Field) and the other guys for putting that together. (See the story behind the video.)

But while I am definitely cheering for the Seahawks, and hoping for a win, the truth is I don’t think eternity will be much different regardless of who wins! But eternity will be affected by how God’s people—fans, coaches and players—represent Him, and the work of grace He does in their hearts, win or lose. I don’t mean that the sovereign God has no influence on outcomes, but simply that when it comes to many things, sports included, we have no way of knowing what He intends to accomplish regardless of which team wins.  “’For my thoughts are not your thoughts, neither are your ways my ways,’ declares the Lord. ‘For as the heavens are higher than the earth, so are my ways higher than your ways and my thoughts than your thoughts’” (Isaiah 55:8-9).

Truthfully, often the most Christ-like and impactful responses are not in the winning but the losing. Tim Tebow is out of the NFL, but how he responds and the life he lives now is just as important, even if it’s less visible. In any sports competition I always pray that believers on both teams will live faithfully and make Jesus known. The gospel is far more than words, yet it is in fact “good news,” and news involves words.

Jesus said, "Whoever acknowledges me before others, I will also acknowledge before my Father in heaven” (Matthew 10:32). That’s why I like the players who are upfront about their faith and are not afraid to say “I love Jesus,” not just “I thank God.” (Some professional athletes have told me no one cares if you mention God, but your stand becomes clear when you mention Jesus, which some don’t like; which is the way it’s always been.)

I would expect no Broncos fans (I really like Manning, by the way) to apologize for wanting their team to win. So in that spirit, knowing there are a gazillion more important things in the universe—and also that the comments give everyone a chance for rebuttal—I wholeheartedly proclaim, “GO HAWKS!” 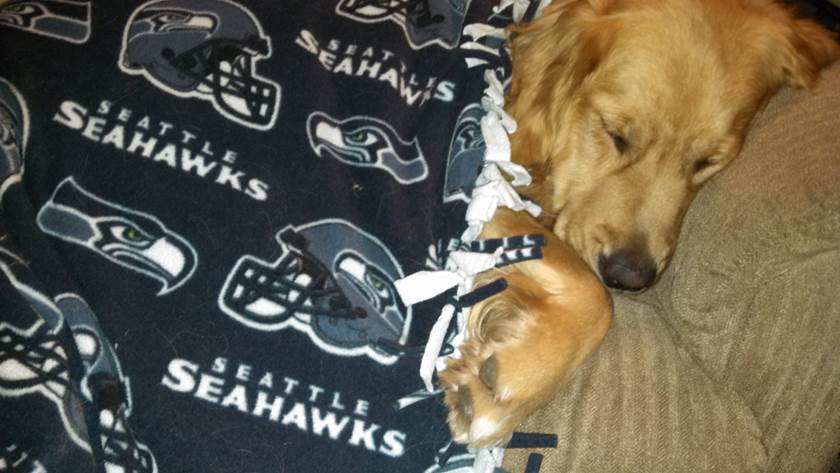 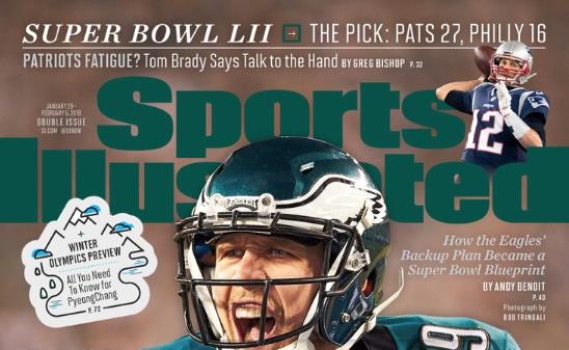 article January 31, 2018
I’m praying for quarterback Nick Foles, that he would be in the eye of the hurricane, experiencing the peace of Jesus. Nick turned 29 last week, so this is a lot of pressure on a young man, but he’s humble and grounded, and I know from interactions with him yesterday that God is giving him great peace. 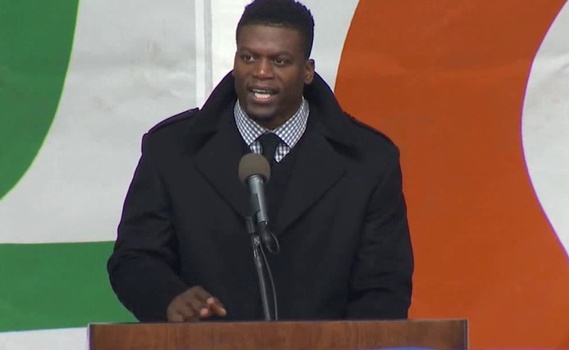 video February 1, 2017
The 44th annual March for Life took place last Friday, January 27 in Washington, D.C. One of this year’s speakers at the rally was Baltimore Ravens tight end Ben Watson. I love this brother and so appreciate his willingness to speak out on behalf of the unborn.
Invest in Eternity