Abba, Father: What Having God as My Heavenly Father Means to Me 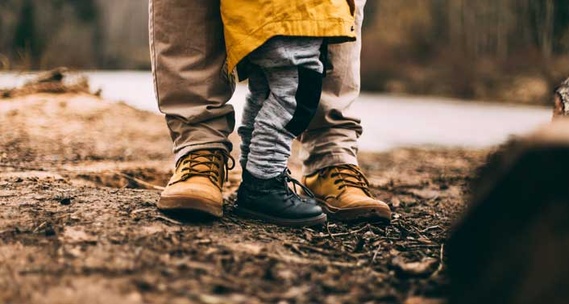 I grew up with a dad who slept at home, but generally wasn’t there for me or my brother. He was a good provider, and I was proud of his extraordinary physical strength, but he didn’t come to my games or any school activities. I never had the experience of playing catch or going camping or fishing with him. He was a skilled mechanic, but didn't take the time to teach me how to work with my hands. He was always off to work or when home, working on something else or reading the newspaper. Beyond telling me to do various chores, he rarely spoke to me and I had little access to him. While my mom was always there and approachable, it seemed my father wasn’t interested in me.

Everyone is different, but what happened to me was that my earthly father’s absence made me all the more appreciative when I entered into a relationship with Jesus, and thereby into a relationship with my Father in Heaven. This Father loved me unconditionally, and despite His high expectations, He never told me to do anything that He didn’t give me the strength to do, and was quick to forgive me when I failed, which I often did.

I found God the Father 100% trustworthy, an infinitely powerful provider who created the universe itself, not only for His glory but also for my good, as His son. I believed Him to be, and do now more than ever, personally and genuinely interested in my life. He wired me a certain way, and when I use my gifts and abilities to serve Him, I am His apprentice, having learned at His feet, under His guidance. It is an honor and joy when I show some resemblance to my Father in Heaven. He means everything to me.

I base these concepts not on wishful thinking, but on God’s revealed Word, and its blood-bought promises. I am a child of God, born into His family: “Yet to all who did receive Him, to those who believed in His name, He gave the right to become children of God—children born not of natural descent, nor of human decision or a husband’s will, but born of God” (John 1:12-13, NIV).

But as if being born into His family weren’t enough, Scripture says He also chose to adopt me: “You have received the Spirit of adoption as sons, by whom we cry, ‘Abba! Father!’” (Romans 8:15). He’s not a distant and unapproachable Father. I am delighted to call Him “Abba, Father.”

I always have access to Him, the King of the universe. His throne room is continuously available to me, His child, and He always has time for me: “Let us therefore come boldly unto the throne of grace, that we may obtain mercy and find grace to help in time of need” (Hebrews 4:16, KJV).

While my earthly father often seemed impossible to please, my heavenly Father seems eager to say to me, “Well done.” Not only is He willing to spend time with me, He’s also eager to do so, and went to incredible lengths that I might spend eternity living with Him in His place, with Him always there for me, and me always able to proudly serve under Him. It’s my privilege to worship Him, and call Him my Father.

I later had the privilege of leading my dad to Jesus when he was 84 years old. For the final five years of his life, when he was failing and needed my help, at last we became close. (Read the full story.) I can’t wait to reunite with my earthly father in Heaven, transformed into the image of our mutual Father in Heaven.

For more on fatherhood, see Randy's novel Courageous, as well as The Resolution for Men (by Stephen and Alex Kendrick, with Randy Alcorn as contributor).

Photo by Daiga Ellaby on Unsplash