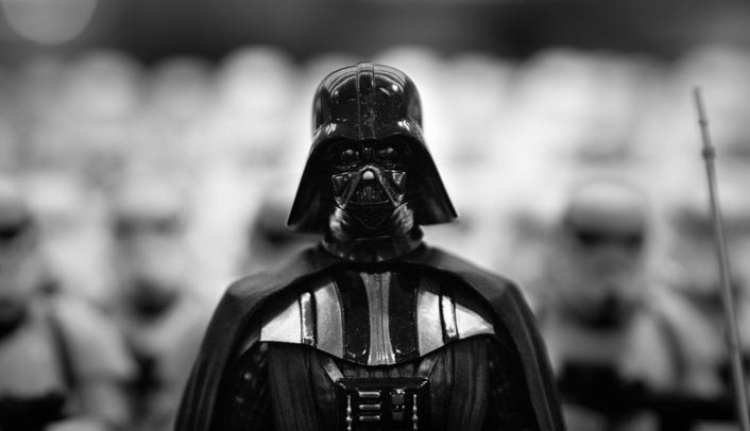 With the release of Episode VIII – The Last Jedi, I’ve been asked again about my views on Star Wars. I enjoy science fiction and I do like Star Wars, especially the original three movies. Nanci and I actually attended, in Portland, the first showing of the original Star Wars in late May 1977, over forty years ago (we started our church earlier that same month). The theater was less than half full. We were blown away by the quality, and by the time we brought friends back to see it the following week, the word had spread and lines to buy a ticket were almost out to the street. (Some of you remember!)

That said, it was obvious even then that Star Wars was fun to watch but a very poor place to get your theology! I am not a Star Wars naysayer, and it might seem self-evident that “these movies aren’t based on reality.” But I’ve found that while almost no one ends up believing that the particular aliens onscreen really exist, matters of worldview are much more subtly conveyed. So I encourage parents to talk with their children about this, since many of them don’t yet have the filters in place to screen out what’s false.

I can hear some people saying, “What are you even talking about? There’s no theology in Star Wars. These are just some fun movies.” Well, yes, they are fun movies, but if you think they don’t contain theology you are, no offense intended, naïve. Here’s just one example from the second of the original Star Wars movies, The Empire Strikes Back. Yoda is mentoring young Luke Skywalker in Star Wars theology:

“For my ally is the Force, and a powerful ally it is. Life breeds it, makes it grow. Its energy surrounds us and binds us. Luminous beings are we, not this crude matter. You must feel the force around you, here between you, me, the tree, the rock, everywhere, yes, even between land and ship.” 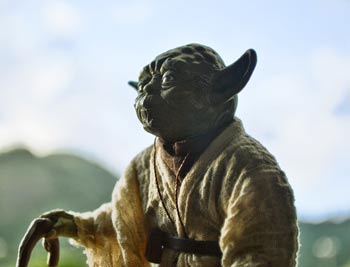 This is loaded with theology, most of it dead wrong. Where is God the Creator and Jesus the Redeemer in this worldview? Or when Yoda says of his coming death, “Soon will I rest, yes, forever sleep. Earned it I have,” how does this stand up against the biblical worldview of Heaven and Hell? Where is the grace of God offering deliverance from Hell only the basis of faith in Christ offered by His redemptive death on our behalf? Our eternal rest, which is conscious, is not granted on the basis of good works, as Yoda affirms: “Earned it I have.” Compare Yoda’s words with Ephesians 2:8–9 and Titus 3:5.

This errant theology is an opportunity to talk with our children and each other about biblical truth. But if this isn’t done, why shouldn’t we expect a child, especially one who watches the movies repeatedly, to absorb and to a degree, at least, to embrace this false theology?

If kids and parents can sit down, like we did with our daughters when they were young, and discuss the theological errors with “the Force,” that can be very good for them (and us). Everyone has a theology or worldview, of course, you do and I do and George Lucas does. His worldview just happens to have a bigger platform and more pervasive presence than most of ours!

The Dangers of Dualism

So what are the errors in the Star Wars theology and worldview I’m referring to? There are elements of Eastern mysticism and New Age, with sprinklings of pantheism, but the most fundamental and pervasive error is dualism (similar to the Persian religion of Zoroastrianism).

When we teach our kids about the world and the course of events, we need to make clear it is not fate, randomness, or nothingness which control these things, nor is it a whimsical pagan god with limited powers, duking it out with competing gods, and only time will tell who wins. There are not two equal opposite forces in the universe, and who will be victorious is not in doubt! The God of the Bible is utterly unique, transcendent, and personal. And this God, the one true God, is not portrayed in the Star Wars Saga (nor in most other movies of any sort being produced today).

Even among Christians, I sometimes see a sort of evangelical dualism that surfaces. But such thinking is dead wrong—yes, there is evil in the world, of course, and God is not an evil-doer. But the forces of evil are not “the dark side” of God. He has no dark side! God is the all-powerful Force for good, and demons and sinful people are finite and temporary forces for evil. But they are not part of the same force, nor is their ultimate power equal!

In John 9, the disciples wanted to attribute a man’s blindness to human sin, either his or his father’s. Jesus corrected them: “Neither this man nor his parents sinned, but this happened so that the work of God might be displayed in his life” (v.3). We sometimes back away from thinking God actually makes someone disabled. We attribute deformity and imperfection to human sin and to Satan, and there’s a half-truth in that, but only a half-truth (and all heresies are half-truths). God said to Moses, “Who gave man his mouth? Who makes him deaf or mute? Who gives him sight or makes him blind? Is it not I, the LORD?” (Exodus 4:11). Notice God doesn’t merely say “Who allows man to be deaf or mute or blind?” but “Who makes him that way?”

He Has No Opposite

Sometimes when I’ve spoken on this topic, I’ve given a little quiz and ask the audience, to say out loud the first thing that comes to their minds in answer to each of these questions. Please do the same right now, actually speak your answer:

Then I tell them, if you answered “evil” to one and “below” to two, you were correct. But if you answered “Satan” or the devil to number 3, you’re wrong. (Yet in my experience that’s exactly what most Christians answer.)

Here’s the truth, and it’s what breaks the back of all dualism, including Zoroastrianism and the Star Wars theology:

Satan is not the opposite of God. He is the opposite of Michael, the unfallen archangel. This is not a semantic trick—this is the truth. God has no opposite. To make a created being the opposite of the Creator results in many other heresies, not the least of which is thinking that Satan and God are battling to see who can pilot the ship, with the results in question. This is Star Wars theology, not the Bible. Who will win, the dark side or the light side of the force? Dualism is a heresy many Christians buy into without realizing it. We make Satan too big—and far worse, we make God too small.

Yes, Satan is called the “god of this world,” but this is set in an overall context with God being absolutely sovereign. Satan isn’t anywhere close to being all-powerful, omniscient, omnipresent, or anything else that God is. He is capable of great evil influence, but he is ultimately a dog on a leash. (That doesn’t mean God is responsible or accountable for Satan’s actions—indeed, God is accountable to no one.) 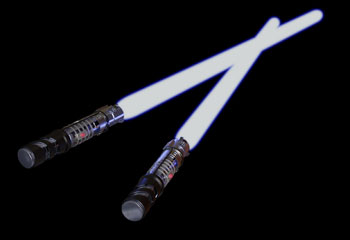 God says “I am the Lord, and there is no other. I form the light and create darkness. I bring prosperity and create disaster; I, the Lord, do all these things” (Isaiah 45:7). Our tendency is to try to be God’s PR people by absolving Him of all disasters. Sure, we can link them to the curse on the earth due to the sin of man, and yes demons do seek to bring disasters on us, but by distancing God from disasters (in a misguided attempt to defend his goodness—which needs no help from us) we end up with a deistic God who just lets the universe go wherever it will, run amok because of our sin. That kind of God isn’t vitally involved in our lives. He does not work all things together for good, like the true God of the Bible.

An Opportunity to Think Critically

If you would have told me in May 1977 that our children would be surrounded by Star Wars themes as they grew up, I would have doubted you. Had you said that children today would be, I would have thought you were crazy. But Star Wars has taken the world by storm, and while some children won’t watch the movies, the great majority will. Some things are better not to get exposed to, but some our kids will inevitably be exposed to, so it’s important for us to help them think through these issues properly.

Both the Christian worldview and the Star Wars worldview embrace the reality of the supernatural. But they do so in very different ways. The biggest question is, what will our children and grandchildren learn about God from the universe of Star Wars? Will what they learn be true to the Bible, or will it oppose what Scripture teaches?

In my opinion, if—but only if—you and your children know what the Bible says and have discernment, you can watch and read Star Wars, appreciate its portrayal of good doing battle against evil, and not buy into its dualistic belief systems. But we need to be careful with what our children feed their minds on, since their discernment isn’t yet well developed (and they live in a world of children and even many adults who never develop spiritual discernment).

Certainly we can’t expect our children to figure out all this on their own. If we as their parents don’t carefully point out to them the areas in which various stories they read or listen to are true and not true to Scripture, who will?

These articles are a few years old but still may be helpful for those wanting to understand some of the worldview and theological issues with the Star Wars movies:

A Worldview Critique of Star Wars

Why We Get Religious About ‘Star Wars’ 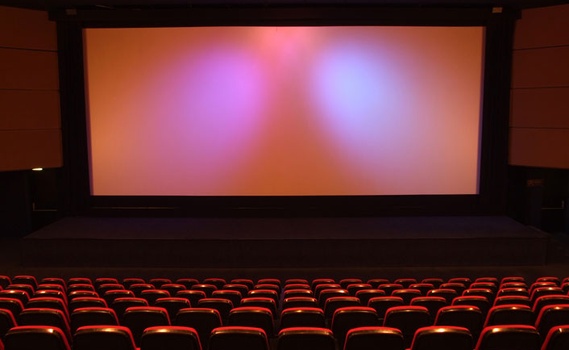 Evaluating Movies in Light of Scripture

article February 27, 2012
On my Facebook page, someone asked: "Randy, you often mention that you and Nanci have been to a movie. I'm curious about what kind and rating of movies you attend." 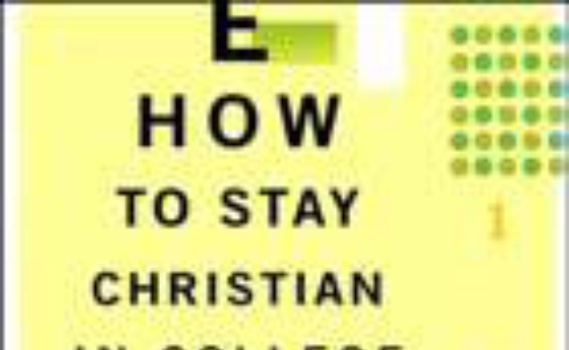 How Can I Prepare Myself to Have a Biblical Worldview in College?

How Can I Prepare Myself to Have a Biblical Worldview in College?