Running Toward the Unshakeable Kingdom

Every age has thought itself an age of crisis. The oldest bit of writing in the world is found in a Constantinople museum: “Alas, times are not what they used to be. Children no longer obey their parents. And everyone wants to write a book.”

But our age of crisis is the deepest that we’ve ever had. Everything that we hold dear is under question. Nothing is sacrosanct. Everything is being challenged.

I believe this is the greatest opportunity we’ve ever had as a Christian movement because men’s minds are fluid. They want something to tie to, something that is unshakeable.

I was in Russia in 1934, and I saw people building a civilization without God. And doing it enthusiastically. It hit me pretty hard. I needed reassurance, and so I went to my Bible one morning in Moscow, and these words arose out of the Scriptures: “Therefore let us be grateful for receiving a kingdom that cannot be shaken” (Hebrews 12:28-29 RSV).

The kingdom of communism is shakeable. They have to hold it together by force.

The kingdom of capitalism is shakeable. When President Dwight D. Eisenhower had a heart attack, the stock market plunged $4 billion. But the kingdom of God is not shakeable. It’s ultimate reality.

I lived on that verse, exultingly, that day. I came back the next day hungry for more. Another verse arose out of the Scriptures: “Jesus Christ is the same yesterday, today, and forever” (Hebrews 13:8). We’ve got an unchanging Person. He’s forcing change, modification upon us all. But he, himself, is unchanged and unchanging.

I came out of Russia with two things in my mind and heart: the unshakeable kingdom and the unchanging Person. Now they’ve come together. Coalesced. He is the kingdom embodied. Absolute goodness and ultimate authority looked out of his eyes. God not only redeems through Christ—he also rules through Christ. In him I find absolute authority and absolute love. 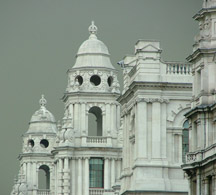 One English bishop said, “Stanley Jones seems to be obsessed with the kingdom of God.” And my reply inwardly was, Would God that I were! It would be a magnificent obsession. Jesus was obsessed with it.

He taught them to pray, “Our Father in heaven, hallowed be your name, your kingdom come, your will be done on earth as it is in heaven” (Matthew 6:9-10) Here is a complete totalitarianism. Demanding total obedience in the total life of all the earth. But, you say, that would be bondage.

Strangely enough, no. Here is a totalitarianism in which (if you totally obey it) you find total freedom. I don’t argue, I only testify that the more I belong to Jesus Christ and his kingdom, the more I belong to myself. Bound to him, I walk the earth free. Low at his feet, I stand straight before everything else.

When I became excited about this question of the kingdom of God, it did two things for my faith. First of all, it made my faith very personal. I was not following a system, nor a movement, an impersonality—I was following a Person. A divine Person. And so I had a personal relationship with a Person. It made my religion personal—but it also made my religion social. For I saw that embodied in this Person was an order. God’s order. It had relationships with everything that concerned man, nature, life, and destiny.

H. G. Wells, fumbling through history for the relevant, came across the conception of the kingdom of God. He was shocked. “Why,” he said, “here is the most absolutely challenging thing that was ever presented to the mind of man!” And the most relevant!

What happened to this conception of the kingdom of God? When Jesus spent 40 days with his disciples, after his resurrection, he talked to them about the kingdom of God. Get this straight, he was saying, for if you get this straight, all the ages will go straight with you. But if you get this wrong, all the ages will go wrong with you. Did they get it? It was too great for their small hearts. At the close they said, “Lord, at this time wilt Thou restore the kingdom of Israel?” His heart must have sunk within him. Here he was offering a world order, a new order, God’s order, the kingdom. And they said, “Do we get back our self-government?”

They didn’t reject it, they reduced it. And that’s what we’ve been doing ever since. We don’t reject the kingdom, but we reduce it and make it innocuous.

By the time the creeds were written in the 3rd century, what had happened to the conception of the kingdom of God? The Nicene Creed mentions it once, beyond the borders of this life, in heaven: “Thy kingdom is an everlasting kingdom.” The Apostle’s Creed and the Athenasian Creed don’t mention it. The three great historic creeds summing up Christian doctrine, mention once what Jesus mentioned a hundred times. Something had dropped out. A vital, vital thing had dropped out. A crippled Christianity went across Europe, leaving a crippled result. The kingdom of God was pressed into the inner recesses of the heart, as a mystical experience now, and then pushed out beyond the borders of this life, in heaven as a future kingdom. So there were vast areas of life left out, unredeemed: the economic, the social, the political. A vacuum was left in the soul of Western civilization.

God’s total answer for man’s total need is his kingdom. It’s God’s plan, God’s order, God’s promise, and God’s offer. I was speaking in a cathedral in Germany at the close of the second World War. The topic was the kingdom of God. On the front seat were very well-known Germans, Dr. Niemoller among them. As I spoke on the kingdom of God, they kept pounding on their benches with their fists. At the close they came up to me and said, “You seem to sense why we took to Naziism. Life for us was at loose ends. We needed something to bring all life into coherence and meaning and goal. And we turned to Naziism and it let us down in blood and ruin. But now we see that what we were looking for was the kingdom of God. And that’s where we missed it. And that’s why we were pounding the benches. We’d missed the way. We were looking for the kingdom of God and didn’t know it.”

Then my eyes were opened. I said, “Is that what men are thinking about? In this crisis? These revolts that are taking place? Are they really wanting the kingdom of God and don’t know it?”

The answer came back, yes. We can see they are revolting against injustices in the social order. But we can’t see what they’re revolting for. It’s hazy, undefined. But down deep, they are wanting the kingdom of God.

Now some people take the gradualism. Others take the apocalyptic. I can’t do that because they’re both integral parts of the account. And I need both. The gradualism gives me my immediate task. I can be the agent of the coming of that kingdom, now. And the apocalyptic gives me hope that the last word is going to be spoken by God—perhaps suddenly, when we least expect it. And that last word is going to be victory.

The world’s got a destiny. And that destiny is to be the scene of the coming of the kingdom of God. That gives me a total answer to man’s total need.

I have a friend who’s a management engineer. He takes sick businesses and puts them back on their feet again. He said, “You know, I found out that 95 percent of the difficulties in business are not in the business but in the people. They get snarled up with themselves, and others. And they project their snarls out into the situations and cooperation dies and the business turns sick. I can’t straighten out that business until I straighten out these people.”

So he sits till midnight talking to executives and heads of departments. And they say, “Yes, we’re snarled up. But how do you get unsnarled?”

He talks to them about God. They say, “Yes, but how do you find God?” And he explains, “By new birth. Conversion.” They sit till midnight talking about how to straighten out a business and run straight into the laws of the kingdom of God. They’re running straight into the Christian faith written into the nature of things, and inescapable.

I believe that Christianity is realism, not idealism. Something not imposed, but something exposed, out of the heart of reality. And I believe that the Christian way is the only way that will work.

We can go out no longer apologizing for an unworkable, idealistic way. But we can say to the world, Christ’s way is the only workable way there is.

We have an unshakeable kingdom, the kingdom of God. We have an unchanging Person, Jesus Christ. Then we’ve got the gospel. And it’s a total gospel, for man’s total need.

E. Stanley Jones was a Methodist evangelist, missionary to India, and founder of the Christian Ashram Movement. He died in January 1973. This article first appeared in Good News magazine in 1970. It’s condensed from an address he delivered at the Good News Convocation in Dallas that year.

The Kingdom Is Our Inheritance

video May 28, 2013
Randy Alcorn quotes Matthew 25:34 and stresses that our inheritance is not an afterthought, but is the plan from eternity past. This video clip was excerpted from Randy's Eternity 101 DVD class.

Are Efforts for Improving the World and Furthering the Kingdom of God Mutually Exclusive?

audio March 15, 2011
In this under 3 minute audio clip, Randy talks about the need for Christians to be salt and light in the world, to both restrain sin and reach people for Christ.

What's the Difference Between "Kingdom of God" and "Paradise"?

audio February 17, 2011
At a book signing at Lifeway Christian Bookstore in Beaverton, Randy Alcorn answered a variety of questions. In this clip, he answers the question, "What's the difference between 'Kingdom of God" and 'Paradise' in Scripture?"
Invest in Eternity