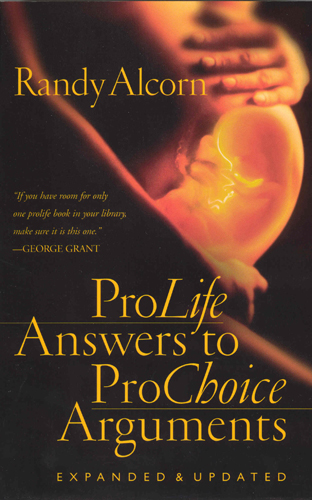 After reading my book ProLife Answers to ProChoice Arguments, someone sent me an editorial from Spectrum, the student newspaper of the University of New York at Buffalo. It’s written by student Michelle Goldberg. I’ve had to delete some of the more profane language, but you’ll get the drift. It’s a good reminder of the depth of the evil one’s deception in this arena. Pray for Michelle and many like her.

“Abortion on Demand and Without Apology.” Of all the catchy slogans of the prochoice movement, this simple yet elegant bumper sticker sums up my position the best.

If I was pregnant right now, I would absolutely have an abortion. Anyone who votes, pickets or engages in terrorist bombings to restrict my right to do so has assaulted me.

We have been on the defensive for too long. We have watched women being harassed, doctors murdered and clinics bombed. In the face of arrogant legislation that reduces women to incubators, our protests have been feeble. It is time to stop apologizing.

Anti-choice zealots love to flash placards full of blood and guts at women on the way to their doctors. If we educated women about health care, this propaganda couldn’t intimidate them. Abortion is a bit bloody. So is a root canal. It’s a ______ operation. If you think abortion is gruesome, you should see childbirth, an ordeal that is ten times more dangerous to a woman’s health.

The thing is, there can be no common ground on choice. Any limitation on my right to have an abortion whenever I want one is an absolute violation. Anti-choicers have declared war on women. Now it’s up to us to fight back. If that means guarding the clinic doors with Uzis, then that’s what will have to be done. Just once, I’d like to see someone blow up one of their churches.

This week is anti-choice week at UB. If you see one of them showing their disgusting videos or playing with toy fetuses, do your part and spit at them. Kick them in the head. Give them the name of your therapist.

Or, come to a protest on Wednesday in the Student Union. Wear black to show you will not be forced to have a child against your will. They’ve set up hundreds of popsicle stick crosses near Flint Road. They call it “Cemetery of the Innocents.” I call it graveyard of the oppressed. To me, those crosses stand for desperate women, forced by religious lunatics into a horrifying death by knitting needle or Lysol. I will not let them make me one of those women. The anti-choicers say women’s lives are worth nothing compared to fetuses.

I say their God is worth nothing compared to my body.

This article appeared in the Fall 1996 issue of Eternal Perspectives.

audio May 6, 2011
In this minute long audio clip, Randy Alcorn talks about secular professors teaching moral relavitism to their students.
Invest in Eternity