The True Hero Of The Titanic

John Harper was born to a pair of solid Christian parents on May 29, 1872. It was on the last Sunday of March 1886, when he was thirteen years old that he received Jesus as the Lord of his life. He never knew what it was to “sow his wild oats.” He began to preach about four years later at the ripe old age of 17 by going down to the streets of his village and pouring out his soul in earnest entreaty for men to be reconciled to God.

As John Harper’s life unfolded, one thing was apparent...he was consumed by the Word of God. When asked by various ministers what his doctrine consisted of, he was known to reply, “The Word of God!”

After five or six years of toiling on street corners preaching the gospel and working in the mill during the day, Harper was taken in by Rev. E. A. Carter of Baptist Pioneer Mission in London, England. This set Harper free to devote his whole time and energy to the work so dear to his heart. Soon John Harper started his own church in September of 1896 (now known as Harper Memorial Church). This church, which John Harper had started with just 25 members, had grown to over 500 members when he left 13 years later. During this time he had gotten married but was shortly thereafter widowed. However brief the marriage, God did bless John Harper with a beautiful little girl named Annie Jessie “Nina” Harper.

Ironically, John Harper almost drowned several times during his life. When he was two and a half years of age, he almost drowned when he fell into a well but was resuscitated by his mother. At the age of twenty-six, he was swept out to sea by a reverse current and barely survived, and at thirty-two he faced death on a leaking ship in the Mediterranean. Perhaps God used these experiences to prepare this servant for what he faced next. 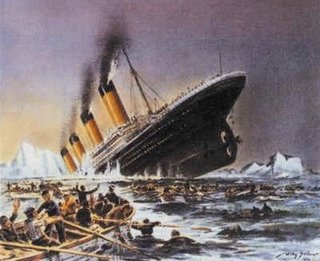 It was the night of April 14, 1912. The R.M.S. Titanic sailed swiftly on the bitterly cold ocean waters heading unknowingly into the pages of history. On board this luxurious ocean liner were many rich and famous people. At the time of the ship’s launch, it was the world’s largest man-made moveable object. At 11:40 p.m. on that fateful night, an iceberg scraped the ship’s starboard side, showering the deck with ice and ripping open five watertight compartments. The sea poured in.

On board the ship that night was John Harper and his much-beloved, six-year-old Nina. According to documented reports, as soon as it was apparent that the ship was going to sink, John Harper immediately took his daughter to a lifeboat. It is reasonable to assume that this widowed preacher could have easily gotten on board this boat to safety; however, it never seems to have crossed his mind. He bent down and kissed his precious little girl. Looking into her eyes, he told her that she would see him again someday.

The flares going off in the dark sky above reflected the tears on his face as he turned and headed towards the crowd of desperate humanity on the sinking ocean liner. As the rear of the huge ship began to lurch upwards, it was reported that Harper was seen making his way up the deck yelling, “Women, children and unsaved into the lifeboats!” It was only minutes later that the Titanic began to rumble deep within. Most people thought it was an explosion; actually the gargantuan ship was literally breaking in half. At this point, many people jumped off the decks and into the icy, dark waters below. John Harper was one of these people.

That night 1528 people went into the frigid waters. John Harper was seen swimming frantically to people in the water leading them to Jesus before the hypothermia became fatal. Mr. Harper swam up to one young man who had climbed up on a piece of debris. Rev. Harper asked him between breaths, “Are you saved?” The young man replied that he was not.

Harper then tried to lead him to Christ, only to have the young man who was near shock, reply, “No.” John Harper then took off his life jacket and threw it to the man and said, “Here then, you need this more than I do...” and swam away to other people. A few minutes later Harper swam back to the young man and succeeded in leading him to salvation. Of the 1528 people that went into the water that night, six were rescued by the lifeboats. One of them was this young man on the debris.

Four years later, at a survivors’ meeting, this young man stood up and in tears recounted how that after John Harper had led him to Christ, Mr. Harper had tried to swim back to help other people, yet because of the intense cold, had grown too weak to swim. His last words before going under in the frigid waters were “Believe on the name of the Lord Jesus and you will be saved.”

Does Hollywood remember this man? No. Oh well, no matter. This servant of God did what he had to do. While other people were trying to buy their way onto the lifeboats and selfishly trying to save their own lives, John Harper gave up his life so that others could be saved.

“Greater love hath no man than this, that he lay down his life for his friends.” John Harper was truly the hero of the Titanic!