Abortionists, feminists, the president of the United States, many congressmen, and the Supreme Court have defended partial-birth abortion, one of the most chilling medical atrocities in human history.

On June 28, 2000, in Carhart vs. Nebraska, the U. S. Supreme Court struck down a Nebraska law preventing late-term abortions. The law essentially required that viable babies be permitted to be delivered alive rather than be deliberately and violently killed just before birth. Dr. LeRoy Carhart, the late-term abortionist quoted on page 11, challenged Nebraska’s right to keep him from performing partial-birth abortions. The Supreme Court sided with Carhart. 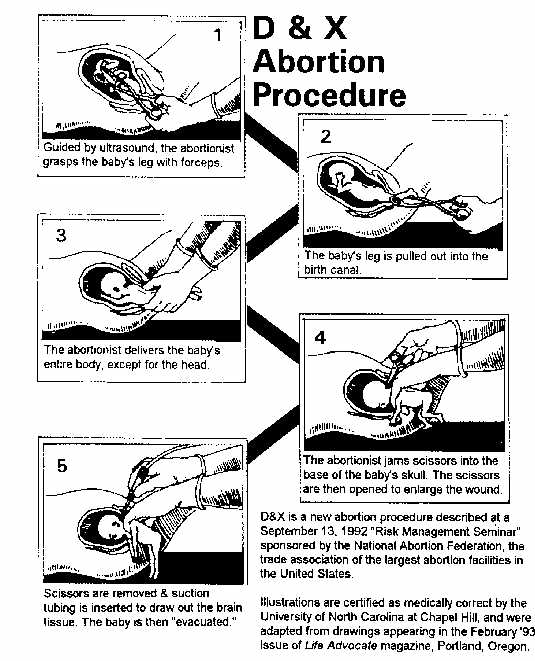 President Clinton vetoed a 1995 bill that would have banned partial-birth abortions (Randy Alcorn, “Partial-Birth Abortions: What’s the Big Deal?”). Some in Congress vowed to override the veto. In September 1996, they finally failed to gain the necessary votes to do so. At that point the U.S. government became an accessory to a procedure so gruesome it would horrify most people living in the most primitive cultures. While killing children has been legal since the judicial branch’s Roe v. Wade decision in 1973, this was the first direct endorsement of the United States government’s executive and legislative branches of what is, without question, infanticide. In June the judicial branch joined in.

The accompanying illustration accurately depicts the process of partial-birth abortion. Keep in mind that the child pictured here is no more nor less valuable than smaller children who die in earlier abortions.

In a partial-birth (also called D & X) abortion the child is delivered live until only the head remains in the birth canal. The abortionist then uses a pair of scissors to rip a wound in the base of the living child’s skull. He inserts a tube into the wound and sucks the helpless child’s brain out with a vacuum pump. The now-dead infant’s skull collapses, and the body is removed the rest of the way from the mother. Dr. Carhart’s testimony was about this kind of procedure.

If a veterinarian performed a partial-birth abortion on a dog at his clinic, not only animal rights activists, but the media and general public would be outraged. The fact that it is being done on human beings-and that Congress could not usher enough votes to overturn the president’s veto on their efforts to make it illegal-documents the moral slippery slope of abortion. It also demonstrates the shadow of evil that hangs over not only the abortion industry, but our political leaders and our nation.

In December 1999 the Nebraska University Regents Board  of Regents met to discuss the situation when it was discovered the University of Nebraska Medical Center was conducting experiments using brain tissue from children aborted by Dr. Leroy Carhart, a specialist in the D & X abortion technique. When a board member tried to prevent someone from reading Dr. Carhart’s testimony, it was decided that since Carhart was a specialist in an area perfectly suited for collecting live brain tissue, his testimony concerning his specialty was relevant to the discussion.

Someone then read to the board Dr. Carhart’s court statement, given in July 1997. Testifying under oath, Carhart spoke of procedures which, had they been described by a prolife advocate, would have been considered outrageous. Significantly, very few newspapers and television stations reported any substantial contents from the testimony. (Dr. Carhart’s clinic’s website is www.abortionclinics.org/. Information about Dr. Carhart is furnished by the clinic under “Our Doctor” at www.abortionclinics.org/our.htm. The clinic also provides large pictures and other information about “antichoice” individuals under “Our protestors” at www.abortionclinics.org/our1.htm, instructing people to “avoid contact” with them.) However, the reading of the testimony was taped and played on a local radio program the following Monday, entering it into the public arena.

What follows are excerpts from that testimony, with questions from an attorney and judge. I will let the testimony stand on its own, without further comment, so the reader can judge for herself the significance of what abortion really is and why most of the public was never given the opportunity to hear this testimony:

Are there times when you don’t remove the fetus intact?

Can you tell me about that, when that occurs?

Carhart: That occurs when the tissue fragments, or frequently when you rupture the membranes, an arm will spontaneously prolapse through the os...we talk about the forehead or the skull being first. We talked about the feet being first, but I think in probably the great majority of terminations, it’s what they would call a transverse lie, so really you’re looking at a side profile of a curved fetus. When the patient’s uterus is already starting to contract and they are starting to miscarry, when you rupture the waters, usually something prolapses through the uterine, through the cervical os, not always, but very often an extremity will.

What do you do then?

Carhart: My normal course would be to dismember that extremity and then go back and try to take the fetus out either foot or skull first, whatever end I can get to first.

How do you go about dismembering that extremity?

Carhart: Just traction and rotation, grasping the portion that you can get ahold of which would be usually somewhere up the shaft of the exposed portion of the fetus, pulling down on it through the os, using the internal os as your counter-traction and rotating to dismember the shoulder or the hip or whatever it would be. Sometimes you will get one leg and you can’t get the other leg out.

In that situation, are you, when you pull on the arm and remove it, is the fetus still alive?

Do you consider an arm, for example, to be a substantial portion of the fetus?

Carhart: In the way I read it, I think if I lost my arm, that would be a substantial loss to me. I think I would have to interpret it that way.

And then what happens next after you remove the arm? You then try to remove the rest of the fetus?

Carhart: Then I would go back and attempt to either bring the feet down or bring the skull down, or even sometimes you bring the other arm down and remove that also and then get the feet down.

At what point is the fetus...does the fetus die during that process?

Carhart: I don’t really know. I know that the fetus is alive during the process most of the time because I can see fetal heartbeat on the ultrasound.

The Court: Counsel, for what it’s worth, it still is unclear to me with regard to the intact D & X when fetal demise occurs.

Okay, I will try to clarify that. In the procedure of an intact D&E where you would start foot first, with the situation where the fetus is presented feet first, tell me how you are able to get the feet out first.

At the time that you bring out the feet, in this example, is the fetus still alive?

Then what’s the next step you do?

Carhart: I didn’t mention it. I should. I usually attempt to grasp the cord first and divide the cord, if I can do that.

What is the cord?

Carhart: The cord is the structure that transports the blood, both arterial and venous, from the fetus to the back of the fetus, and it gives the fetus its only source of oxygen, so that if you can divide the cord, the fetus will eventually die, but whether this takes five minutes or fifteen minutes and when that occurs, I don’t think anyone really knows.

Are there situations where you don’t divide the cord?

Carhart: There are situations when I can’t.

Carhart: I just can’t get to the cord. It’s either high above the fetus and structures where you can’t reach up that far. The instruments are only 11 inches long.

Let’s take the situation where you haven’t divided the cord because you couldn’t, and you have begun to remove a living fetus feet first. What happens next after you have gotten the feet removed?

Carhart: We remove the feet and continue with traction on the feet until the abdomen and the thorax come through the cavity. At that point, I would try...you have to bring the shoulders down, but you can get enough of them outside, you can do this with your finger outside of the uterus, and then at that point the fetal...the base of the fetal skull is usually in the cervical canal.

What do you do next?

Carhart: And you can reach that, and that’s where you would rupture the fetal skull to some extent and aspirate the contents out.

At what point in that process does fetal demise occur between initial remove...removal of the feet or legs and the crushing of the skull, or I’m sorry, the decompressing of the skull?

Carhart: Well, you know, again, this is where I’m not sure what fetal demise is. I mean, I honestly have to share your concern, your Honor. You can remove the cranial contents and the fetus will still have a heartbeat for several seconds or several minutes, so is the fetus alive? I would have to say probably, although I don’t think it has any brain function, so it’s brain dead at that point.

So the brain death might occur when you begin suctioning out of the cranium?

Carhart: I think brain death would occur because the suctioning to remove contents is only two or three seconds, so somewhere in that period of time, obviously not when you penetrate the skull, because people get shot in the head and they don’t die immediately from that, if they are going to die at all, so that probably is not sufficient to kill the fetus, but I think removing the brain contents eventually will.

(Testimony of Leroy Carhart, M.D. Scanned documents of Carhart’s testimony are at www.operationsaveamerica.org/streets/ne/carhart.html)

audio April 21, 2010
Randy Alcorn answers the question, "What do the descriptions of Abortion procedures tell us?"

audio April 20, 2010
Randy Alcorn answers the question, "How do you answer those who deny the photographic evidence?" 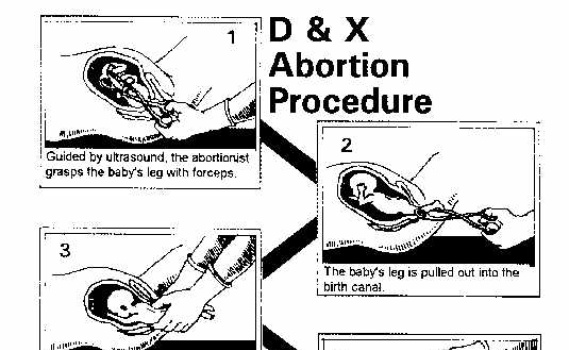 article September 30, 2003
Partial-birth or D&X abortion is a particularly horrific form of late-term abortion, in which the child is delivered live until only the head remains in the birth canal.
Invest in Eternity