Not Divesting, But Investing

What’s the biggest misconception Christians have about giving? That when we give money away to a church or ministry, or to help the needy, it’s gone. While we hope others will benefit from it, we’re quite sure we won’t. We think we’re divesting ourselves of money, disassociating from it. Once it leaves our hands, we imagine, it has no connection to us, no future implications relevant to our lives.

We couldn’t be more wrong.

What we think we own will be rudely taken from us, some of it before we die, and anything that’s left the moment we die. But now is our window of opportunity not to divest ourselves of money, but to invest it in heaven. We don’t have to have everything taken from us. We can give it before disaster or death strike. Now’s our chance to give what we can’t keep to gain what we can’t lose.

We are God’s money managers. He wants us to invest His money in His kingdom. He tells us He’s keeping track of every cup of cold water we give the needy in His name. He promises us He will reward us in heaven because we help the poor and needy who cannot pay us back for what we do for them.

We can buy up shares in God’s kingdom. We can invest in eternity.

Why Giving is Better than Receiving

When Jesus said “It is more blessed to give than to receive,” He really meant it (Acts 20:35). It sounds counter-intuitive, doesn’t it? But when you give, you plug into God’s law of rewards. You experience dramatic and lasting returns for the investments you’ve made. When you give, you receive far more than when you keep.

When you give, therefore, it is not only for the glory of God and the good of others—though those would certainly be good enough reasons. When you give, it is for your good too. Like the law of gravity, the law of rewards operates constantly, even when we give it no thought.

Some would think he’s foolish to talk this way. But I’m convinced he’s absolutely right.

I spend a lot of time talking with givers. At one gathering, we went around the room and told our giving stories. I took notes. The most common words used to describe giving were “fun,” “joy,” “exciting,” and “wonderful.” There were lots of smiles and laughter, even tears of joy. One older couple shared how they’re always traveling around the world getting involved in the missions work they support. Meanwhile, their house in California is getting run down. They said, “Our children keep telling us, ‘Fix up your house, or buy a new one. You can afford it!’ We tell them, ‘Why would we do that? That’s not what excites us!’”

Many Christians don’t give. Others determine to do their part but sigh deeply before writing a check to their church or ministry. They give strictly out of a sense of duty and obligation. Better to give out of duty than not give at all, but how sad to miss out on the joy. That joy comes when you understand God’s law of rewards.

What’s the difference between reluctant and joyful givers? Reluctant givers give as if they were spending, and getting nothing in return. Joyful givers give as if they were investing, anticipating a great deal in return. While some Christians give with all the enthusiasm of paying their taxes, others “get it,” and are infused with joy and purpose. Those who “get it” understand the law of rewards. Those who “don’t get it,” don’t understand. They don’t know what they’re missing...and what they’re missing is something truly great.

When they hand over money, investors don’t say to themselves, “I’ll never see this again; I’ll never benefit from it.” No. The reason they invest is because they not only believe in what they’re doing, but are anticipating eventual benefits that will come back to them. What will come back is rewards.

Most Christians have heard about eternal rewards, but many consider them to be figurative-nice words about crowns, but come on, who wants a crown anyway? A chalet in the mountains, a new boat, golfing on the finest courses and going to the Bahamas...doesn’t that sound like a lot more fun? Why wait for something later that doesn’t sound that great anyway?

This is one of our problems. We forget earth is not our home, so we waste our lives pouring ourselves and our money into what will go up in smoke. Meanwhile, God offers us the opportunity to experience a down payment of joy-the delight that comes today in doing what you know God wants, and anticipating hearing Him say to you tomorrow, “Well done.”

Too often we think of heavenly rewards as unconnected to our earthly actions. In fact, they are tangible dividends we can gain by the things we do and say on earth.   As we’ll make clear later, this isn’t salvation by works; faith in Jesus is our one and only grounds for entering heaven. But the Bible shows that while our faith determines our eternal destination, our behavior—including what we do with our money—determines our eternal rewards.

In this book we’ll talk about how we can honor God with our money, what actions and attitudes God rewards, what eternal rewards are, and why it’s okay—and in fact, important—to be motivated by them. We’ll see that giving isn’t about trying harder to do the right thing while quietly resenting our sacrifices. It’s about understanding how God made us and responding joyfully to the way he motivates us. It’s about seeing what God is doing, and eagerly buying up shares. (Who wants to be left out of the world’s greatest investment opportunity?)

Let’s open our minds to truths of Scripture that lay buried beneath this culture’s rocky surface. Let’s discover together the life-changing, eternity-impacting paradigm shift offered us in the law of rewards.

The Power of Incentives

Businesspeople work in a world of incentives. So do homemakers, schoolchildren, and every other human being, regardless of age, nationality, or wealth. Every effective manager, every wise leader knows the importance of incentives. These are tangible motivators that may be personal, social, spiritual, physical, or financial. Unfortunately, too many Christians consider incentives to be “secular” or “carnal” or “unspiritual.”

To say, “I don’t do anything for the reward—I do it only because it’s right,” may appear to take the spiritual high road. But in fact it’s pseudospiritual. It goes against the grain of the way God created us and the way He Himself motivates us. And it completely contradicts all the passages of Scripture that clearly attempt to motivate us by our desire for rewards. When we say “You shouldn’t do anything to get a reward,” do we imagine we are more spiritual than Jesus, Paul, and God’s Word?

When our daughters lived in our home as teenagers, suppose I’d told one of them, “If you do a full day of yard work Saturday, I’ll pay you $50 and take you out to a nice dinner.” Would it be wrong for her to want to earn the $50? Would it be wrong for her to look forward to going out to a nice dinner with her dad? Of course, it wouldn’t be wrong! I’m her father, I made the offer, and I want her to want those things!

“But God doesn’t owe us anything,” you might argue. “He has the right to expect us to work for Him with no thought of reward.” True, we should be willing and happy to serve Him, even if there is no payoff. Jesus addressed this when He said, “So you also, when you have done everything you were told to do, should say, ‘We are unworthy servants; we have only done our duty’” (Luke 17:10).

The point is, God owes us nothing. So if we came to Him and said, “You owe us—we want to be paid,” we would be dead wrong.

But here’s the incredible thing, the factor that turns the entire debate on its head—it wasn’t our idea that God would reward us. It was His idea! Satan didn’t make up the idea of incentives. Our sin nature didn’t make it up. A corrupt world didn’t make it up. God made it up. He designed us to need incentives to motivate us to do our jobs and do them well.

Suppose my daughter did the yard work joylessly and then said, “Dad, I just did my duty. I refuse the money. And I don’t want to go to dinner with you.” How would that make me feel?

We flatter ourselves—and insult God—when we say, “I don’t care about reward.”

He doesn’t have to reward anyone for anything. He does it because He wants to! And make no mistake, regardless of what you and I think about it, that’s exactly what he’s going to do: “For the Son of Man is going to come in his Father’s glory with his angels, and then he will reward each person according to what he has done” (Matthew 16:27, italics mine).

The problem with short-term rewards is not that it's wrong to receive them, but that it's wrong for them to be our primary motivation for doing the work. If we take Matthew 6 seriously, when we offer people their name on a brick for giving to a building offering we're saying "Hope you enjoy this brick, because if this is why you're giving, the brick's all the reward you're going to get."

Readers of my books often question whether the doctrine of eternal rewards is biblical. They say, It seems self-centered to do good works so I will be rewarded.

How Should Christians Think About Investing?

Rewards in Heaven: Satisfied or Jealous?

Randy Alcorn answers the question,"Will we be satisfied with the rewards we receive in Heaven or will we be jealous of others' rewards?" 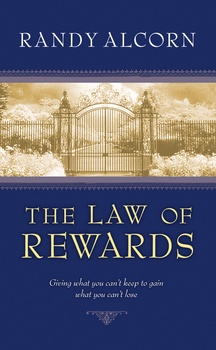 The Law of Rewards: Discussion Questions

PDF version of The Law of Rewards Book Discussion Guide.

How Does a Servant’s Heart on Earth Affect One’s Rewards in Heaven?

Service is a reward, not a punishment. This idea is foreign to people who dislike their work and only put up with it until retirement. We think that faithful work should be rewarded by a vacation for the rest of our lives. But God offers us something very different: more work, more responsibilities, increased opportunities, along with greater abilities, resources, wisdom, and empowerment. 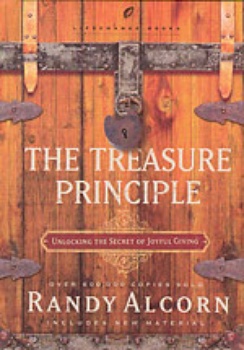 Can We Really Earn Eternal Rewards?

I did use the word “earn” in a few places in my books Money, Possessions and Eternity and In Light of Eternity. But in its context in both books I used “earn” in the sense of a Christ-empowered obedience resulting in God graciously granting us the rewards he promises.

If even Paul said that gaining Christ made “everything else” seem comparatively worthless, doesn’t that show that Christ should be the treasure we are seeking after?
Invest in Eternity