What Does Your Clothing Communicate?

If I tell you that there’s a woman coming down this church aisle in a long, white, formal dress, what would you say is probably the occasion? It’s a wedding; she’s a bride. How did you know? Because clothing communicates.

If I tell you there’s a teenager bundled up in a snowsuit, mittens, a wool hat and a scarf would you agree with me that the teenager is probably not on his way to a picnic?

Clothing and appearance send a message. They can communicate our occupation or an occasion we’re marking. In some of the world’s religions, women are clearly identifiable by their dress.

Clothing can communicate something about our socio-economic status. You can look at some people and think, “She looks like a wealthy woman.” Or you might look at another woman and—purely on the basis of her clothing—say, “She doesn’t look like she comes from a financially stable background.”

Clothing also communicates a message about our values, our character, our attitudes. For example, you can look at the dress of some and tell that neatness is not a concern to them.

The Bible speaks of occasions when people would wear sackcloth as a sign of mourning or repentance. So, if someone was wearing sackcloth, he was sending a message about what was going on in his heart.

Scripture also indicates that clothing can send a message about our morals or the lack thereof. For example, in Proverbs 7:10 we read of the adulteress that she was “dressed as a harlot” (NASB). The woman is dressed in such a way that you can look at her and see that her motives are not pure toward this man.

In Genesis 38:13ff., we learn of a woman named Tamar, a widow who wanted to seduce a man to whom she was not married. Accordingly, she took off her widow’s garments (v.14). Such garments were a specific type of clothing that would have communicated that she was a widow. Tamar, however, changed her clothes and put on the clothing of a prostitute, for the man she was trying to seduce knew her. In fact, he was her father-in-law. But when she changed her clothes, he didn’t recognize who she was. He just looked at her clothes, and judging her to be a prostitute, he went in to be sexually intimate with her. Of course, I point that out not to justify him, but to demonstrate that clothing can send a powerful message.

It is just as true today that women are sending a message with their clothing. Many of them know exactly what message they’re sending. Perhaps some others are naive, having become so influenced by this culture that they don’t know any other way to think about clothing.

Kim Alexis was a super-model in the eighties. Her picture was on over 500 magazines covers including Vogue and the Sports Illustrated swimsuit edition. She’s had a change of heart about many things, and today she realizes that she made a lot of mistakes. Now she’s challenging women to think about the message they are sending when they dress sensually.

Here’s what she has to say: “Many women are playing with fire in the way they dress. Dressing like a floozy tells the world, ‘Look at me, want me, lust after me. I’m easy and you can have me.’ Displaying intimate parts of the body,” she says, “is a form of advertising for sex.”

As women, clothing and appearance are some of the most powerful and important means we have of sending a message about our hearts and our values.

So here’s the question. What do your clothes and your appearance communicate about you. What message are you sending?

As Christian women we need to ask one another, “Is the message you’re sending consistent with what you really believe, or are you sending a mixed message? Are you thinking one thing in your heart, but sending a message that you don’t intend or ought not to send with your outward appearance?”

I find, today, that there are a lot of women who really do have a heart for the Lord. They may be faithfully involved in a local church. And they may be actively involved in gospel ministry. And they may lift up their hands in joyful acclamation to the Lord when singing songs of praise. And yet, many of these very same women may also be totally oblivious of the message that they are sending with their body and with their clothing.

Their clothing is communicating something far different than what’s in their hearts.

Unfortunately, this issue represents an area where too many Christian women have accepted the secular world’s way of thinking, with the rationalization that “Maybe it’s okay so long as we just don’t go to the farthest extremes.”

That’s why we have to go back to the Word of God and ask, “What is God’s way of thinking about all this? What message should we be sending? And how can we send that message with our clothing and with our outer appearance?”

The way we think, the way we act, the choices we make, the way we relate to others, and yes, even the way we dress sends a message.

Taken from The Look: Does God Really Care What I Wear? by Nancy Leigh DeMoss (Copyright © 2003). Nancy is the host of Revive Our Hearts, a daily radio program heard on more than 230 stations. For information on the three-week Modesty radio series by Nancy, visit www.ReviveOurHearts.com. 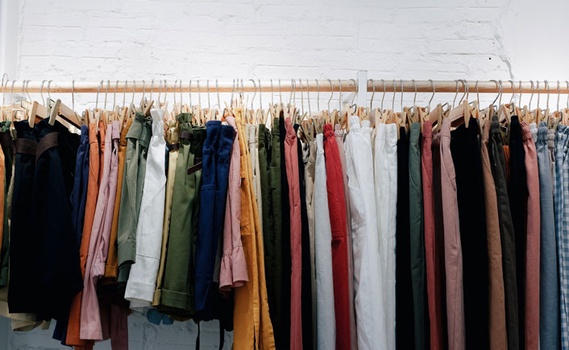 What Not To Wear

Do You Have Any Modesty Tips for Men?

article September 7, 2011
Avoiding frontal hugs is one of the ways a man can pursue modesty and sexual purity.
Invest in Eternity