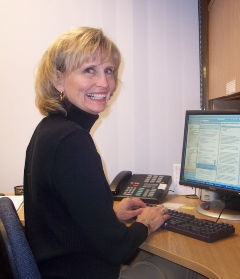 (Wonder about the title? This was put in temporarily, but we got used to it, and decided to keep it!)

How long have you known and worked for Randy?

I’ve known Randy since he was a freshman in high school. He attended a high school church retreat with a girl he was interested in. My husband and I were college chaperones and I pulled this girl aside and told her she shouldn’t even consider dating a guy who wasn’t a Christian. Well, it wasn’t long before Randy committed his life to Christ, dated this girl named Nanci, and they’ve been happily married for over 35 years!

I’ve worked at EPM since 1997, and for several years previously was one of Randy’s part-time secretaries when he was a pastor.

What do you like most about working for Randy and Eternal Perspective Ministries?

What are the most difficult parts of your job?

What are some things about Randy most people wouldn’t know?

So what exactly do you do at EPM?

Much of my time is taken up in communication either by email or phone. “Can Randy come speak at…? What does Randy think about…? Has Randy read the book…? Could I meet Randy for lunch to talk about…? Could he call me about…? Would he read my manuscript about…?”

One of the best parts of my job is getting to speak with so many wonderful and interesting people whose lives have been touched by Randy’s writings.

What would you like others to know about yourself?

I have a full and meaningful life and am blessed far more than I deserve with a great husband, three children, and nine precious grandchildren. God has proven himself faithful through various trials in my life and that is the message I want to leave with others: He is faithful and He is trustworthy, no matter how dark the storm. He never wastes an experience on us but will always use it for good in our lives to grow us up in Him. So I can “count it pure joy when I encounter various trials…” (James 1:2).

And I love to laugh.