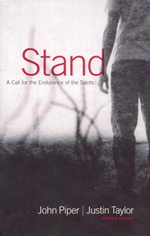 Stand: A Call for the Endurance of the Saints

This thoughtful series, taken from the Desiring God 2007 National Conference, not only elevates the virtue of godly endurance but bears witness to its power in the Christian life through the exhortations of John Piper, John MacArthur, Jerry Bridges, Randy Alcorn and Helen Roseveare. Available from www.Christianbook.com and www.DesiringGod.org

Crossway Books & Bibles (CBB): Where did the book title originate?

Randy Alcorn (RA): Stand was the title of Desiring God’s 2008 national conference, which featured as speakers the contributors to this book. Stand expresses the idea of holding ground over a life time. It relates to the theme of Revelation 14:12: “Here is a call for the endurance of the saints, those who keep the commandments of God and their faith in Jesus.”

CBB: Why does endurance in the Christian life, once an esteemed and sought-after virtue, seem so unattainable today?

RA: Today’s roadblocks and distractions make endurance in the Christian life seem unattainable. Our temptations aren’t worse than those in first-century Corinth. But televisions, computers, and even cell phones bring into our homes what used to be found only in back alleys. In our technological Corinth, temptations are only a keypad or mouse click away.

Failure to endure has become normal thanks to our disposable society as well. We use something up, then toss it (whether a paper plate, a spouse, a church, or a career). The stick-to-it philosophy is a relic of another age—something monks once did, but we can’t. And why should we? Who wants to work hard or become bored by staying a course when endless alternatives call to us? But the essence of the Christian life cannot change with culture. We are to follow Christ from start to finish.

CBB: The contributors to this book represent different spheres of enduring commitment. Tell us about them.

RA: You can see this as you read their respective chapters. John MacArthur is the pastor who has stayed in one place a long time and weathered many battles in defending, confirming, and proclaiming the truth. Jerry Bridges has taught us how to keep on trusting God in the pursuit of holiness through decades of faithful ministry amid cancer and loss. John Piper has been giving serious thought and study to what it means to get old to the glory of God and overcoming what is truly a fear of persevering for many people. I was asked to participate because of how my life has been affected by my involvement in prolife work. Helen Roseveare endured through upheaval and war in the Congo and stayed on the path of obedience both in her time there and in the years of global missions inspiration every since.

CBB: Jerry Bridges distinguishes between perseverance and endurance. What’s the difference, and why is it important?

RA: The two are very similar in meaning, and often we equate the two, but Jerry says there can be a subtle difference. The word endure means to stand firm, and that is the theme of this book. We are to stand firm. We’re not to be carried about by every wind of doctrine theologically. We’re not to go off to this and that and the other. But we need to do more than stand firm. We need to move forward. According to Jerry, when Paul says, “I have finished the race” (2 Timothy 4:7), he was talking about motion. Perseverance means to keep going in spite of obstacles. So standing firm according to Scripture is more than standing still. We must move forward and persevere. We must be like Paul and say, “I have fought the good fight, I have finished the race, I have kept the faith.”

CBB: What do you consider to be the greatest threats to endurance in the Christian life and the greatest helps?

RA: If you insist on being respected and praised, in society or in the church, you will walk away not only from the cause but from your Lord. Jesus said, “No servant is greater than his master. If they perse­cuted me, they will persecute you also” (John 15:20). Who are we to expect the world to treat us better than it treated Jesus? Followers of Jesus should expect injustice and misrepresentation, and we dare not be preoccupied with our rights and reputations. If you are not willing to be misunderstood and vilified, you won’t endure in any worthwhile cause.

Hour-to-hour and day-to-day choices will either set us up for spiritual distraction and failure—or will be the key to our endurance. Every day we are becoming someone—the question is, who? Who you become will be the cumulative result of the daily choices you make: You will become the product of what you choose to delight in and meditate upon. You will become the kind of person you choose to spend time with, whether at work or school or church or the coffee shop.

Since endurance is never automatic, following Christ requires repeated actions on our part, which develop into habits and life disciplines. The key to spirituality, and to defeating the threats to Christian endurance, is the development of little habits, such as Bible reading and memorization and prayer. Endurance also involves daily choices to do good works. If you wish to persevere, ask God to empower you to put one foot in front of the other. Then start moving your feet, like Jerry Bridges said.

Endurance also means keeping discipline’s purpose in front of us. What do soldiers, athletes, and farmers have in common? They all take physical action. They are disciplined. They are deliberate. They work hard. Only then do they enjoy the pleasure of victory and harvest. Without hard work, no Christian will endure. Endurance requires a lifetime of yielding your body to the Holy Spirit, not easing into things.

CBB: What purpose does it serve to expect hardship and opposition in our faith journey?

RA: If you expect it, you can be prepared for it. If you don’t expect it, you won’t be ready to face it. The Bible is full of admonitions to not be surprised by difficulty. God’s Word also affirms the eternal purposes of adversity. James 1:2-4 says we develop perseverance in order to be complete and mature in Christ. 2 Timothy 2:3-6 tell us we are soldiers of Christ Jesus and should want to please him by enduring until the end, according to the plan he has laid out for us. Hebrews 12:1-3 states that there is joy waiting for us: we have the example of Christ and his endurance, so we won’t grow weary and lose heart. And Hebrews 12:7-11 declares that hardship is to be endured as discipline. God disciplines us for our good in order to produce righteousness and peace in our lives.

CBB: What are some practical strategies for cultivating the courage to stand?

RA: One thing I’ve learned about endurance in a cause is: don’t be pri­marily motivated by anger. There’s significant wear and tear upon those called to prolife work, jail ministry, street ministry, helping the poor, reaching out to addicts, and fighting pornography. If you’re going to endure, you must have a passion for Jesus that’s bigger than your passion for the cause. Otherwise, even if you don’t burn out, your cause will take the place of your Lord, thereby becoming an idol.

Lose yourself. Not in a righteous cause but in a righteous God who calls us to a variety of causes and sustains us wherever he calls us. Don’t be a single-issue Christian. Chuck Colson’s heart is huge for prison ministry, but much more. Joni Eareckson Tada cares deeply about the disabled, but she cares about far more. Chuck and Joni love Jesus, and that love wells up in ministries to prisoners and the disabled. That’s how you find staying power in a cause—seeing that it isn’t an isolated issue. It’s part of the larger scheme of God’s kingdom work.

If your life is centered on being against abortion or pornography or homosexual marriage, that isn’t enough. William Wilberforce didn’t just oppose slavery. He was in love with Jesus, and it was Jesus who sustained him through the abolition of the slave trade. It was Jesus he thanked three days before his death, when he heard the news from the House of Commons that all remaining slaves in Britain and her colonies had been declared free. So to endure in a cause, keep reminding yourself it’s about Jesus: “The King will answer them, ‘Truly I say to you, as you did it for one of the least of these brothers, you did it to me’” (Matthew 25:40). If it’s not about Jesus, why is it your cause?

RA: There is a need to go deeper, to build Christlike character, to renew our minds by studying Scripture and reading great books. I’m deeply concerned about the plummeting literacy rate, especially among young men. Increasingly, boys spend their time on video games, movies, television, websites, iPods, and phones that have everything from text messaging to Internet to television. They are reading significantly less than boys of previous generations. Boys who don’t read become men who don’t read. If someone’s not a reader, he’s not a reader of God’s Word. Unless this trend is reversed—which will not happen without decisive intervention—it will result in a tide of unrighteous thinking and living, as well as a vast crisis of leadership in tomorrow’s church.

We are in serious danger of losing coming generations to shal­lowness, immorality, and heresy because they are not digging deep into Scripture and great books grounded in Scripture. Families and churches that are committed to building enduring Christian character must address this problem head-on.

RA: In January 2007 when we met them they were on furlough. Until that weekend I didn’t know anything about these people. But when we were talking about Peru, Bert smiled and said, “I can’t wait to get back.” Now in their eighties, they’re nearing their sixtieth year as missionaries. Bert and Colleen Elliot will enter God’s Kingdom “under the radar” of the church at large, but not under God’s.

Bert said something to me that day I’ll never forget: “Jim and I both served Christ, but differently. Jim was a great meteor, streaking through the sky.” Bert didn’t finish by describing himself, but I’ll describe him this way: a faint star that rises night after night and faithfully crosses the same path in the sky, unnoticed on earth. Unlike his brother Jim, the shooting star.

I believe Jim Elliot is experiencing great reward. But I wouldn’t be surprised to one day discover that Bert and Colleen Elliot’s reward is even greater. “Multitudes that sleep in the dust of the earth will awake: some to everlasting life, others to shame and everlasting contempt. Those who are wise will shine like the brightness of the heavens, and those who lead many to righteousness, like the stars forever and ever” (Daniel 12:2–3). Bert and Colleen Elliot have lived a long obedience in the same direction. Whether we follow God to leave our country or to stay here, all of us are likewise called to a life of faithful endurance, empowered by Christ.

This interview with Randy Alcorn is from the Summer/Fall 2008 issue of The Book Report, new book information and publications update from Crossway Books & Bibles, a publishing ministry of Good News Publishers.