Why Do You Seldom Hear About Christ's Ascension?

I hear talk about Christ’s death and resurrection, but seldom about his ascension. Why is that?

It’s true that the ascension is a neglected doctrine. It was considered more important to earlier generations of Christians than it is today.

One remarkable thing about the ascension is that it affirms Christ’s physical body went into Heaven following his resurrection. This is what the creeds call his “self-same body,” stating that likewise our self-same bodies will be restored in our resurrection. Some Christians imagine that Christ shed himself of his humanity and returned to being a completely spiritual being when he went back to Heaven. But this is false. The ascension creates a paradigm shift. The truth is not that Jesus became a baby at Christmas, and then 33 years later came the resurrection and ascension and then he stopped being a man. The resurrection demonstrates the incarnation is not temporary. But still it could be wondered if having defeated death in the resurrection, when it came time to going back to Heaven, Christ might have said “time’s up, no sense in being a man any more” and shed himself of a body and retake the form (or lack of form) inherent in being the second member of the trinity. 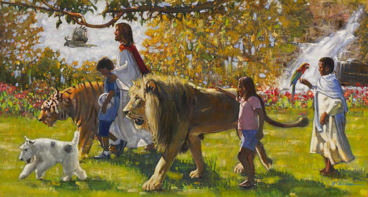 He could have “dissolved” or “disappeared,” but instead he physically ascended to a place, from which he will physically return to earth in the same physical body. So Jesus became a man (first coming, incarnation), defeated death and assumed his eternal body as a man (resurrection), and went back to Heaven as a man (ascension) and will return as a man (second coming; and as our firstfruits raising our self-same bodies as bodies like his). He will reign over the New Earth as the God-man. He has become a permanent member of the human race.

As Job put it, “I know that my Redeemer lives, and that in the end he will stand upon the earth. And after my skin has been destroyed, yet in my flesh I will see God; I myself will see him with my own eyes—I, and not another. How my heart yearns within me!” (Job 19:25-27)

So the second member of the triune God will be a human being for all eternity, and we will know him not only as God, but as man. To not only worship God, but to see God, run alongside God, eat with God, swim with God, play catch with God.... Now, that is about as stunning a truth as there is. This is not “over-familiarizing” God. Had we come up with this idea, it would be blasphemy. The incarnation, resurrection and ascension was HIS idea, not ours. I for one wouldn’t have thought of it in a million years. But I’ll still be thanking him for it in a million years, and I suspect I’ll be even more amazed about it then than I am now.