A Person and a Place: Safely Home 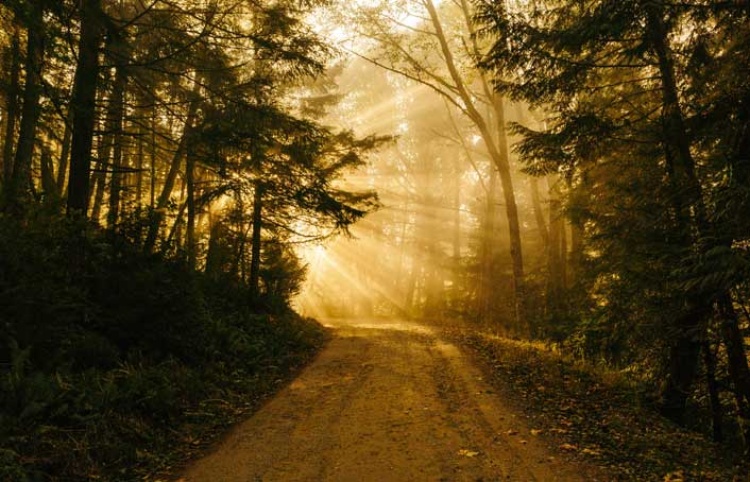 Bertrand Russell has been called the greatest mind of the twentieth century. Anticipating his death he said, “There is darkness without, and when I die there will be darkness within. There is no splendor, no vastness anywhere; only triviality for a moment, and then nothing.”

Whether or not he repented and turned to Christ before he died, Russell now knows how terribly wrong he was in thinking human beings exist only temporarily. Death is not a hole; it’s a door. We don’t end; we relocate.

Russell failed to recognize what children intuitively know. Heaven is not a fairy tale. It’s not some baseless dream. Heaven is an objective reality that exists independently of anyone’s belief or disbelief in it. Heaven is real. So real that earth, in comparison, is but the Shadowlands.

C. S. Lewis said, “There have been times when I think we do not desire heaven, but more often I find myself wondering whether, in our heart of hearts, we have ever desired anything else.... Your place in heaven will seem to be made for you and you alone, because you were made for it stitch by stitch as a glove is made for a hand.”

We long for a perfect world not just because this one isn’t but because we sense there really is one. Whether or not we realize it, we’re homesick for heaven.

In The Last Battle, when the old Narnia and the old earth are swept into the new one, the unicorn keeps urging the travelers to come “further up and further in.” You can’t exhaust heaven—you can only go in deeper to discover more and more and delight more and more in what you discover. On earth, when we find what we’ve been looking for, delight often diminishes. In heaven it’s the opposite. Delight keeps increasing—no wonder, since unlike anything on earth, what’s in heaven is what we were actually looking for all along.

Elisha asked God to give his servant a glimpse of the invisible realm. He prayed, “O LORD, open his eyes so he may see.” Then God “opened the servant’s eyes, and he looked and saw the hills full of horses and chariots of fire all around Elisha” (2 Kings 6:17).

Moses “persevered because he saw him who is invisible” (Hebrews 11:27). How can we see the invisible? (Isn’t that like hearing the inaudible?) We must meditate on what Scripture says about the spiritual realm, the real world. We must give serious thought to heaven, never imagining it isn’t real just because we can’t see it. A blind man can’t see the sun, but that doesn’t make it any less real.

The angel who showed John the wonders of heaven anticipated a “this can’t be real” response. That’s why he assured the apostle, “These words are trustworthy and true” (Revelation 22:6).

By faith we take God at His Word and believe what Scripture tells us about heaven. Then we pray, “Lord, open our eyes,” and envision it in our minds according to what Scripture says about it.

John Wesley was shown around a vast plantation by a proud landowner. They rode their horses all day and saw only a fraction of the estate. When they sat down to dinner the man said eagerly, “Well, Mr. Wesley, what do you think?” Wesley pondered the question, then replied, “I think you’re going to have a hard time leaving all this.”

Why waste your life trying to feel at home in a world that’s not your home? 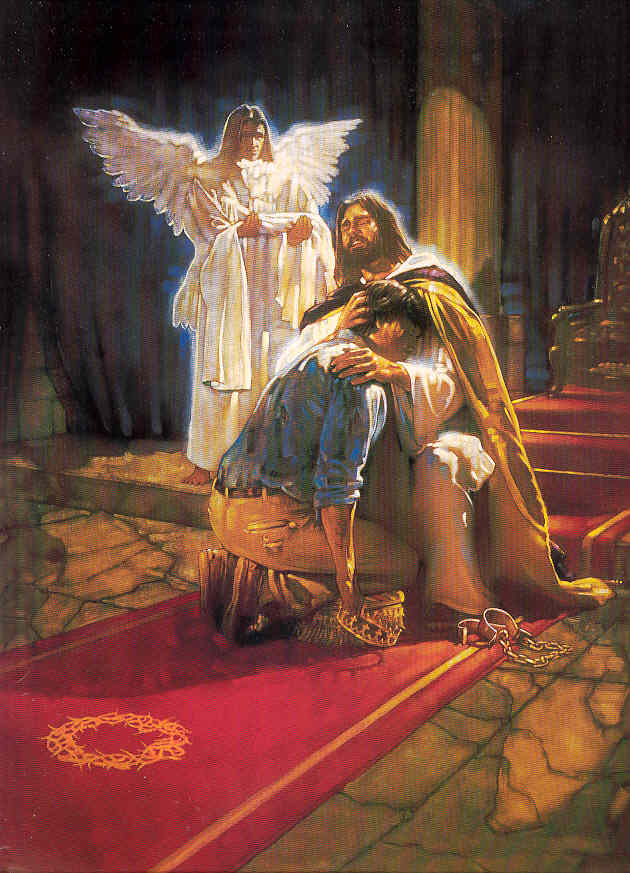 On my office wall hangs a beautiful painting by Ron DiCianni. It’s entitled Safely Home. The painting portrays a man on his knees. His clothing is worn and tattered. He’s walked down a long strip of blood-red entry-carpet that has led him to the foot of a throne.

The man’s arms dangle at his side. He appears both exhausted and relieved, overcome with emotion. His head rests on the chest of one kneeling down to him, holding him tight in a loving embrace. The one hugging him has stepped down off the throne. It’s the King, the Creator of the universe, who is also, incredibly, a man. King Jesus.

A few feet to the right are open shackles lying on the palace floor. The man had been a prisoner on earth. He’d suffered terribly at the hands of those who despised him because they despised his King. In his right hand, hanging limply to the ground, is a beautiful gold crown.

The man is a martyr. He has lived out Revelation 2:10—he’s been faithful unto death, and his Lord has given him the crown of life. To many, the single most important thing is the preservation of their life on earth. To this man, obeying his Lord was more important than prolonging his earthly life. He’s one of those who “did not love their lives so much as to shrink from death” (Revelation 12:11).

In the background of Safely Home stands an angel, reverently watching, holding out in his arms a white robe. The angel is the man’s guardian. In the stonework on both sides of the carpet walkway you can see the continents of earth below.

Several things strike me in this painting. One is heaven’s view of earth below. Another is the look on the man’s face, at long last freed from pain and persecution. But what really strikes me is the look on the face of King Jesus. He, too, is full of emotion. His face radiates compassion and approval. His nail-scarred hands, drawing the martyr to Himself, are silent testimony to the extent of His love.

The artist could have named the painting Well Done or Overcomer or No Longer a Stranger or something else. But he named it Safely Home. This man who has endured great suffering is safely home at last. The evil that pursued him in the Shadowlands can no longer touch him. He’s forever beyond its reach, for between evil and the man stands the Lord of the Cosmos, the one who embraces him and says, “Never again will I let you suffer.”

At the moment this is going on in heaven, I imagine down on earth a wife and children, perhaps a mother and father, a church of faithful believers. They’re agonizing, understandably, over what has happened to their beloved one. At the very moment they’re overwhelmed with grief, the one they mourn is overcome with joy. For he is home at last. Home for the very first time.

To many people in the Shadowlands, this man has passed from life to death. In fact, it is the opposite. He has passed from death to life. And one day his believing family will join him there. Then the King will wipe away their tears, too.

Regarding heaven, Scripture doesn’t just say, “There will be no more tears.” It says God “will wipe every tear from their eyes” (Revelation 21:4). This isn’t God snapping his fingers and drying all tears from a distance. It’s a very intimate picture—it means God’s hands will touch the face of each individual child, to remove every tear.

As Thomas Moore put it, “Earth has no sorrow that Heaven cannot heal.” Earth is heaven’s womb, and our sufferings are birth pangs.

Through His death and resurrection the Carpenter flung open the door to heaven. If you’re a Christian suffering with great pains and losses, take cheer (John 16:33). The new house is almost ready for you. Moving day’s coming. The dark winter is about to be transformed into spring. Soon you will be home.

If you’re not a Christian, you need to talk to God. Don’t procrastinate—time is shorter than you think. Confess and repent of your sin and ask His forgiveness (Romans 3:23; 1 John 1:9). Express your belief in Christ and ask Him to make you His child (John 1:12). Accept the gift of salvation He offers (Romans 6:23). The moment you do, heaven becomes your home.

Our lives on earth are a training course to get us ready for heaven. It’s not just that God is preparing a place for us. It’s that He’s preparing us for that place.

C. S. Lewis framed a great life’s goal when he said, “I must keep alive in myself the desire for my true country, which I shall not find till after death; I must never let it get snowed under or turned aside; I must make it the main object of life to press on to that other country and to help others to do the same.”

In Edge of Eternity, the King gives Nick the right perspective for life on earth: “Live each day as if it were your last day there. One of them will be.”

The King then narrows the focus:

“You have your orders—I send you to battle. You are a soldier, and I would not promise a soldier ease. I promise you difficulty, but with it resources and purpose and joy.

“Go to where men die of thirst a stone’s throw from pure water...go back as my water-bearer.”

As long as we’re still here in the parched wastelands of the present earth, God calls us to offer refreshment to a world full of people dying of thirst.

What should we offer them? Exactly what they thirst for—a person and a place.

Jesus is that person.

Heaven is that place.

From In Light of Eternity by Randy Alcorn

Photo by Patrick Fore on Unsplash