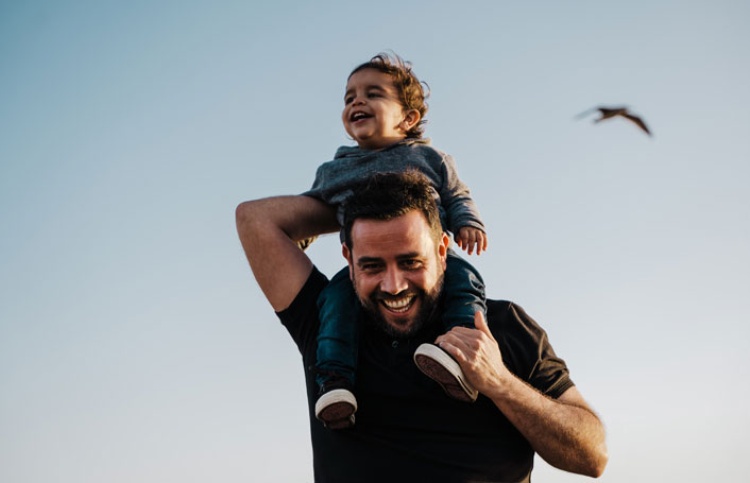 Men, you are the leaders of your families.  You might be reluctant to assume that role. You might even deny that it falls to you.  Nonetheless, you are your family’s de facto leader, whether you choose to believe it or not.

Leaders are always the highest priority targets in any war.  The enemy knows that if he can kill the commander, then the troops are easier to defeat.  Cut off the head and the body dies.  The body in this case is your family.  One way to fight back and be the leaders God created us to be is to be aware of our roles, our responsibilities, and our influence with those we lead.

You may not think of yourself as being particularly influential or even successful at life.  Maybe you don’t make a lot of money, lead a large group of people, save lives, or invent amazing gadgets.  Maybe life has even beaten you down and you’ve lost confidence in your abilities.  Consequently, you don’t think of yourself as a big deal.  But you can bet your boy (and girl) does.  He thinks you’re a very big deal.  He doesn’t know or care what the outside world thinks.  He only knows that, between the four walls of your home, you are about the biggest, wisest, most powerful person alive.  Oh, he knows that you’re not perfect.  But he doesn’t care, because you’re just good enough to be indispensable in his life.

Fathering is at the heart of masculinity, of what it means to be a man.  Godly fathers put others’ needs before their own.  If you’re like me, you spend the majority of your conscious thought and effort on satisfying your own wants and needs.  It’s almost an unconscious response to life.  But if we are to be authentic men and fathers, we need to rethink that attitude, to consciously make sacrifices so others can benefit and prosper.

When fathers neglect this duty or are absent from the home, families are attacked by predators.  Young men, such as gang members, raised without the influence of older men often become marauding wolves themselves...predators preying on women and children for their own self-gratification.

The Bible likens families to flocks of sheep.  Children, like lambs, are naive and simple in their understanding of the world.  Fathers are like sheep dogs guarding the flock from marauding wolves. We protect our families from human predators, television programs, movies, music, books, corrupt friends, or any number of people or influences that enter into a child’s life.

By the way, it’s fitting that sheep dogs come from the wolf genus, so they are no stranger to the wolves’ traits and habits.  As dads we often find the hackles rising on our necks when we sense a wolf parading in sheep’s clothing around our kids.  I once told my teenage daughter, “I might not always know why, but I know a wolf when I see one; I can sense him.”  Of course my daughter says that I think all boys are wolves, but I just tell her that’s because I used to be one.  It takes one to know one.

When I was dating, I was, like all young guys, deathly afraid of the fathers of the girls I went out with.  If the majority of fathers showed any interest in meeting the boys their daughters were dating, I suspect that nearly all young men would be forced to remain celibate until marriage.

I stopped by an apartment complex the other day to visit a young boy whose single mother had asked me to meet with.  As I pulled into the large complex, I noticed at least 35-40 kids playing in the parking lot.  The kids were of all ages, from toddlers up to teenagers.  Several of the older boys were in a group wearing gang attire, aggressively posturing, smoking pot, and swearing loudly.  A number of young ladies were hanging around them, and in their craving for masculine affection, trying to get their attention by wearing suggestive clothing. Rap music was blaring from a communal speaker for all the kids to hear, no matter how young.  The lyrics of the songs were so vulgar that they would have embarrassed the sailors on the Navy ship I was stationed on.  Yet these children played amidst this chaos as if it were a normal part of growing up.  The only adults around were a few predatory single men who skirted the perimeter of the action, looking for weakened prey.

My first thought was, “What chance do these children have of growing up to lead a normal, productive, happy and fulfilled life?”  My second thought was, “Where are the adults?  Where are all the men?”  When I spoke to the mother, I learned that there were no men around because there are no men who live there, except the few I noted earlier scanning the flock for victims.  I had just entered the realm of fatherless America.  It was a depressing place filled with despair and hopelessness.

I came by the apartment complex several weeks later, on a weekend.  Many children were again out playing, but this time four or five visiting fathers were out interacting and supervising them.  This time there were no predators lurking about, no gang attire, no drugs, no loud rap music, no half-naked girls, and no swearing.  What a difference positive male influence makes.  It was as if the sun had come out over this courtyard of children all because a few men had taken the time to be with them.

Before I became a Christian I was concerned about my fathering skills.  Fathering is a modeled behavior—we imitate what we see.  Not having had a very good role model growing up, I was not exactly sure of what to do in certain situations.  I found myself reacting instead of having a proactive game plan.  Reacting to situations often forced me to use anger instead of wisdom.  Even after I started reading books to improve my fathering skills, I was still not confident in my abilities.  The books encouraged looking for “teaching moments” to use as lessons.  I wasn’t sure what a teaching moment was, much less what to say or do when it came along.  Thus, I found myself evading or walking away from my responsibilities, thinking I was avoiding failure.  I knew my children not only expected a better father, but deserved one.  And I knew my wife was watching and evaluating my role as a father.  The prospect of losing her respect was more than I wished to endure.  But by walking away from my responsibilities, and trying to avoid failing actively, I was still failing.  I was just failing passively, which was even worse!

Many men I talk to have the same feelings of inadequacy regarding their fathering abilities.  Without the proper training and role modeling it can seem like an overwhelming responsibility.

Let me say this—you are the man God chose to be the father of your children!  God could have picked any man on earth for this task, but in His infinite wisdom He chose you.  Even if you don’t have confidence in your fathering skills, God says you fit the bill perfectly for His plan for your family.  He knows all your strengths and weaknesses, and He determined before time began that you would be the father of your children.

Does that make you feel better or just more terrified?  Relax, if you are reading this, you are seeking knowledge and wisdom on how to become a better dad.  That speaks well of your heart.  If you are sincere and persevere, God will honor that worthy desire by working in your life to grant you that wish.  I prayed many times to my Heavenly Father for wisdom in raising my children, and it feels now as though He has started honoring that request.  Slowly but surely, I found myself recognizing “teaching moments” when they occurred.  And by God’s grace, He spoke through my mouth in many of those occasions—surprising even me with the wisdom that popped out!  Once I began living a life of intentional fathering, instead of just reacting to what life threw at me, God began blessing my efforts.

Today, I love being a father.  For years, I dreaded the thought of parenting teenagers.  Now, however, I find the challenges of raising teenagers to be exhilarating—even though these years are typically the most unsatisfying for a father.  The natural curiosity teens have about life—the hormonal highs and lows, launching them into the world as productive, happy adults. Believe it or not, I find all of these to be fun, though challenging, and I find great satisfaction when God gives me the wisdom to address these needs.

He can give you the same fulfillment in your family.  Keeping a good attitude is half the battle.

Believe me when I say I know how tough it is being a man and a father today.  It feels like you give and work and struggle, and there’s never enough of you to go around.  The pressures are unrelenting.  And yet, you are so important that you are nearly irreplaceable in the lives of your children—especially your sons.  Fatherhood is a privilege given by God, and with that privilege comes the power to impact lives.  Exercised responsibly for good, that power can lead to God’s blessing on you and your family.   Privilege, power, responsibility, sacrifice. They’re all part of the same package. They all belong to a father.

Be a man.  Stand tall.  Give your son an example of masculinity that will survive down through the generations.  I’ve heard men speak in reverent tones of their grandfathers or even great-grandfathers they’ve never met.  The power of the masculine legacy they left behind has cured and hardened down through the ages like a concrete foundation of manliness.  Your kids are counting on you to provide that foundation for them and their future children.

This article is excerpted from Rick Johnson’s book, Better Dads, Stronger Sons—How Fathers Can Guide Boys to Become Men of Character.  Rick is the founder of Better Dads, a fathering skills program designed to inspire and equip men to be more engaged in the lives of their children.  To find out more about his ministry, go to www.betterdads.net

Photo by Josue Michel on Unsplash

Courageous: Randy Alcorn Talks About His Book Project with the Kendrick Brothers

video April 1, 2011
In this video clip, Randy Alcorn talks with Ron Blue about his book Courageous with the Kendrick brothers.
Invest in Eternity