Where Did You Get the Ideas for the "Chair of Honor" and the Reverence for the Bible Box in Safely Home? 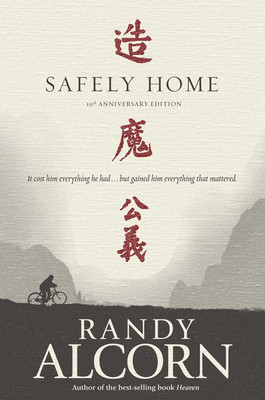 I know that Safely Home is a work of fiction though some aspects of the life of the persecuted church in China are true. I’m wondering if the “chair of honor” and Li Quan’s wife’s deep reverence for the box the Bibles came in, though, were based on some family’s real experience.

The box was based upon an experience a friend of mine had in Moscow back in 1990 where they were passing out free Bibles to people. They had run out of Bibles and a man saw one of the empty boxes and asked if he could have it. Even though he couldn’t have a Bible he wanted to have the box because it had held the Word of God.

The chair was something I made up. I suppose I got the idea from the empty chair of the Passover seder, the “chair of Elijah.” It symbolizes the wait for the return of the prophet Elijah, who will come back and prepare people for the coming of Messiah.

There have been times when I’ve prayed, “Lord, I just want to sense your presence.” I have gotten down on my knees with a chair in front of me and said, “Lord, You are just as present as if You were physically sitting in this chair. You used to sit in chairs. As a carpenter, You used to make chairs!” (I’m not creating an idol or saying He really is physically sitting on that chair—He’s not. But I’m saying He’s there and every bit as real as if He were sitting in that chair.) I say, “Help me sense your presence as I pray to You right now.” I visualize Christ sitting in that chair and look to Him and talk to Him. And again, that’s not idolatry because Jesus did really become a man—He’s the God-Man. We don’t know exactly what His body looked like, but He had a body and now has a resurrection body which He’ll have forever.

I’m not pretending Jesus is with me when I pray; I simply believe His promise that He really is with me and I act in keeping with it. (If you want to be happy, put meaning to the sometimes empty phrase “spending time with God”!)