Best-selling author Randy Alcorn tackles the topic of suffering in his new book, If God Is Good. He attempts to explain why God, if He is indeed good, allows people to suffer. Understandably, Alcorn takes his time to dig deeply into the subject, delivering a book of more than 500 pages. We recently spoke with the author, who also directs Eternal Perspective Ministries, about his view of suffering and what the subject reveals about God.

Does the existence of suffering and evil prove there is no God?

The central question is, Why would an all-good, all-powerful and all-knowing God create a world that would become full of evil and suffering? Atheists answer the question easily: He wouldn’t, and therefore there is no God. Scott and Janet Willis, a pastor and his wife, lost six children in a van wreck. The Willis family’s story is exactly the kind that atheists tend to feature as overwhelming evidence for God’s non-existence. Yet when I interviewed this couple in 2008, 14 years after the tragic event, Janet said, “Today I have a far greater understanding of the goodness of God than I did before the accident.” This might have taken my breath away had I not already heard it from others who’ve also endured unspeakable suffering. At the end of our two-hour conversation, Scott Willis said, “I have a stronger view of God’s sovereignty than ever before.

How did you attempt to put a unique perspective on this age-old question?

One way is by switching the question, so that at it’s not so much, “Why does God allow evil?” as much as “How long is God going to allow evil to go on?” God has good reasons for letting things go on as long as He has. If He judged all evil right now, those crying out for justice would themselves be condemned. He delays judgment to give more people more time to repent and come to know Him, and for those who do know Him, to become more conformed to the image of Christ, thereby glorifying God and increasing their capacity for eternal joy.

Another question often left out of the discussion is what I’m calling the “problem of goodness.” Unbelievers and believers have the same heart cry in response to evil and suffering: “Something’s terribly wrong.” We know we were made for something far better. But our heart cry itself is revealing—why do we expect more or hope for more? Why are we outraged by evil and suffering? If the atheists are right, it’s no more than we should expect in a world of random chance and survival of the fittest. Where do we get the standard of goodness by which we judge evil to be evil?

In this book I appeal to unbelievers and believers alike to consider, why is there so much good in the world? Why do the great majority of suffering people want to go on living nonetheless?

Why did you decide to tackle this question now?

I wrote If God Is Good partly because am deeply concerned by the radically unbiblical viewpoints being assimilated into the thinking of evangelical Christians. I wrote four chapters critiquing the attempts of misguided theologians (including open theists) to resolve the problem of evil by minimizing the divine attributes of omnipotence, omniscience, goodness or love. Once we start tinkering with God’s attributes to solve a problem, the problems we create are far worse.

Another reason is that countless people have already read, and will be reading for years, the New York Times best-selling books by atheists Sam Harris, Richard Dawkins and Christopher Hitchens. I want to reach people who don’t know how to respond to their arguments, as well as those whose non-Christian friends have been influenced by this reasoning.

I devoted an entire chapter to Bart Ehrman’s God’s Problem, a major best-seller written by a “former Christian,” a graduate of Moody, Wheaton and Princeton. He’s a religion professor who has completely abandoned his Christian faith, all because of the problem of evil. Ehrman represents an entire category of people raised in the context of the church who, due to their classes in college and their observation of the world and their own experiences with suffering, now deny the Christian faith.

Some professing Christians will read the book who are being set up to jettison their weak faiths by college professors utilizing Ehrman’s kinds of arguments. My prayer is that they will see the spiritual power and reason of Scripture, learn sound theology, and develop a truly Christian worldview to replace their superficial one that will never survive either the arguments or the tests that await them.

Ultimately what drew me to this issue is that the Bible itself (e.g., in Job and Psalms and the prophets) repeatedly raises the problem of evil. It does so with a full range of insight and mystery. It doesn’t offer easy or simplistic bullet-point answers but offers more satisfying answers than any other worldview. Those answers are centered in the person and work of Jesus Christ. In eternity, I could see Him looking at His children, stretching out His nail-scarred hands, and asking us, in light of the questions we struggled with, “Do these look like the hands of a God who did not care?” 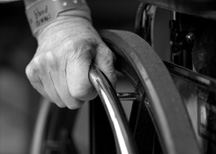 Do you have any real-life examples that help prove this argument?

When you read as many books as I do, you’re bound to come across some great stories, and I told a number of them in the book. These include great missionary stories. I also spent considerable time interviewing people.

I share two stories told me by my friend Steve Saint that are very powerful and stories from others who have endured personal tragedies and lifelong suffering, including my friend David O’Brien. Born with extensive cerebral palsy, unable to walk until age 7, and only haltingly then, often falling throughout his life, David is now confined to a wheelchair. He talks in grunts and he drools. He’s a brilliant man trapped for a lifetime in a body that doesn’t work right. Yet he’s full of praise for God as we talked about suffering. He said, “God made me this way to keep me close to Him.”

What are some ways that we can counsel and console family and friends who are going through suffering?

There is a time for silence, to just sit and listen and weep with those who weep.

When someone in pain expresses raw emotions, we shouldn’t scold them. When the premature and misguided correction of Job’s friends hurt Job, they didn’t have sense enough to say, “I’m sorry,” and then shut up. So Job said to them, “Miserable comforters are you all!” (16:2).

Darrell Scott told me that after his daughter Rachel was murdered at Columbine, people often quoted Romans 8:28 to him. He wasn’t ready to hear it. How sad that such a powerful verse, cited carelessly or prematurely, becomes a source of pain when it should offer great comfort. Think of God’s truths like tools. Don’t use a hammer when you need a wrench. And don’t use either when you need to give someone a hug, a blanket, or a meal-or just weep with them.

Job candidly expressed his doubts as he questioned God about his suffering: “I will complain in the bitterness of my soul. ... I despise my life. ... If I have sinned, what have I done to you, O watcher of men? Why have you made me your target? Have I become a burden to you?” (See Job 7.)

Just as God knew exactly how Job felt before he said a word, so God knows how you feel and what you’re thinking. When you pretend you don’t feel hurt or angry or devastated, you’re not fooling God. Be honest! Don’t misunderstand; I am not encouraging you to be angry at God or to blame Him—He deserves no blame—but to honestly confess your feelings.

If God Is Good doesn’t just address the logical problem of evil, but also the emotional one. I wrote the book not only for the head, but the heart. God hears the desires of the afflicted and promises to listen to them and strengthen their hearts.

One day, evil will end—forever. Suffering and weeping are real and profound, but for God’s children, they are temporary. Eternal joy is on its way.

Do the themes in this book tie in with the themes from your book Heaven?

Absolutely. Emphasizing Heaven is critical, because to get perspective we must not fixate on the sufferings of this present time, but the glory that is to come. Unless we keep our eyes on the big picture, including the plan of God in His original creation, in the redemptive work of Christ, and the ultimate resolution to evil in the return of Christ and the New Earth, we will get lost in the abyss of the present. We must see these light and momentary afflictions will be replaced with an eternal glory that far outweighs them all (2 Cor. 4:17).