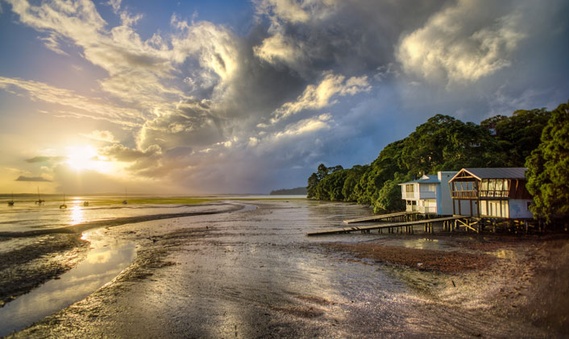 God’s people are described as aliens and strangers, looking for a country of their own (Hebrews 11:14). This world, under the curse, is not our home. In fact, our real home is a place we’ve never lived.

When I ride my bike through my old neighborhood (not far from where I now live), a fond familiarity washes over me. The hills, the houses, the fences and fields, the schoolyard where I played ball. When I gaze at the house I grew up in, it reverberates with memories of my father, mother, brother, friends, dogs, cats, frogs, and lizards, and the soldiers and aliens I fought in those overgrown fields.

A place with loved ones—that’s a central quality of home. The hominess of the house I live in now is inseparable from my wife, Nanci, and my daughters, Karina and Angela, who are married and have their own homes but often come to visit. We have four grandsons we love having with us here. We have rich memories of extended family and friends who’ve been here, some now living with Jesus. Home is where we’re with the ones we love—eating and drinking and playing and laughing and telling stories.

Heaven will be like that. Scripture often speaks of banquets and feasts in Heaven. We’ll be with people we love, and we’ll love no one more than Jesus, who purchased with His own blood the real estate of the New Earth. Because we’ve already lived on Earth, I think it will seem from the first that we’re coming home; the New Earth will strike us as familiar, because it will be the old Earth raised, as our bodies will be our old bodies raised. The New Earth will be the home we’ve always longed for.

Home is a place where we fit right in. It’s the place we were made for. Most houses we live in on Earth weren’t really made just for us. But the New Earth will be (John 14:2).

When Nanci was pregnant with each of our girls, she and I prepared a place for them. We decorated the room, selected the wallpaper, set up the crib just so. The quality of the place we prepared for our daughters was limited only by our skills, resources, and imagination. In Heaven, what kind of a place can we expect our Lord to have prepared for us? Because He isn’t limited, and He loves us even more than we love our children, we can expect to find the best place ever made. The God who commends hospitality will not be outdone in His hospitality to us.

A good carpenter envisions what he wants to build. He plans and designs. Then he does his work, skillfully fashioning it to exact specifications. He takes pride in his work and delights in showing it to others. And when he makes something for his bride or his children, he takes special care and delight.

Jesus is the carpenter from Nazareth. He knows how to build. He’s had experience building entire worlds, billions of them, throughout the universe. He’s also an expert at repairing what has been damaged—whether people or worlds (Revelation 21:3, 4). He doesn’t consider His creation disposable. As Romans 8 tells us, this damaged universe cries out to be repaired, and it is His plan to repair it as well as us. He’s going to remodel the old Earth on a grand scale.

God promises He will come down and dwell upon that new world with us. Christ will sit on His throne in the New Jerusalem, capital city of the capital planet of the New Universe. How great will be that resurrected world God calls the New Earth. And the greatest part will be that it won’t just be our home. It will be.

Photo by Jasper Boer on Unsplash