The Face of God

Recently reunited with my husband who had just returned after abandoning me for eight months with no intent to return, I believed that the Lord truly did desire to restore unto us “the years the locusts have eaten.” Trust was an issue, of course, but I desired more than anything a strong marriage that would one day be a beautiful testimony to other struggling newlyweds.

Because my husband had a history of infidelity, I was hesitant to be intimate. However, I very much wanted to abide by the word of God and the urging not to withhold from my husband. We agreed to use protection for an indefinite amount of time to protect us from having a child while our marriage was so desperately in need of strengthening, but also to protect me from any consequences resulting from his choices and lifestyle when he was “away.” Soon after returning home, my husband again turned cold and distant among other attitudes. The distance between us made it exceptionally difficult for me to have any intimacy at all with him physically, though I longed for intimacy with him spiritually and emotionally. Twice, he forced himself on me, and my urgings to use protection were dismissed.

Driving home from work one day, I had an inkling—what I believe was a prompting from the Lord—that I needed to take a pregnancy test. I spoke with my husband who at the time appeared to be thrilled with the thought of expecting another child, and who also stated he was convinced the results would be positive if I took a pregnancy test. I was surprised when the test showed two pink lines. He was ecstatic. His ecstasy lasted just that day.

We went six weeks without having a meaningful conversation or even talking to each other for more than a minute at a time. I was lonely, and he was very angry. When he did speak, he would demand an abortion and vehemently declare that the baby in my womb was a horrible mistake. I refused to have an abortion and made that absolutely clear. I was scared and agreed that the timing in our marriage was not the best for this little one, but I was hopeful, too. I lost my job which was also very scary because I was the primary provider for our family. My pride was also crushed by being forced to resign. Not being able to reach my husband one day (as he was not at work as he said he would be) I asked him if he was being unfaithful. I told him if he was, he needed to leave—and if he was not, we definitely needed to take more pro-active measures in our marriage. He went into our bedroom, packed a box with one pair of socks, one pair of underwear, a belt and a watch, placed my spare car key and his house key on the kitchen island, walked out the door, and drove away. He never came back.

Suddenly I was a single mother all over again, but this time I was expecting another child and not working; I had no income. Two days after he left, I had my 20-week check up for my baby. During the ultrasound, the technician confirmed for me that the baby was a girl. Later, she started to cry. I thought she was having a bad day. I asked if anything was wrong. She shook her head and said that the doctor would talk to me if he had any concerns, but encouraged me that she did not see anything that should warrant me worrying. I wondered why she was crying. She took more pictures, and finally she was done. I waited and waited, ruminating over why she was crying. All of a sudden, the door abruptly opened.

Two people stood in front of me—a petite lady wearing a white coat that said GENETICIST on its lapel and a doctor whom I didn’t regularly see. There was silence, but as I read her job title, my lips wavered, my body shook, and eventually tears welled up in my eyes and spilled out onto my face in an unstoppable flow. I tried to speak and finally managed to get up and follow as the doctor told the geneticist to lead me to her office and speak privately with me there. The geneticist advised me that she and the doctor had reviewed my ultrasound results and had cause to believe that my baby had Trisomy 18, a genetic disorder in which an individual has an extra 18th chromosome, characterized by mental retardation, abnormal skull shape, malformed ears, and cardiac defects; the condition is usually fatal within several weeks or months of birth. I was absolutely crushed when offered early termination. When I refused, she offered me contacts that would help with grief (as I was expected to lose the baby by 24 weeks), state assistance to pay for a funeral and medical costs, and social workers who could help me prepare to care for a special needs child should the baby be born early. The doctor and the geneticist both also informed me that the baby did not have a face. When I asked if I could have another ultrasound in two weeks as a second opinion, I was told, “Your baby won’t grow a face in two weeks. If it doesn’t have a face today, it won’t have a face...ever.” There was also concern that the baby did not have a left heart ventricle.

I chose to HOPE that the Lord would comfort me in losing my baby; that he would sustain me through grief; that he would empower me to care for a baby born with Trisomy 18; that he would equip me in caring for a child without a face or heart ventricle, based on 1 Corinthians 2:5 which says, “...that your faith might not rest in the wisdom of men but in the power of God.” I made a quick decision to trust the LORD. I also immediately determined to name this little one to help me bond with her and pray for her specifically. I chose to share this news with very select few; immediate family, my small group at church, and a few close personal friends who have proven to be committed prayer warriors.

From 20 weeks until the day my baby was born, I had five additional ultrasounds. I finally decided to have an amniocentesis done around 25 weeks because I wanted to know for sure if she had Trisomy 18. The results came back—and genetically, she did not have a disorder. Praise the Lord. However, each ultrasound resulted in the same concerns. Baby will not have a face. Baby does not appear to have two heart ventricles, only one. Caesarean section was scheduled. Prior to surgery, another ultrasound was performed and my parents, my sister, and I each secretly and privately fretted over that picture. My baby truly did not appear to have any facial structure—there was a big hole where her mouth and nose should be. 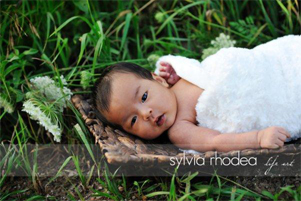 I am richer and blessed beyond measure because I chose life. My daughter is three months old today and absolutely beautiful and bright. I do not believe that the doctors were wrong. Rather, I believe that GOD answered my prayers. I named my daughter Abigael after Abigail in the Old Testament. She was described as being wise and beautiful. My daughter has physical beauty I was told she would undeniably NEVER have. Abigael’s middle name is Analysse. The meaning of this name is “the oath and grace of God.” She is living proof of God and his grace and that his word NEVER returns to him empty. Now, when I look at my sweet, precious Abigael, not only do I see a face, a miracle, an answer to prayer—I see the face of God. 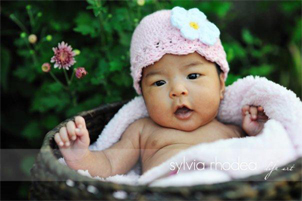 What if I had been defeated by my circumstances? I was a young woman responsible already for a toddler, abandoned by her husband, without work or income, riddled with life-threatening health issues receiving even more devastating news about her baby! I was offered termination “for the baby’s sake” and for my own sake; repeatedly reminded by medical staff that I was “alone.” I could have easily chosen to forego the trial and quickly “free” myself from health worries and great responsibility and suffering. What if I had? What if I did not have faith that the Lord would answer my prayer to equip me and help me? I know the answer. If I had, I would be void of knowing the truth that nothing is impossible for my God. I would not know just how precious life really is. 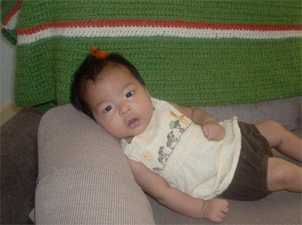 I clung to Scripture verse after Scripture verse to get me through my pregnancy after being told to expect such tragedy and through my broken marriage, job loss, and the demands of being a single mother. Besides 1 Corinthians 2:5, I also clung to Ephesians 3:20 and Philippians 4:13. I trust science; I believe in GOD. I choose LIFE and the continual sanctification by truth; His WORD is truth (John 17:17) I chose to trust in God, rather than man who can so quickly abandon that which he professes to love. I chose to HOPE in the reality and outcome of things I have no control over and cannot see—I chose life—and God chose, in return, to bless me! And now in return, instead of giving me a beautiful and inspiring testimony through my marriage, he has given me a beautiful daughter to hold and cherish and PROVED himself to me in the most amazing way. He has given me a completely new inspiration and testimony—one I hope can be used to save lives.

Perhaps you, yourself, can see the face of God in your own baby—after all, she will be made in His image. I can promise you that!

Will We See God's Face?

video June 28, 2013
Yes. Scripture says that we will see God's face. But what does that actually mean? Randy Alcorn elaborates on this answer. This video clip was excerpted from Randy's Eternity 101 DVD class.
Invest in Eternity