How Should Christian Writers Respond When People Dislike Their Books?

Regarding readers or reviewers who don’t like my books, when I conclude that some people think worse of me than they should, I always remind myself that some think better of me than they should. The court of human opinion—lacking some critical qualifications for judgment, including omniscience—being equally wrong on both sides, evens out. But even if it didn’t, as much as audience analysis has a place and of course we should write with our readers in mind, still we ultimately stand before the Audience of One—and that audience is NOT our readers or reviewers...neither those who love what we do, nor those who hate what we do. “Whatever you do, work at it with all your heart, as working for the Lord, not for men, since you know that you will receive an inheritance from the Lord as a reward. It is the Lord Christ you are serving” (Colossians 3:23-24).

The sometimes terrifying, but other times very relieving thing about having only one Judge is that He knows us inside out and therefore is impossible to fool. So why worry about how we look? We can put on a face or erudition or humility or big-heartedness and possibly fake people out, but it’s ridiculous to try to fake out God. So no reason to exhaust yourself trying. What a relief—why not be yourself, admitting who you are to the only one you can’t hide anything from? Character is who we really are, in the dark, where no one but God sees us. And it’s not a pretty sight. (I find it tremendously liberating to admit that Scripture is right when it declares my depravity and the deceitfulness of my heart—when I grasp that, I don’t have to spend my life trying to prove I’m really what I should be, since in fact I am NOT.)

Yet the only one who’s REALLY seen us at our very worst is the one who loves us and died for us, in order to one day free us from sin in all its forms, and thereby free us from ourselves. To be delivered not just from Satan and from the world, but to be delivered from myself...that’s a day worth anticipating.

So meanwhile, though the insults we encounter pale in comparison to his, we can follow Christ’s example: “When they hurled their insults at him, he did not retaliate; when he suffered, he made no threats. Instead, he entrusted himself to him who judges justly” (1 Peter 2:23). He knew who his true judge was-and it wasn’t the self-proclaimed judges who surrounded him.

So when a reader responds to our books with gushing praise we can give God the glory, because we know we’re not capable of pulling that off, and it is so humbling to think the great God of the universe actually used me to write words that touched someone’s life. Wow! (And we should quickly remind ourselves that they aren’t our Judge, but a righteous holy God with far higher standards who actually knows our hearts and lives, unlike our fans.) On the other hand, when a reader responds to our books by telling us we’re jerks and idiots, we can say, “You don’t know the half of it!” (And then with relief we can remind ourselves we won’t stand before our critics’ judgment seat, but that of a God who is far more merciful and kind.) So in a strange sort of way I smile at “you are a bad writer,” and remember Christ’s words, “Apart from Me you can do nothing.” If I got what I deserved I get Hell—in that light, somebody not liking me or my books is really an incredibly small thing. The real miracle is that I’m going to Heaven, and that Jesus sometimes, or even occasionally, uses my words to change lives. That’s the jaw-dropping shocker. When we think we deserve something, we’re never grateful when we get it and we’re always bitter when we don’t. When we realize we don’t deserve something (not only Heaven, but the air we breathe, for example), we’re profoundly grateful for all God gives us. 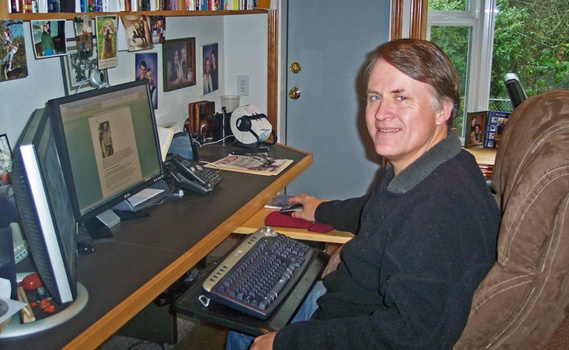 article August 18, 2010
I heard one author say, “Writing is like giving birth to barbed wire.” Others say writing is 5 percent inspiration and 95 percent perspiration.
Invest in Eternity