What Are the Languages of the Beast and the Warrior of Light in The Chasm?

In The Chasm, the beast and the warrior of light both cry out in strange languages. The beast screams, “Baal jezeb ashnar mordol nuhl—keez gimbus molech nar­gul dazg!” The warrior of light cries, “Elyon miriel o aeron galad—chara domina beth charis o aleathes celebron!”  What are the languages, and what do the words mean?

You may recognize the word “Elyon”, which I use in my other novels in reference to God. The name or title “Elyon” emphasizes God’s uniqueness and his supremacy above all others. It reminds us he is the Creator of Heaven and earth and the Owner of all. He is not merely mighty, but Almighty. He is the Sovereign Possessor and Controller of all things.

Learn more about the Hebrew word Elyon at http://www.epm.org/resources/2010/Jan/12/elyon-what-does-it-mean/

The Chasm: A Note from the Author

The Chasm is an otherworldly tale with an allegorical feel; a vibrant mix of movement, action, revelation, and reflection that follows  the journey of one man who represents everyman. His struggle is universal.

What Does The Chasm Represent?

In this two-minute audio clip, Randy Alcorn digs deeper into his book The Chasm for readers and shares about the symbolic meaning of the chasm portrayed in the story. 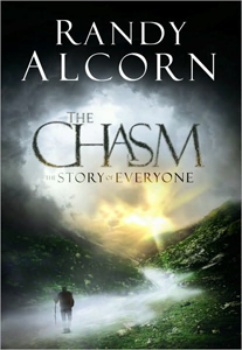 Readers' Responses to The Chasm