The Chasm: A Look at the Art 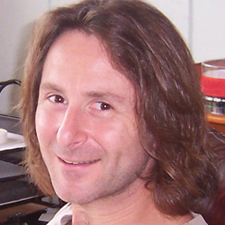 The Chasm is Randy’s first fine-line illustrated novel, and artist Mike Biegel did a great job bringing the story to life through his drawings. (You can view more of Mike’s artwork at his website, www.mikebiegel.com. He also creates illustrated holiday cards, available at www.holidaycardsonline.com.)

What follows is a glimpse into some of Randy’s interaction with Mike during the art’s creation and with Kristopher Orr, art director at WaterBrook Multnomah Publishing Group.

The illustration in chapter 5 of the book portrays the gaping, vast, and unending chasm that separates traveler Nick Seagrave from reaching Charis, the city of light. Creating an illustration that helps the reader understand Nick’s utter despair and inability to reach the city was particularly challenging. 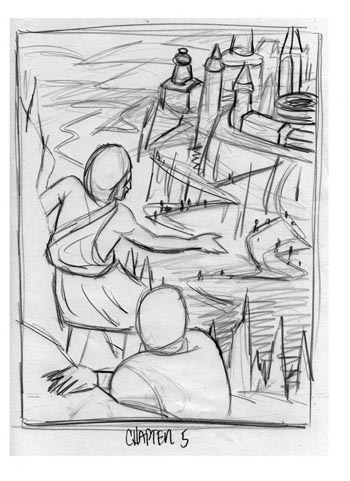 Randy’s feedback: Mike, very nice, with just one main concern. The chasm needs to be dominant, emphasizing the dead end of all roads at the chasm and the hopelessness of any discernable way to get to the great city. I think of all scenes in the book, this one cries out for a two page spread. But if that can’t be done, it forces you to somehow capture a distinctly horizontal wide angle scene in the vertical format. Yikes!!! Glad this is your job, not mine.

Kristopher’s feedback: Could we make the chasm much broader? And the city smaller? 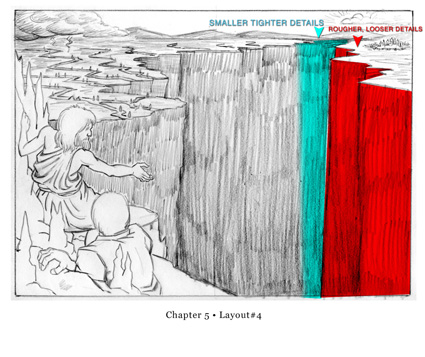 Randy: In this depiction, which is BEAUTIFULLY done by the way, my concern is that the contiguous mountains in the distance communicate that the chasm must actually end. Couldn’t you travel to the mountains and cross over them, then come back down south to the city? One thing that I am sure of is that a huge and hopelessly uncrossable gap must be clearly apparent as far as the eye can see. There should not be the slightest hope of a crossing.

Mike: Kris and Randy: Check out the attached versions. I await input. 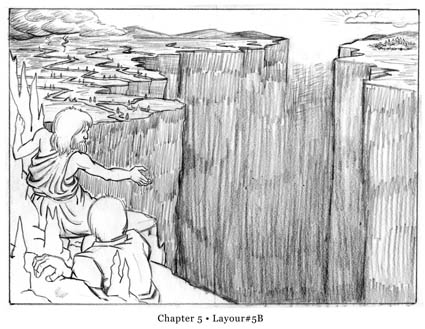 Randy: It appears that the land on the left side of chasm juts out so far toward the land on the right side that it seems a bridge could be built or you could invent a contraption to fly over. If the gap in the far distant horizon could be maybe twice as big as it is now, it would greatly diminish any remaining sense that the chasm could be bridged.

Mike, you have done an extraordinary job in this process. Thank you for being unbelievably open to input in this process. I would gladly recommend you to anyone, and will. And thanks to you, Kristopher, for your fine work as well.

Kristopher: Randy, if we can open up the distance between the sides of the chasm on the horizon line to be another inch, you’d be pleased, right?

Randy: Yes, I think that would do it. 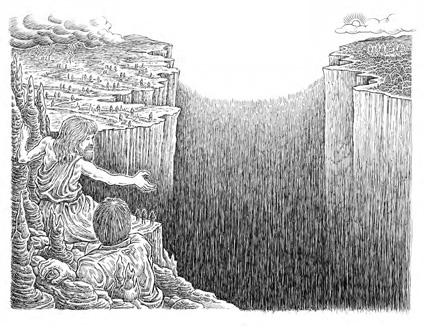 Mike: I tripled the size of the gap.

Kristopher: Dude, Mike! This is great! …there is an otherworldly feel to this that works really well with the story. Randy, what do you think?

Randy: I love it. Very happy with the wide chasm, using the double spread to emphasize its breadth. Exactly what I’d hoped for, just what the book needs. Bravo, Mike. Nice job! Thanks again for working so hard and long on this!

What Encouraged You to Include Illustrations in The Chasm? What Did You Hope to Gain from Them?

article April 13, 2011
I really felt that The Chasm could be enhanced with the illustrations. I searched around for different potential illustrators and finally found Mike Biegel. It was the right fit. I wanted that contemporary feel that is sort of a graphic-novel-sketch approach. I think Mike nailed what I was looking for and it definitely enhances the book. The illustrations allow you to grasp the heavy imagery in The Chasm. It amazed me how much work Mike was willing to put into them. I'd recommend him as an artist any day!

The Chasm: A Note from the Author

article March 16, 2011
The Chasm is an otherworldly tale with an allegorical feel; a vibrant mix of movement, action, revelation, and reflection that follows  the journey of one man who represents everyman. His struggle is universal.

What Do You Want The Chasm to Convey?

audio March 15, 2011
In this audio clip, Randy Alcorn answers the question, "What do you want The Chasm to convey?
Invest in Eternity