They will neither harm nor destroy on all my holy mountain, for the earth will be full of the knowledge of the Lord as the waters cover the sea. In that day the Root of Jesse will stand as a banner for the peoples; the nations will rally to him, and his place of rest will be glorious. —Isaiah 11:9-10

Heaven, as the eternal home of the divine Man and of all the redeemed members of the human race, must necessarily be thoroughly human in its structure, conditions, and activities. [1] —A. A. Hodge

In reference to Earth under the Curse, God says, “The glory of the Lord fills the whole earth” (Numbers 14:21). But the universe will behold an even greater display of God’s glory, one that will involve redeemed men and women and redeemed nations on a redeemed Earth. It is on Earth, God promises, that “the glory of the Lord will be revealed, and all mankind together will see it” (Isaiah 40:5). That God will be glorified on Earth is central to innumerable biblical prophecies, including the following:

“Surely his salvation is near those who fear him, that his glory may dwell in our land” (Psalm 85:9).

In both passages, the word translated “land” (erets) is the word for “earth.” Ezekiel saw God’s glory at the gates of Jerusalem—manifested not in some immaterial realm but on the earth.

Many passages also promise that God’s glory will be manifested to all the nations of the earth, particularly in the New Jerusalem:

“The nations will fear the name of the Lord, all the kings of the earth will revere your glory. For the Lord will rebuild Zion and appear in his glory” (Psalm 102:15-16).

“ ‘They will proclaim my glory among the nations. And they will bring all your brothers, from all the nations, to my holy mountain in Jerusalem as an offering to the Lord—on horses, in chariots and wagons, and on mules and camels,’ says the Lord” (Isaiah 66:19-20).

Both Isaiah and John, using similar language, declare that on the New Earth “the kings of the earth will bring their splendor into” the New Jerusalem and “the glory and honor of the nations will be brought into it” (Revelation 21:24, 26; cf. Isaiah 60:3, 5).

In his excellent treatment of Isaiah and the New Jerusalem, When the Kings Come Marching In, Richard Mouw points out that the same ships of Tarshish and trees of Lebanon mentioned in Isaiah 60 are regarded elsewhere as objects of human pride that God promises to bring down (Isaiah 2:12-13, 16-18).

Isaiah speaks of a day of judgment in which “men will flee to caves in the rocks and to holes in the ground from dread of the Lord and the splendor of his majesty, when he rises to shake the earth” (2:19). This language is strongly evocative of the depiction of God’s end times judgment, in which men try to hide “in caves and among the rocks of the mountains” (Revelation 6:15).

In Isaiah 10:34, the prophet tells us that God “will cut down the forest thickets with an ax; Lebanon will fall before the Mighty One.” Because people put their pride and hope in “their” forests and ships, God will demonstrate his superiority by bringing down the forests and sinking the ships.

Now, if the trees of Lebanon and ships of  Tarshish are singled out as being destroyed in God’s future judgment, how can they, as Isaiah 60 indicates, turn up again in the Holy City as instruments of service to the Lord?

This is an example of a scriptural paradox in which the Bible simultaneously teaches about both destruction and renewal. Items that are now used for prideful and even idolatrous purposes will be used to the glory of God when the hearts of mankind are transformed and creation itself is renewed. There is nothing inherently wrong with ships, lumber, gold, or camels. What God will destroy in his judgment is the idolatrous misuse of these good things. Then, having destroyed our perversions of his good gifts, he will, in his re-creation of the earth, restore these things as good and useful tools for his glory.

Theologian A. A. Hodge said it beautifully:

Heaven, as the eternal home of the divine Man and of all the redeemed members of the human race, must necessarily be thoroughly human in its structure, conditions, and activities. Its joys and activities must all be rational, moral, emotional, voluntary and active. There must be the exercise of all the faculties, the gratification of all tastes, the development of all talent capacities, the realization of all ideals. . . . Heaven will prove the consummate flower and fruit of the whole creation and of all the history of the universe. [2]

Isn’t that kind of Heaven a place you’d want to live in forever?

Father, thank you for the prophets who spoke through the crises and clouds of their day, seeing, with moments of clarity, the world you intend to shape from the ruins of this one. Their vision of a holy city, a holy country, a holy culture, and a holy Earth reverberate with hope and anticipation. Thank you that you will achieve Heaven on Earth, though we ourselves cannot. Earthly things that you created and that we turned into idols will be returned to their intended use: to glorify you forever. What a joy it will be to participate with you in a Kingdom that will never die, never be corrupted, and never disappoint.

Excerpt from 50 Days of Heaven by Randy Alcorn, Day 19 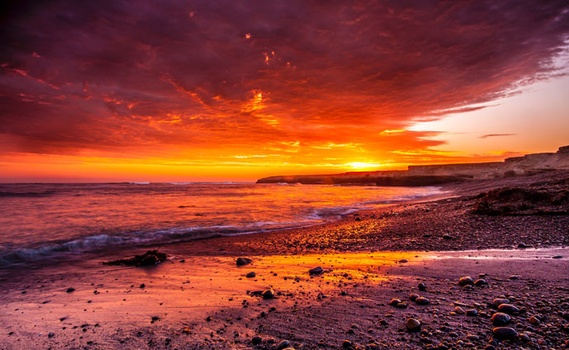