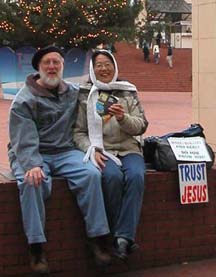 Thirty years ago, Ron Rohman began preaching in front of the old Pioneer Courthouse at SW Fifth and Morrison streets in downtown Portland, Oregon. Now that their children are grown, his wife Karen (pictured here with Ron) has joined him in his ministry, which they call intercessory evangelism. Today they witness together in Pioneer Courthouse Square, the "Living Room" of Portland.

When I first met Ron twenty-one years ago I wasn't sure what to think of him. Within a year or two, I became sure. I love this brother and his wife, and I thank God for the faithful ministry of Ron and Karen, patiently and cheerfully telling the gospel truth to some who are interested and others who scorn them, including (sadly) some Christians who don't think "street preaching" or confrontive evangelism is cool. (D. L. Moody, when criticized for his evangelism methods once said, "I like the way I do it better than the way you don't do it.")

"We simply argue that the cross be raised again, at the center of the market place as well as on the church building," Ron and Karen Rohman write. "We are recovering the claim that Jesus was not crucified in a cathedral between two candles, but on a cross between two thieves, on the town garbage heap, on crossroads so cosmopolitan that they had to write His title in Hebrew, Latin, and Greek—at the kind of place where cynics talk smut, thieves curse, and soldiers gamble, because that is where He died, and that is what He died about, and that is what followers of Jesus should be about."

This e-mail from Ron and Karen about one of their experiences is a great example of their faithfulness in living out the fruit of the Spirit and drawing others to Him. 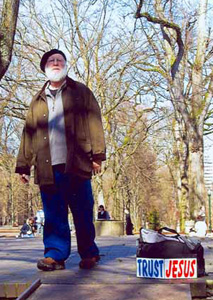 A certain young man in his mid-twenties has come by our corner at SW Sixth and Morrison at the Square for the past few years. He will grab a tract out of Ron’s hand and then stop and tear it up and throw it on the ground. He usually does this so quickly that we don’t even see him coming.

Well, last week he came by with his girlfriend and grabbed the tract and stopped and then asked Ron, “You know what I am going to do with this don’t you?” Upon recognizing him Ron said, “You are going to tear it up and throw it down.” He then said that he wasn’t going to do that this time, as he gave the calendar card back to Ron. Something had changed in him. He apologized for his behavior over the past few years, saying that his attitude had been wrong. He talked about being treated the way he treated others and that he was working on change. He then went on to talk at length with Ron about his beliefs and how they were changing.

Now while he was talking with Ron, his younger girlfriend was talking with Karen and said that she had grown up in a Baptist church and had received Jesus during that time. This gave Karen plenty of time to listen to her story and to share the love of Jesus with her from a relational point of view instead of a religious one.

After about twenty minutes had passed, the young man and his girlfriend left with handshakes and friendly smiles. This particular interaction had been about three years in the formation. Thankfully one fruit of the Holy Spirit is patience or longsuffering. We are not sure how many calendar cards and curses we had to endure to get this conversation and opportunity to witness, but it could be close to fifty.

This is just one of the “street stories” we have to pass along to encourage you to endurance, perseverance, and patience. We just never know when there might be some kind of a breakthrough with those who pass us by in the Living Room. And you just never know when the next time you see a particular person they might stop and talk with you, asking you about what you believe and why.

And by the way, I still believe there's definitely a place for street preaching.