The JESUS Film: "Show it Again"

One of my favorite ministries is the JESUS film project, which I have personally witnessed at work in powerful ways in China, Cambodia and Mexico. (More about that later in this blog.)

Every word in the film is from the gospel of Luke, and it includes at the end an invitation to receive Christ. In countries with low literacy, people can't read the Bible even if it's been translated into their language; but all of them can understand the JESUS Film, which is Scripture on a screen, God made visible. I read an amazing story from the JESUS Film about divine intervention in what seemed to be a hopeless situation:

A “JESUS” film team was returning home from showing the film to a village of unreached people. They were tired, but happy for what God had done. It was late at night, as they drove along the isolated road in a rough area…a time when thieves were active. Suddenly on the darkened road, a red light flashed behind them. It was the police.

“Where did you get this equipment? Did you steal it? Show us your receipts, your paperwork. Prove that you are the owners,” the police demanded.

Because the portable projection equipment and generators had been given by partners in America and shipped in a large batch, the team didn’t have individual receipts. Unable to prove they were not thieves, the police took it all, for the moment ending their ministry.

Over the next three weeks, the team leader repeatedly went to the police station. He showed them his ID, correspondence and other documents demonstrating they were the owners, all to no avail. “We don’t believe you. Now reveal what you are really doing. Show us how to use this equipment…present the film—if it is yours.”

The team leader agreed, saying, “My team will come tonight and set up the equipment, demonstrating that we are familiar with the projector, generator and the screen. We will show you the film.” The police gave instructions for the showing to be held in the barracks. 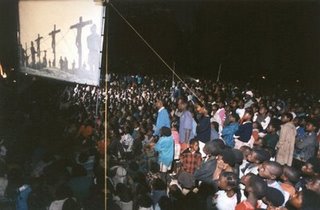 What a shock when the team arrived. They found 3,000 people waiting to see “JESUS.” After the film, the people were so touched that the commander said, “Show it again!” The next night there were about 6,000 people—police and family members attended. And in all, the team estimated that half of those in attendance responded and indicated decisions for Christ! Oh yes, the police returned all the equipment…with their blessings. The team is no longer stopped, and the gospel continues to go out in this area unhindered.
What a testimony of how God protects and uses the teams, and the equipment given by partners like you—so that unreached people might see and understand “JESUS” in their own language!

This is Randy again: The JESUS Film (www.jesusfilm.org) is arguably the single greatest evangelistic tool in history apart from the Word of God itself. I'll never forget years ago crowding into two homes in East Asia where the JESUS video was being shown by Christians to their neighbors. I counted 33 in one home and 37 in the other, eyes glued to the screen, listening in their own language to every word spoken by Jesus, straight from the Word of God. I have seen the work and the workers first-hand in several countries, and I can vouch for the integrity, vision, and biblical foundation of this ministry. I encourage you to consider if God would have you invest in eternity by getting involved in financial or prayer support for this wonderful work of the Lord.

And here's another ministry opportunity that's pretty cool: anyone with a cell phone can now text a Bible to a persecuted Christian. For just $5, Open Doors can print, ship, and deliver a Bible to a believer who does not have God's Word. For more information, go to the Open Doors website. 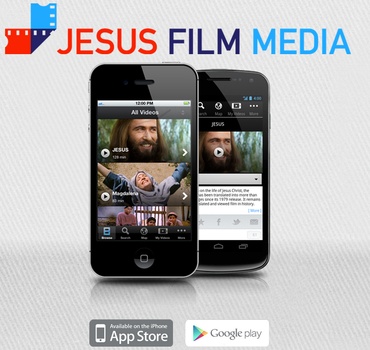 Now, THAT’S What I Call a Kingdom-Impacting App!

Recently I met with my long time friend and former director of The Jesus Film Project, Jim Green. He suggested I download the new Jesus Film app on my smartphone.
Invest in Eternity