Reflections the Day After Seeing the Movie, The Passion of The Christ

In Scripture Jesus is called our Creator, Lord, Master, Redeemer, Friend, Brother and many other things, and he is more in addition to what he is called.

My wife Nanci, whom I deeply respect, and who is also my best friend, sat beside me at The Passion yesterday on the end of the row in case she had to leave because of being emotionally overwhelmed. She didn’t have to leave, but cried steadily, from Gethsemane on. So did I. In our car, Nanci finally broke the silence and said, “I kept thanking Jesus for being my hero.”

He is far more than a hero, of course—but he certainly is that. The movie brought me closer to Jesus and to Nanci. I couldn’t have asked for anything more.

A thought on the biblical and historical shortcomings of the movie (including identifying Mary Magdalene as the adulterous woman, and that Jews were portrayed as understanding Latin and Romans Aramaic, when the one language they shared in common was actually Greek): I wish they weren’t there, of course, but, in my opinion, they were in secondary areas. Paul defines the gospel in 1 Corinthians 15:1-4 as the death, burial and resurrection of Jesus. Christ was portrayed in the movie as one sent from the Father to die for the sins of all men, to make all things new. (I loved taking those words of Jesus from Rev. 21 and putting them in his mouth on the bloody walk to the cross) Human depravity, and the equal vanity of secular and religious lostness, was unmistakable.

Jesus was clearly affirmed not as a victim, but as one in authority over Herod and Pilot and Caiaphas and the soldiers, the one who chose to die. It is one thing for people to surrender to deaths they have no choice concerning—but Jesus, who could have called twelve legions of angels to deliver him at any moment, showed incredible restraint and single-minded purpose in accomplishing redemption.

Christ’s humanity, e.g. in his tripping as a boy and as a man jokingly splashing his mother with water, was endearing. His claim to be the Messiah, and the reality of that claim, was decisive. Forgiveness was a major theme, and his granting Paradise to an unworthy criminal who couldn’t be baptized or pass out a tract or give an offering is a clear statement of salvation by grace through faith. Jesus was neither effeminate nor macho.

His battle against Satan, the crushing of the Serpent’s head (Genesis 3:15), and his victory in the resurrection were emphatic. And then there were the words that in the age of tolerance and non-exclusivity you would most expect to never make it into a contemporary movie about Jesus: “I am the way, the truth and the life; no one comes to the Father but by me.” The seven sayings of Jesus from the cross were there in all their biblical power.

In other words, the essentials of the gospel were preserved, presented in such a way that they could prompt—in a heart drawn by the Holy Spirit—confession, repentance, and an ACCURATE belief in Christ’s death and resurrection on our behalf. There is no doubt in my mind that seeking hearts could come (and are coming) to a genuine faith in Christ through this movie.

To say that of a popular box-office mainstream (non-Billy Graham or Left Behind-type) movie in this culture is nothing short of astounding. Almost unimaginable. It is up to the church to offer these people loving relationships, with grace and truth, in which that response can be kindled and explode into flames rather than smolder, then die in isolation from a believing community.

Afterward, I studied the faces of hundreds of people as they left, praying for them. I’d given a book to the young man beside me—big and tough and stoic for the first half of the movie (wasn’t going to be weak in front of his girl friend), but reduced to tears by the end. I don’t know the kid, but I love him, and I pray God will bring him to Himself.

The movie opened wide doors to the most important facts in the universe—who Jesus is, what he did, why he did it, and our desperate need to respond to Him. That’s only the difference between spending eternity in Heaven with God or in Hell without Him. May we look for every opportunity to walk through doors the Holy Spirit is opening by this film. A national conversation about Jesus and his death? Who but God could pull that off?

One cautionary thought. Though I certainly appreciate him and applaud his efforts in this movie, I think we should be very careful not to elevate Mel Gibson. We should align ourselves with the core of the movie itself—not Mel, who I think is sincere yet immature and vulnerable and, like all of us, capable of a fall. While I have seen some of Mel’s interviews and appreciated him, he is subject to the same temptations anyone else is. My warning is not a criticism of Mel Gibson—it is a criticism of we in the Christian community who would set him up as a spiritual giant he does not claim to be.

Let’s align ourselves wholeheartedly with the central truths this movie powerfully portrays—precisely because they are true to Jesus and God’s Word—but let’s be very careful and cautious when it comes to joining the Mel Gibson fan club. If Mel Gibson is discredited, and we have failed to maintain a separation between him and the biblical content of the movie, then the gospel will be discredited. (And even if this doesn’t happen—and I pray it won’t—elevating celebrities still isn’t healthy, for us or them.)

I think Mel Gibson is genuine, and I’m certain that God has used him with this film. But celebrity-worship is idolatry and is a dangerous game, already too rampant with our own evangelical celebrities. It is unworthy of the bride of Christ, who should have eyes only for Jesus. We pay a high price for pedestalizing trophy celebrities who have too often fallen, and dragged down with them a true gospel that we should never have linked so closely to them.

Mel Gibson is the latest hero of evangelicals—neither he nor we, and certainly not Jesus, will be well-served by fawning over him and undiscerningly aligning ourselves with him. (I am very uncomfortable with some of the unqualified and overly-effusive statements from Christian leaders who have had the “honor” and “privilege” to meet and talk with Mel Gibson.)

Gibson is probably being invited right now to speak at countless major Christian churches and gatherings. For his sake and ours I hope he says no. Now, if he’s being invited to meet with mature believers for private Bible study and prayer, with no cameras present, I’m all for that. Pray for him, absolutely, selectively agree with and support him, yes, but don’t make him—or anyone else—Christianity’s poster boy or spokesperson. We need to topple idols, not baptize them. Every time Christians get mesmerized by and try to capitalize on fame and celebrity, it ends up hurting them, biting us and undermines rather than elevates our Lord.

But because the central and dominant message of the movie is true to Scripture—to the most vital core of the gospel—we are right to respond in profound gratitude to God for bringing the person and work of Christ to theatres and secular talk shows across the nation, and around the world.

That is a staggering miracle, on the level of raising people from the dead, and is a testimony to the power of God. He has not lost interest in a world that is desperately seeking him, even when it doesn’t know it. (As Bruce Marshall wrote in his novel The World, the Flesh and Father Smith, “the young man who rings the bell at the brothel is unconsciously looking for God.”)

Finally, some passages related to seeking God, and therefore relevant to our thoughts concerning millions of nonbelievers seeing this movie:

But from there you will seek the Lord your God and you will find him, if you search after him with all your heart and with all your soul (Deuteronomy 4:29).

You will seek me and find me. When you seek me with all your heart (Jeremiah 29:13).

The God who made the world and everything in it, being Lord of heaven and earth, does not live in temples made by man, nor is he served by human hands, as though he needed anything, since he himself gives to all mankind life and breath and everything. And he made from one man every nation of mankind to live on all the face of the earth, having determined allotted periods and the boundaries of their dwelling place, that they should seek God, in the hope that they might feel their way toward him and find him. Yet he is actually not far from each one of us, for “In him we live and move and have our being” (Acts 17:24-28). 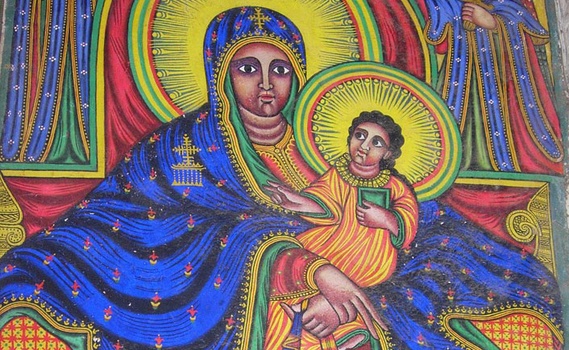 article April 26, 2019
Does any evidence exist for Mary, the mother of Jesus, being the "Black Madonna"? I have a Bible that shows illustrations and says most art depicting Mary as black was destroyed by Caucasian church leaders.
Invest in Eternity