The biggest disadvantage to the preborn child has always been that there’s no window to the womb. His fate is in the hands of those who cannot see him. But in recent years this has radically changed.

Time in 2002 and Newsweek in 2003 devoted cover stories to the breathtaking ultrasound images of preborn children.[1] Newsweek asked on its cover, “Should a Fetus Have Rights? How Science Is Changing the Debate.”

All arguments vaporize in the face of the unborn child.

The Power of Ultra-Sound

Rebekah Nancarrow received an $80 ultrasound at Planned Parenthood, but wasn’t allowed to see the results because “that will only make it harder on you.” Unsettled, she went to a Pregnancy Resource Center, where she was given a free ultrasound and allowed to view it. She said, “Had I not had the sonogram, I would have had the abortion. But that sonogram just confirmed 100 percent to me that this was a life within me, not a tissue or a glob.”[2]

According to Thomas Glessner, “Prior to ultrasound technology, pregnancy centers reported that of the abortion-minded’ women who came in for testing and advice, about 20 percent to 30 percent decided to remain pregnant. With pregnancy centers using ultrasound machines, that proportion has jumped to 80 percent or 90 percent.”[3]

Audrey Stout, a nurse, told me of an ultrasound she performed. This particular time the baby “opened and closed her mouth, had the hiccups, laid back as if in a beach chair, stretching her little legs. She even held up hands so Mom could count her fingers. The mother was visibly touched.”

When Audrey finished the scan she asked the woman what her plans were. “She replied, I am going to have my baby.’ I asked if the scan had made a difference; she said, Big time. I just came in here to get a pregnancy verification so I could go have an abortion.’”[4]

Thousands of stories like this have emerged from pregnancy centers across the country, which now use ultrasounds. Internet sites display astounding ultrasound images—some clearly show the unborn smiling, yawning, stretching, and sleeping.[5]

Still, denial remains surprisingly strong. When I showed an intrauterine photograph of an eight-week unborn child to a prochoice advocate—an intelligent college graduate—she asked me, “Do you really think you’re going to fool anyone with this trick photography?”

I told her she could go to Harvard University Medical School textbooks, Life magazine [6] or Nilsson’s A Child Is Born [7] and find exactly the same pictures. She didn’t want to hear it. Why? Because she was really saying, “That’s obviously a child in this photograph, and because I don’t want to believe abortion kills a child, I refuse to believe that’s a real photograph.”

What the Remains Indicate

A film called “The Gift of Choice” claims that the unborn is “a probability of a future person.” But what’s left after an abortion are small but perfectly formed body parts—arms and legs, hands and feet, torso and head. The physical remains indicate the end not of a potential life but of an actual life. If you don’t believe this, examine the remains of an abortion.[8] If you cannot bear to look, ask yourself why. If this were only tissue, rather than a dismembered child, it wouldn’t be hard to look at, would it?

To many prochoice advocates, the imagery is revolting propaganda. There is a sense among us, let us be frank, that the gruesomeness of the imagery belongs to the prolifers...that it represents the violence of imaginations that would, given half a chance, turn our world into a scary, repressive place. “People like us” see such material as the pornography of the prolife movement. But feminism at its best is based on what is simply true.... While images of violent fetal death work magnificently for prolifers as political polemic, the pictures are not polemical in themselves: they are biological facts. We know this.”[10]

The Right to Remain Ignorant

When a prolife candidate ran television ads showing aborted babies, people were outraged. A “CBS Evening News” reporter declared the abortion debate had reached a “new low in tastelessness.” Strangely, there was no outrage that babies were being killed...only that someone had the audacity to show they were being killed.

The question we should ask is not, “Why are prolife people showing these pictures?” but “Why would anyone defend what’s shown in these pictures?” The real concern about pictures of unborn babies isn’t that they’re gory, but that they prove the accuracy of the prolife position.

Intrauterine photos and ultrasounds aren’t hideous, but beautiful and fascinating. So do prochoice advocates welcomethese pictures? No. Abortion rights organizations have referred to ultrasound images as a “weapon” in the hand of the prolife movement.[11] Businesses now offer 4-D ultrasound professional photographs of unborn children smiling, sneezing, and yawning. In a PBS discussion, one panelist claimed that such pictures reflected “an unhealthy preoccupation with the baby.”[12] Notice the terminology: “the baby.” Ultrasound technologies are dismantling the age-old prochoice argument, “It isn’t a baby.” People are saying, “What are you talking about? Of course it’s a baby—justlook!”

I visited a college campus where a prolife group had set up displays of aborted babies alongside the victims of the Nazi death camps, the Killing Fields, American slavery, and other historical atrocities. Signs with warnings about the graphic photographs were posted clearly, so all those who looked did so by choice. I witnessed the profound effect on students and faculty, including those who didn’t want to believe what they were seeing.

Animal rights advocates argue that in order to make their case they must show terrible photographs, such as baby seals being clubbed to death. If there’s a place to look at such pictures, isn’t there a place to look at pictures of abortions? And if abortion isn’t killing babies...then why are these pictures so disturbing?

(Randy Alcorn, adapted from Why ProLife? [Sisters, OR: Multnomah Publishers, 2005]) 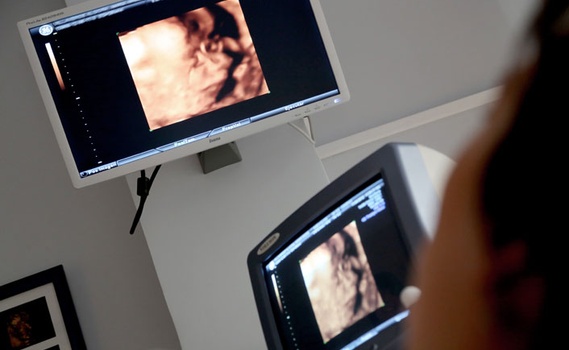 article July 5, 2010
Obstetric ultrasound is a safe and noninvasive procedure using high frequency sound waves to provide a picture of the moving fetus on a monitor screen.

What Is Your Opinion of Organizations like the Center for Bioethical Reform?

audio May 4, 2010
Randy Alcorn answers the question, "What is your opinion of organizations like the Center for Bioethical Reform?" Original interview conducted by Verite Studios.

Is the internet useful to the prolife cause?

audio May 3, 2010
Randy Alcorn answers the question, "Is the internet useful to the prolife cause?" Interview conducted by Verite Studios.
Invest in Eternity