A Tribute to George Verwer, Founder and Former Director of Operation Mobilization 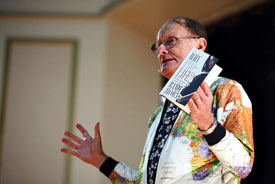 George Verwer is the Founder of Operation Mobilization (OM), a ministry of cross-cultural evangelism, church planting and discipleship training. After serving as the International Director from the beginning, George stepped down in 2003 and continues in his ministry with OM, speaking and raising the profile of world missions.

Originally from the USA, George and his wife, Drena, live in Bromley, Kent, a suburb of London. His ministry takes him to various countries in Asia, the Middle East, Europe and North America. Through these travels, he blends preaching and ministry to Christian leaders and churches. George has a deep desire for vital, revolutionary Christianity in himself and others.

For seventeen years Dorothea Clapp, a lady in the United States, prayed for the high school in her town, that the students would be saved and become messengers of the gospel to the ends of the earth. One day, she sent a copy of the Gospel of John to a student, George Verwer. Less than three years later, he gave his life to Christ at a Word of Life meeting in Madison Square Garden in New York where Billy Graham preached. At Moody Bible Institute he met up with several others who had his heart for reaching the world. Together, they decided God would have them give their school vacations for evangelism. Their first trip took them and 10,000 Spanish Gospels of John to Mexico. People eagerly accepted the Gospels, and hundreds of contacts were made. These trips continued every Christmas and summer. Within two years, Christian bookshops, radio broadcasts and national workers resulted. These students returned to college with a desire to be more diligent in study and prayer, founding OM's roots of discipleship training with evangelism even before the name Operation Mobilization came into existence.

Verwer, with his wife, Drena, and a small group of people in their early twenties, went to Spain in 1960. That fall a group of young people, mainly Spanish, spent hours addressing envelopes using the telephone directory. A tract with the offer of a correspondence course or a Gospel was placed in each. The response was so great that within eight months four young Spaniards were working on the project full-time. During the first two years more than 20,000 people requested Gospels and correspondence courses. God made a way for a Christian bookshop and for advertising for that bookshop all over Madrid.

Because Verwer and the others were burdened not just for Spain or Mexico, they pioneered the idea of short-term mission projects utilizing large numbers of short-term workers. They prayed for 100 young workers to join them to reach all of the larger towns of Western Europe with Christian literature during the first summer. Nearly 200 people came to the mountains of Madrid for the outreach, which began with prayer and Bible study in the mountains, followed by division into small traveling teams to different countries. This effort for evangelism and the following summer outreaches were called Operation Mobilization, the name that ultimately labeled the entire movement.

During that summer, 25 million tracts were distributed with offers for a correspondence course or a Gospel. By the end of the summer there were thousands of replies from several different countries. Over 50 different Christian groups took part in the follow-up work.

Larger goals were set for the next outreaches, and where 1,000 workers were prayed for, 2,000 came from 30 nations. The summer of 1963 brought forth a surge of evangelism as 80,000 villages were reached with teams bringing tons of literature and a heart to serve.

200 people stayed on after the outreach for year-long programs in areas like Turkey, Iran, Lebanon, Israel, India and Europe. Muslim countries had long been a prayer target of OM leadership.

OM had its first missionaries to Turkey in 1961. In 1963, the first couple went to Iran. From there, literature distribution, full-time workers, new churches, Bible study groups, correspondence courses and conferences were established in the Middle East. A significant ministry to Afghan refugees began in Pakistan after the Russian invasion. Longer-term programs developed in Europe at the same time. An empty paper factory in Belgium became the central office to coordinate efforts and prepare the vehicles. 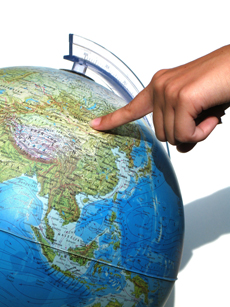 OM moved into India via an overland trek in trucks from Belgium, carrying literature. OM India is now one of the largest fields, with 700 full-time workers. Until recently OM distributed literature off the back of large trucks very publicly. OM has Good Shepherd Ministries in slums all over India, providing education, food for children, and hope in Jesus Christ to thousands of children. Churches are often started in the same rooms as the schools.

OM began a ship ministry with the launching of the LOGOS in 1970, a ship to be used for world evangelism. The LOGOS visited hundreds of ports, selling and giving away literature to hundreds of people in Southeast Asia, China, Japan and many others. In 1977, a second, larger ship, the DOULOS, was launched, carrying on the same mission as the LOGOS, in other ports of the world. Both ships would offer book sales, conferences, tours, and the people on board would reach out to the nationals with literature distribution on shore. As with all workers in OM, the marine professionals worked as volunteers. In 1988, the LOGOS was shipwrecked off the south coast of South America, but not one life was lost. By the end of that same year, funds were raised for the purchase of a third ship, christened the LOGOS II.

OM now works in over 85 countries, including Latin America, Central Asia, the former Soviet states, the Middle East, and secular Europe. At any given moment OM has approximately 3,500 workers. Summer outreaches like those begun in 1957 in Mexico still continue around the world. It is estimated that well over 125,000 people have participated in an OM outreach in the last 40+ years and more than 100 ministries have been launched by people who got their start in missions with OM.

(The following is a letter written by Randy Alcorn to George Verwer in honor of his faithful service.)

There's nothing better I can say of a brother than "He draws me closer to Jesus." You do. I think of that song "Thank you for giving to the Lord." You'll meet so many people in heaven that will say "thank you." When I see you, I'll say it too.

I've enjoyed over the years the phone calls and the personal chats at places we've connected, including my home church. Whenever you've called and my assistant or receptionist said, "George Verwer on line 2," I've smiled and wondered where you're calling from. India? A church parking lot in Scotland? It's always a joy to speak with you.

I've related to others one of our conversations I'll always remember. It ended with you telling me, "God bless you, brother...now don't do anything stupid!" It's a great line, true to Scripture (Proverbs in particular). It reminds me sin is always stupid and obedience is always smart. We need to raise the bar high for each other, and pray for God's grace and empowerment, cheering each other on to jump that bar.

Thanks for raising the bar high, George, to the glory of Jesus. God bless you, brother. I know you won't retire until at least ten minutes after you die. As long as you're still in this world you're still in the battle...now don't do anything stupid!

An Evening with George Verwer and Randy Alcorn

video May 30, 2013
Enjoy this video version of an evening event with George Verwer (founder of Operation Mobilization) and Randy Alcorn, featuring interactive Q&A related to The Treasure Principle

video February 25, 2011
In this video, George Verwer promotes Randy Alcorn's book Why ProLife? and challenges viewers to become more serious about the issue of abortion.