A Young Woman’s Story of Relinquishing Her Baby for Adoption

Some people may think that at the age of 20, you are not too young to have a baby, but that was not the case with me.  My name is Ann Marie Jones, and at the age of 20 I was Ann Marie Holevas.  I was newly sober and drug free and I was…pregnant.  Scared?  Yes.  Terrified?  Definitely. How was I going to raise a baby?  I had depended on drugs and alcohol for years to fill the void in my life.  Would a baby fill the void?  Was that fair to think a baby, a young life so innocent, could fill the empty void that was missing in my life?  That’s a lot of pressure for an innocent child.  What about abortion?

I had never believed in abortion growing up.  At 18 days the little heart starts beating—to me, that is not a “blob of cells” as I’ve heard some people who justify abortion call it.  The heart beats at 18 days, and she was alive.  Who was I to play God and get rid of it?  I did open the phone book to the yellow pages for “abortions”…I threw the phone book across the room.  I participated in the act that caused me to get pregnant, so it was time for some tough decisions and to put my belief in prolife to the test.  That didn’t mean I wasn’t still terrified.  What would I tell my parents?

I felt free, though, after realizing I couldn’t have an abortion.  The father of the baby and I had a long discussion about our options.  Were we prepared to be parents?  Could I give this child the love, the time, the attention she would need, along with being fiscally responsible for her?  Was it the State of Oregon’s job to raise this child?  Should they be fiscally responsible for her?  I don’t think the State of Oregon was there when she was conceived, so whose responsibility is it to take care of her?

At this point, my mind was so messed up, that I turned to someone I hadn’t talked to in a long time…God.  I finally started praying.  I couldn’t do this on my own.  I had hurt my parents badly by all the drugs and drinking I had done, I wasn’t that close to my siblings, and my “friends” were more like drinking buddies.  I couldn’t stand it when nighttime fell because then I had to go to bed to be alone with my thoughts, but that’s when I started relying more on God.

I woke up one morning and just felt that adoption was something I should look into.  I had finally confided in my parents at this point, and my mom referred me to a family friend who could put me in touch with an adoption agency.  I met with the family friend for about an hour and left with the phone number of someone I could contact.  I kept putting it off because 9 months seems like a long time, but I finally couldn’t put it off any longer.  I met with a wonderful counselor who put me in touch with people who really wanted and would love my little girl.  Boy, is it hard having a notebook full of anxious people who are hoping and praying that you choose them!  How do we decide?  This decision affects so many lives, but finally the father of the baby and I decided on a couple, and we were able to meet with them at a local church.

How did we make that decision?  I honestly don’t know.  They looked “normal” in their picture, they seemed stable, but mainly it’s a gut feeling and you just “know”.  Our meeting went well and although I’ve been told I was very firm when I told them I hadn’t 100% made up my mind, I felt very relieved that they seemed solid and would love my baby girl.  That was the hardest thing ever—probably for them too!  Here they are interviewing for a child—something that came so easily for me, yet not so easily for them.  Let me tell you one thing, though…this child was loved!

Did I give her up for adoption because I didn’t want her? Absolutely not.  I gave her up because I was very immature, had no means of taking care of her, and I wanted a better life for her.  I didn’t think it was fair to raise her when I couldn’t even take care of myself.  Do I regret the decision?  No, I don’t regret it.  I miss her every day and I think about her every day, but I don’t regret giving her to a couple who love her and were in a place to take her in.  I consider everyone involved very lucky—the parents are lucky because their dreams of having a child came true.  I was lucky because I knew she would be raised in a caring and nurturing environment with two parents who would love her unconditionally.  I also consider the little girl lucky—I believe I did what was best for her.  She has two parents who adore her and another “mom” who has prayed for her every single day.

I was very clear when I went into labor that I didn’t want the adoptive parents at the hospital.  This was “my” time, and I didn’t want to share it.  I went into labor at 11:45 at night, gave birth to her at 7:45 a.m. and gave her up to start her new life the next day.  Nobody can take back that first day of life with her.  She was mine, but I always remembered she was on borrowed time.  I knew God had great things in store for her and I was blessed to have the 9 months and 1 day with her.  God used me to bring her into this world, and it was her destiny to go with other parents, and what incredible parents they’ve been to her.

I was so lucky to have met her in the spring of last year.  We keep in touch to this day…thank goodness for cell phones and the ability to text!  That’s our main way of keeping in communication with each other.  She’s a beautiful young woman who looks like me, I might add!  She’s going to be a senior in high school and the time has flown by.  I have been so blessed that her parents have kept in contact with me during her life and I’ve received pictures and updates every year.

Where am I at in my life?  After still struggling with the direction of my life after giving her up for adoption, I am happily married with three boys and am walking with the Lord.  During all the difficult times in my life, especially with giving her up for adoption (no doubt, the hardest decision I’ve ever made in my life) I realized He was there with me the entire time.  Even during my struggles, I insisted on a Christian adoption family and a Christian adoption agency.  God was guiding me even way back then!

After the relinquishment, I had some dark nights of despair, but I never had to make an appointment with Jesus.  I never had to worry about the time—I could reach out to Him anytime, anywhere.  Is my life perfect today?  No, but I know in the good times and bad, He is always there for me.  He has it all under control, even though I still sometimes forget that!

Thank you for sharing in my story.  Although I found myself facing the toughest decision of my life, God has used it for His glory.  Never give up, even when the path ahead of you looks bleak and barren.  Having my little girl and giving her up for adoption has turned into the biggest blessing in my life.  Adoption can be and is a truly miraculous gift.

Why is adoption a threat to pro-choice advocates?

Randy Alcorn answers the question,"Why is adoption a threat to pro-choice advocates?" 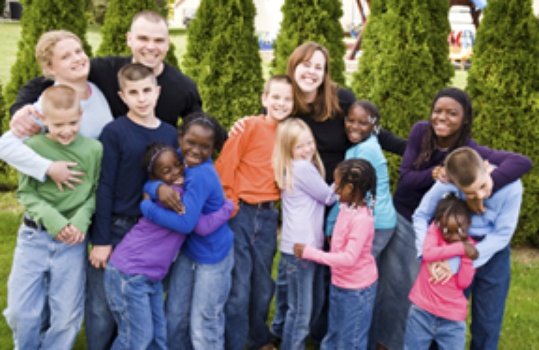 Adoption: An interview with Randy Alcorn

I think adoption is hugely connected with the prolife movement. Being known as prolifers, we want to be completely consistent with our message. If we’re saying that these so-called “unwanted children” should be brought into the world, then of course we should be thinking of what we can do to care for those who need to be placed somewhere because their parents can’t care for them.
Invest in Eternity