What Is Faith? Why Should I Believe in Christianity and Not Some Other Religion? 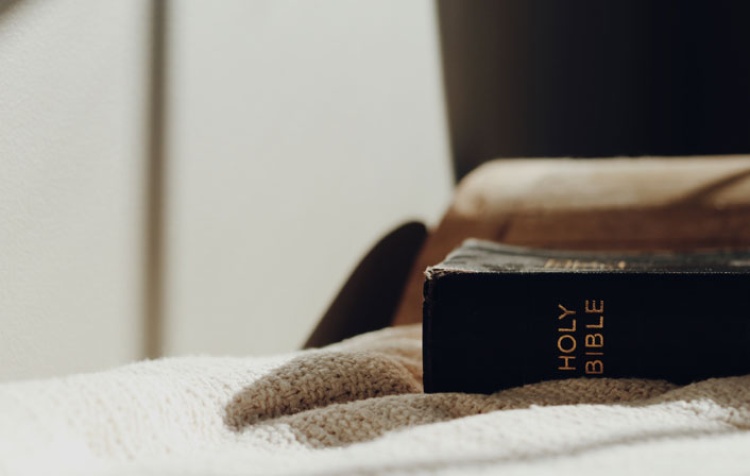 First of all I would recommend the book More Than a Carpenter by Josh McDowell.

Next, I’d like to address the issue of “faith” and second, your question, “Why should we believe in Christianity and not some other religion?”

A person may know all the facts of the Bible and believe them to be true and still spend eternity in Hell. A person may believe that God exists, that Jesus lived, died, and was resurrected from the dead. A person can be very religious and still not know Christ.

First, God says we have all sinned. We are all guilty of breaking His Laws. Because of that we deserve to be punished in hell forever. And we can do nothing to change that. We are hopelessly lost (Rom.3:10; 3:23; 6:23a).

That is not good news. But there is good news. The good news (gospel) is that God loves us and has done everything necessary for us to be forgiven, saved, and go to heaven. God sent Jesus to pay for our breaking of His laws. Jesus was executed in our place. His death 2000 years ago paid for the sins of all men everywhere (Rom.6:23b; 5:8; John 3:16).

But in order to be forgiven/saved you must believe these things to be true and repent of your sin. Remember that it was our sin that made it necessary for the only, perfect, sinless, Son of God to be executed. To repent means to be deeply grieved that you have sinned and be willing to turn from a life of sin to a life of obedience to God (note: in Matthew, Mark, Luke, John, and in the book of Acts, the good news/gospel starts with, (“repent and believe...”)

Now to the question, “Why should I believe in Christianity and not some other religion?” This is an excellent question. Christianity rises or falls on the resurrection of Jesus Christ from the dead. If this event is historically true, it makes all other religions false, because Jesus Christ claimed to be the one and only ways to God the Father. To prove this, He predicted He would come out of the grave alive three days after He was executed. And He did.

The resurrection of Christ is provable by overwhelming evidence (read Evidence That Demands a Verdict by Josh McDowell or The Case for Christ by Lee Strobel). What does the resurrection mean? It means Christ is God and since He said He is the only way to forgiveness of sins and the only way to heaven - all other religions are false. Jesus said, “I am the Way, the Truth, and the life; no man comes to the Father (God) except through Me.” (John 14:6)

Here is an article from the Christian Research Institute that will hopefully be of help to you.

M-A-P-S to Guide You through Biblical Reliability

Use M-A-P-S to guide you through Biblical reliability: Manuscripts, Archaeology, Prophecy, Statistics Have you tried to show someone the historical reliability of the Scriptures, and not known where to start? A quick trip to your local well-stocked Christian bookstore likely will overwhelm you. Where among the dozens of impressive, comprehensive reference books should you start? Fortunately, while there is a wealth of information available to support the reliability of Scripture, you don’t have to burn, the midnight oil to give a reasonable answer to those who ask, “How can we know the Bible is reliable?” Four basic principles chart your way to understanding basic biblical reliability.

To help you remember, I’ve developed the simple acronym “MAPS.” Remember the word MAPS and you will be able to chart the Bible’s reliability.

Manuscripts relates to the tests used to determine the reliability of the extant manuscript copies of the original documents penned by the Scripture writers (we do not possess these originals). In determining manuscript reliability, we deal with the question: How can we test to see that the text we possess in the manuscript copies is an accurate rendition of the original? There are three main manuscript tests: the Bibliographic, Eyewitness, and External (a second acronym—BEE—will help you remember these).

The bibliographic test considers the quantity of manuscripts and manuscript fragments, and also the time span between the original documents and our earliest copies. The more copies, the better able we are to work back to the original. The closer the time span between the copies and the original, the less likely it is that serious textual error would creep in. The Bible has stronger bibliographic support than any classical literature—including Homer, Tacitus, Pliny, and Aristotle.

The same is true of the New Testament text. The abundance of textual witnesses is amazing. We possess over 5,300 manuscripts or portions of the (Greek) New Testament—almost 800 copied before A.D. 1000. The time between the original composition and our earliest copies is an unbelievably short 60 years or so. The overwhelming bibliographic reliability of the Bible is clearly evident.

The eyewitness document test (“E”), sometimes referred to as the internal test, focuses on the eyewitness credentials of the authors. The Old and New Testament authors were eyewitnesses of—or interviewed eyewitnesses of—the majority of the events they described. Moses participated in and was an eyewitness of the remarkable events of the Egyptian captivity, the Exodus, the forty years in the desert, and Israel’s final encampment before entering the Promised Land. These events he chronicled in the first five books of the Old Testament.

The New Testament writers had the same eyewitness authenticity. Luke, who wrote the Books of Luke and Acts, says that he gathered eyewitness testimony and “carefully investigated everything” (Luke 1:1-3). Peter reminded his readers that the disciples “were eyewitnesses of [Jesus’] majesty” and “did not follow cleverly invented stories” (2 Pet. 1:16). Truly, the Bible affirms the eyewitness credibility of its writers. The external evidence test looks outside the texts themselves to ascertain the historical reliability of the historical events, geographical locations, and cultural consistency of the biblical texts. Unlike writings from other world religions which make no historical references or which fabricate histories, the Bible refers to historical events and assumes its historical accuracy. The Bible is not only the inspired Word of God, it is also a history book—and the historical assertions it makes have been proven time and again.

Returning to our MAPS acronym, we have established ,the first principle, manuscript reliability. Let us consider our second principle, archaeological evidence. Over and over again, comprehensive field work (archaeology) and careful biblical interpretation affirms the reliability of the Bible. It is telling when a secular scholar must revise his biblical criticism in light of solid archaeological evidence.

For years critics dismissed the Book of Daniel, partly because there was no evidence that a king named Belshazzar ruled in Babylon during that time period. However, later archaeological research confirmed that the reigning monarch, Nabonidus, appointed Belshazzar as his co-regent whi1e he was away from Babylon.

One of the most well-known New Testament examples concerns the Books of Luke and Acts. A biblical skeptic, Sir William Ramsay, trained as an archaeologist and then set out to disprove the historical reliability of this portion of the New Testament. However, through his painstaking Mediterranean archaeological trips, he became converted as—one after another - of the historical statements of Luke were proved accurate. Archaeological evidence thus confirms the trustworthiness of the Bible.

The third principle of Bible reliability is Prophecy, or predictive ability. The Bible records predictions of events that could not be known or predicted by chance or common sense. Surprisingly, the predictive nature of many Bible passages was once a popular argument (by liberals) against the reliability of the Bible. Critics argued that the prophecies actually were written after the events and that editors had merely dressed up the Bible text to look like they contained predictions made before the events.

Nothing could be further from the truth, however. The many predictions of Christ’s birth, life and death (see below) were indisputably rendered more than a century before they occurred as proven by the Dead Sea Scrolls of Isaiah and other prophetic books as well as by the Septuagint translation, all dating from earlier than 100 B.C.

Since Christ is the culminating theme of the Old Testament and the Living Word of the New Testament, it should not surprise us that prophecies regarding Him outnumber any others. Many of these prophecies would have been impossible for Jesus to deliberately conspire to fulfill - such as His descent from Abraham, Isaac, and Jacob (Gen. 12:3; 17:19; Num. 24:21-24); His birth in Bethlehem (Mic. 5:2); His crucifixion with criminals (Isa. 53:12); the piercing of His hands and feet at the crucifixion (Ps. 22:16); the soldiers’ gambling for His clothes (Ps. 22:18); the piercing of His side and the fact that His bones were not broken at His death (Zech. 12:10; Ps. 34:20); and His burial among the rich (Isa. 53:9). Jesus also predicted His own death and resurrection (John 2:19-22). Predictive Prophecy is a principle of Bible reliability that often reaches even the hard-boiled skeptic!

Our fourth MAPS principle works well with predictive prophecy, because it concerns the Statistical probability that any or all of the Bible’s very specific, detailed prophecies could have been fulfilled through chance, good guessing, or deliberate deceit. When you look at some of the improbable prophecies of the Old and New Testaments, it seems incredible that skeptics—knowing the authenticity and historicity of the texts—could reject the statistical verdict: the Bible is the Word of God, and Jesus Christ is the Son of God, just as Scripture predicted many times and in many ways.

The Bible was written over a span of 1500 years by forty different human authors in three different languages (Hebrew, Aramaic, and Greek), on hundreds of subjects. And yet there is one consistent, noncontradictory theme that runs through it all: God’s redemption of humankind. Clearly, Statistical probability is a powerful indicator of the trustworthiness of Scripture.

The next time someone denies the reliability of Scripture, just remember the acronym MAPS, and you will be equipped to give an answer and a reason for the hope that lies within you (1 Pet. 3:15). Manuscripts, Archaeology, Prophecy, and Statistics not only chart a secure course on the turnpikes of skepticism but also demonstrate definitively that the Bible is indeed divine rather than human in origin.

How Can I Believe in Something I Don’t Fully Understand?

I’m a deep thinker, and like to research and understand things. My friend tells me I shouldn’t rely on only my intellect as my ultimate authority, but if not, then what should I rely on? At the end of the day aren’t we all kind of stuck in terms of relying on whatever intellect is available to us?

audio July 16, 2014
Randy answers the question “What is unique about Christianity?” during an interview on Moody Radio in June, 2014, marking the paperback release of his If God Is Good book.

article March 8, 2012
Question from a reader: I am an atheist and I accept all regardless of background, religion, culture, sexuality, etc. If you truly love someone then these things should not matter. I have been free from religion for 18 years now. I only hope more people see the truth and get out of the cult of religion so that they are able to live their lives how they want.
Invest in Eternity