What Is the Chinese House Church Song? 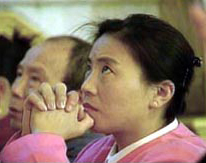 I am doing a book discussion group at my church on Safely Home.  What is the song the house churches sing when they get together?

The name of the song is called “Martyrs For the Lord.” It can be found in a book called China’s Christian Martyrs by Paul Hattaway.

Martyrs for the Lord

Those apostles who loved the Lord to the end
Willingly followed the Lord down the path of suffering.
John was exiled to the lonely isle of Patmos.
Stephen was stoned to death by an angry crowd.

Matthew was stabbed to death in Persia by a mob.
Mark died as horses pulled his two legs apart.
Doctor Luke was cruelly hanged.
Peter, Philip and Simon were crucified on a cross.

Bartholomew was skinned alive by the heathen.
Thomas died in India as five horses pulled his body apart.
The apostle James was beheaded by King Herod.
Little James was cut in half by a sharp saw.

James the brother of the Lord was stoned to death.
Judas was tied to a pillar and shot by arrows.
Matthias had his head cut off in Jerusalem.
Paul was a martyr under Emperor Nero.

I am willing to take up the cross and go forward
To follow the apostles down the road to sacrifice
That tens of thousands of precious souls can be saved
I am willing to leave all and be a martyr for the Lord.

For more information about this book and persecution in China, see Randy Alcorn's book Safely Home.