The Original 'Unknown' god of China: An Ancient Pictogram Script Points to the Bible

Mystery concerns the 450-year-old Temple of Heaven complex in Beijing, China. Why did the emperors sacrifice a bull on the great white marble Altar of Heaven at an annual ceremony, the year’s most important and colourful celebration, the so-called ‘Border Sacrifice’? This rite ended in 1911 when the last emperor was deposed. However, the sacrifice did not begin a mere 450 years ago. The ceremony goes back 4,000 years. One of the earliest accounts of the Border Sacrifice is found in the Shu Jing (Book of History), compiled by Confucius, where it is recorded of Emperor Shun (who ruled from about 2256 BC to 2205 BC when the first recorded dynasty began) that ‘he sacrificed to ShangDi.’ 1

Who is ShangDi? This name literally means ‘the Heavenly Ruler.’ By reviewing recitations used at the Border Sacrifice, recorded in the Statutes of the Ming Dynasty (AD 1368), one may begin to understand the ancient Chinese reverence for ShangDi. Participating in this rite, the emperor first meditated at the Temple of Heaven (the Imperial Vault), while costumed singers, accompanied by musicians, intoned:

‘To Thee, O mysteriously-working Maker, I look up in thought....With the great ceremonies I reverently honor Thee. Thy servant, I am but a reed or willow; my heart is but that of an ant; yet have I received Thy favouring decree, appointing me to the government of the empire. I deeply cherish a sense of my ignorance and blindness, and am afraid, lest I prove unworthy of Thy great favours. Therefore will I observe all the rules and statutes, striving, insignificant as I am, to discharge my loyal duty. Far distant here, I look up to Thy heavenly palace. Come in Thy precious chariot to the altar. Thy servant, I bow my head to the earth reverently, expecting Thine abundant grace....O that Thou wouldest vouchsafe to accept our offerings, and regard us, while thus we worship Thee, whose goodness is inexhaustible!’ 2

Thus we find the emperor worshipping ShangDi. Can we possibly trace the original intention of this magnificent ceremony of antiquity? As the emperor took part in this annual service dedicated to ShangDi, the following words were recited, clearly showing that he considered ShangDi the Creator of the world:

‘Of old in the beginning, there was the great chaos, without form and dark. The five elements [planets] had not begun to revolve, nor the sun and moon to shine. You, O Spiritual Sovereign, first divided the grosser parts from the purer. You made heaven. You made earth. You made man. All things with their reproducing power got their being’.3

For the Christian, the above recitation sounds strangely familiar. How closely it reads to the opening chapter of the biblical Genesis! Note the similarity with excerpts from the more detailed story as recorded in the Hebrew writings:

‘In the beginning God created the heaven and the earth. The earth was without form, and void; and darkness was on the face of the deep....

‘And God said, “Let the waters under the heaven be gathered together unto one place, and let the dry land appear”; and it was so. And God called the dry land Earth, and the gathering together of the waters called He Seas....

ShangDi, the Creator-God of the Chinese, surely appears to be one and the same as the Creator-God of the Hebrews. In fact, one of the Hebrew names for God is El Shaddai, which is phonetically similar to ShangDi. Even more similar is the Early Zhou pronunciation of ShangDi which is ‘djanh-tigh’ [Zhan-dai].4 Another name for their God which the ancient Chinese used interchangeable with ShangDi was Heaven (Tian). Zheng Xuan, a scholar of the early Han dynasty said, “ShangDi is another name for Heaven (Tian)”.5 The great philosopher Motze (408-382 BC) also thought of Heaven (Tian) as the Creator-God:

‘I know Heaven loves men dearly not without reason. Heaven ordered the sun, the moon, and the stars to enlighten and guide them. Heaven ordained the four seasons, Spring, Autumn, Winter, and Summer, to regulate them. Heaven sent down snow, frost, rain, and dew to grow the five grains and flax and silk so that the people could use and enjoy them. Heaven established the hills and river, ravines and valleys, and arranged many things to minister to man’s good or bring him evil.’ 6

How did ShangDi create all things? Here is one further recitation from the ancient Border Sacrifice rite:

‘When Te [ShangDi], the Lord, had so decreed, He called into existence [originated] heaven, earth, and man. Between heaven and earth He separately placed in order men and things, all overspread by the heavens.’ 7

Note that ShangDi ‘called into existence,’ or commanded heaven and earth to appear.

Compare this with the way the Hebrew text describes the method of creation by El Shaddai, who, we suspect, is identical with ShangDi, and the similarity in name and role would suggest:

We have not yet explained the reason for the emperors’ bull sacrifice to ShangDi. Let us compare this Chinese sacrifice with the instruction given by God to the Hebrews:

‘Take thee a young calf for a sin offering, and a ram for a burnt offering, without blemish, and offer them before the LORD’ (Leviticus 9:2)—a practice which began in earliest times (Genesis 4:3,4; 8:20).

The origin of the Border Sacrifice would appear to be explained in the book, God’s Promise to the Chinese.8 The authors, Nelson, Broadberry, and Chock have analyzed the most ancient forms of the pictographic Chinese writing and found the foundational truths of Christianity. In these ideograms, which date from before the time of Moses—we have the entire story of creation, the temptation, and fall of man into sin, and God’s remedy for sin in the animal sacrifices, which pointed to the coming Savior, Jesus Christ. All the elements of the Genesis narrative are found recorded, and still in use, in the Chinese character-writing.

The associated box shows some startling realities about the written Chinese language, indicating that we are all related—and not so long ago. All people in the world, not just the Chinese, are descended from the inhabitants of Babel, the first civilization after the Flood. God first gave His promise of a coming saviour, the ‘Seed of the Woman,’ in Genesis (3:15). The foreshadowed sacrifice of the coming Lamb of God, Creator and Saviour, is as old as mankind.

Should a Chinese person tell you that Christianity is a ‘foreigner’s religion,’ you can explain that the Chinese in antiquity worshipped the same God as Christians do today. Like the Hebrews often did, the ancestors of today’s Chinese wandered off after false gods; the memory of who their original God was dimmed with time.9 The ancient Chinese script gives powerful evidence for the historical truth of Genesis.

God’s Promise to the Chinese (Confirms the idea that the ancient Chinese indeed incorporated an unusual knowledge of sacred history into their written language.)

9 This was of course the near-universal experience of all tribes and nations.

Ethel Nelson, M.D., F.A.S.C.P., is a retired pathologist living in Tennessee who was a medical missionary in Thailand for 20 years. 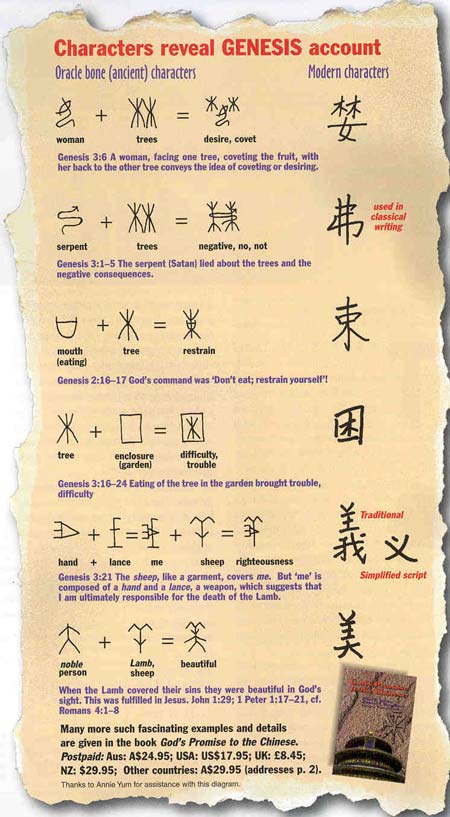 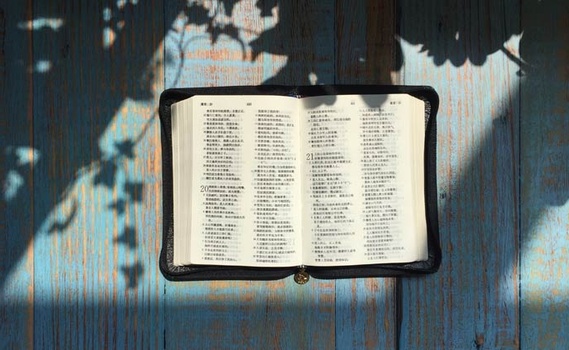 I Would Like to Help Provide Bibles for China. What Organizations Do You Recommend?